I yearly contribute to the Honor Roll Project of  Heather Wilkinson Rojo – the purpose is to photograph and transcribe Veteran names for family research. Heather’s Blog can be found at http://nutfieldgenealogy.blogspot.com/

This lone soldier, at a height of 16′ 1/2″, stands atop a granite pedestal figure. He is composed of the Neo-Classical Revival architectural design with a with a bronze rifle at his side. The monument stands on the small town green in Prospect at 23 Center Street, Rt. 69.

The Prospect War Memorial is a symbol of respect and honor by the local community to their sons who served from the Revolutionary War to later wars; names are engraved on both sides of the monument. 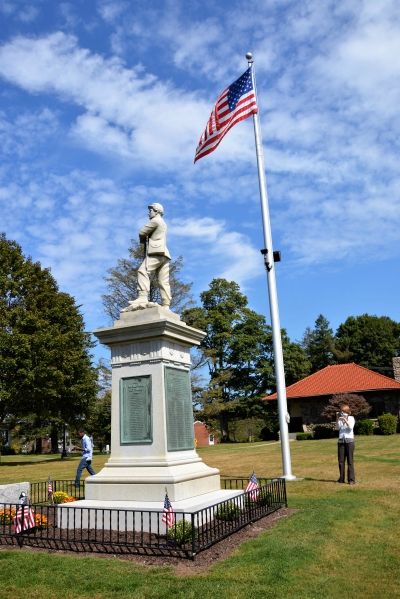 While the sun wasn’t cooperating when I took the front view of the War Memorial, it was like a different day in shooting from the side, plus I was able to capture Assistant Professor Jodi and Lynandro in this shot; they were interviewing me on this war memorial shoot.

This project will include information and documents on anyone who served in WWI, they do not need to have been a resident of Connecticut. Anyone who resides in the state today may have their ancestors information digitalized to be included in their state digital archives. I was happy to hear that, as my grandfather, Edgar Thomas McKinley, served from the state of Georgia; that means I will be able to include him, as well as my husband’s grandfather, Giuseppe Cambino, serving from Connecticut. 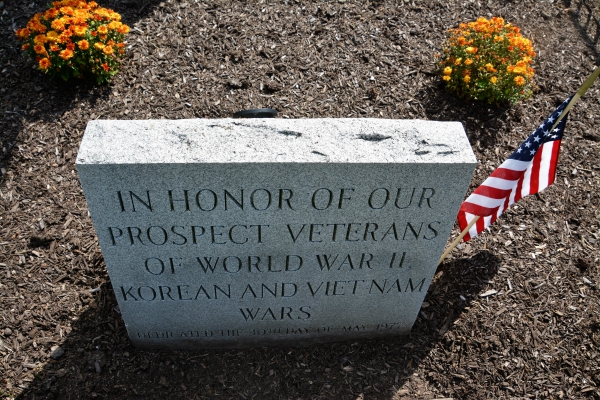 This memorial stone sits inside the metal face, in front of the Prospect War Memorial

As I’ve never been asked or given an interview before, I was quite honored in being asked, but a little nervous at the aspect of being on the other side of the interviewing process. I was quickly put at ease with the questions and my answers flowed out… unlike the apprehension, I had before arriving.

The Connecticut State Library has set to tell the stories of our ancestors who served on the front, as well as at home, during World War I. They are now in the process of holding “digitization days” around the state and also are in partnerships with community groups, local historical museums, and libraries. Local events are being held so residents may bring in their family photos, letters and any family history saved from WWI…. they will digitize your information and include it in the State Library’s online archives; it will then be free for everyone to access for public use. 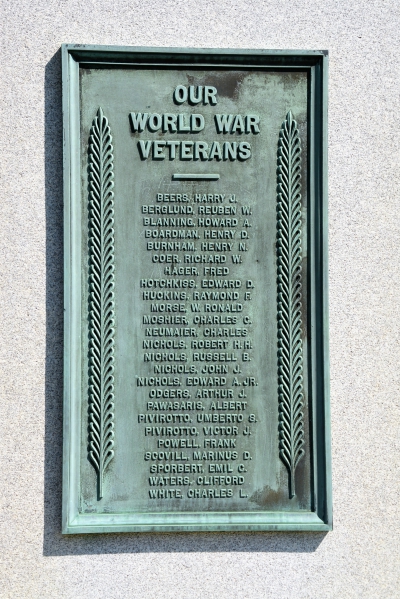 This statue was erected late in 1906, but not dedicated until Memorial Day in 1907. The combination chosen of stone and bronze in the figure is considered to be somewhat unusual, as usually, the rifle is of the same material as the figure; in this monument the rifle is bronze. Other unusual details are that the trousers are gathered at the top of the boots, the figure wears a jacket rather than an overcoat and the rifle rests in a parade rest position. The builder seemed to have mixed and matched how he wanted this soldier to be depicted as if they had chosen a true “parade rest” style, he would have also worn an overcoat instead of the jacket. The light color of the stone statue has been suggested that it may have come from a Barre, Vermont quarry. 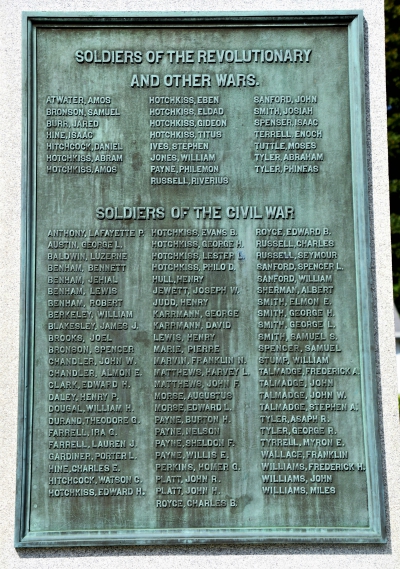 Soldiers Of The Revolutionary and Other Wars

Soldiers Of The Civil War