Conversations with Mama: You never know what she will say and more… #26

Conversations with Mama… and more ~ #26 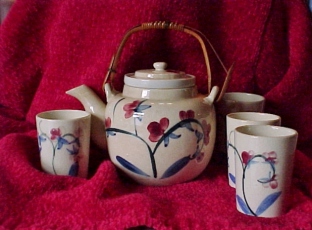 Grandmamma’s little rocker and tea pots from my Heirloom series…

Jan. 16, 2016: I told Mama tonight that it was Robert’s birthday (my cousins) today and she said… “Did I ever tell you about what his sister, Paulette said? At that time, they were living next door to us; she came over one day and asked me what I was doing, she was probably about five. I was dying some clothes outside, and I told her I’m dying. she just looked at me and said, “Can I watch, I never saw anybody die before. She liked to eat dirt, no one knew why, but if you didn’t watch her, she’d have a mouthful of it. The Dr. told them to buy some of the white dirt that was sold, cook it in the oven and let her eat it, until she stops craving it. You could buy white dirt in the grocery stores back then, not sure if you can still but it or not.”

Jan. 28, 2016: In talking with mama tonight she mentioned fried apples and … “My mama made the best fried apple pies from the apples on our trees. She used the same dough she made for biscuits, just rolled it out and let it rise with a cloth laid over, then she’d ball it up again and re-roll once more, it was then ready to use; it must be rolled out thin. She crinked the pies around the edges and fried them on the stove – boy were they good.”

Feb. 1, 2016: When I called tonight, somehow this came up… “ There was a tree up on our hill with a sapling growing up right between two big rocks. It was my favorite place to ride the pines – I’d shimmy up the tree and wrap my coat around me and the tree and get it rocking – almost touching one side of the ground and back over to the other side. It’s a miracle I never flew off and hit those rocks; Daddy just plowed in the field, never saying a word to me. Behind the barns was a tree we called the “lighting tree” – as it seemed to be petrified from being hit by lighting too many times.

I was always doing something, either jumping over big gullies or swinging on vines across deep ditches – it’s a wonder I never broke my neck. Leroy hunted with guns everyday but wouldn’t let me go, so I’d sneak and follow him. I’m lucky he never accidentally shot me – maybe he knew I was following! I also liked to follow him and the boys and write down everything they talked about. One night at supper, when daddy asked what was new, I proceeded to read their news of the day. It wasn’t very nice what they had said and I didn’t even know what it meant, but daddy wasn’t happy.

I didn’t like school very much and I sometimes skipped school. One day the truant officer came around and daddy ran him off, telling him he’d take care of it and to never come back around his farm again. The workers in the field laughed as the man jumped over the fence as he ran away from my daddy.”

Feb. 6, 2016: I asked mama about grandmamma’s teapots and did she drink tea? “My mother never drank tea, hot or cold. She always though tea tasted like Black Draught, which was some type of medicine back then. She bought tea as she always made sweet tea for Sunday dinner. Those teapots came from cousin Ulma’s store in Siloam. They were given away free when you bought certain products; I remember pulling it out of the flour sack and thought it was pretty.”

Feb. 7, 2016: When I called mama and told her I was knitting as we talked…. “You’re just like my mother, she always had something in her hands at night – she’d be either crocheting, sewing or piecing quilts. She could never just sit there and do nothing with her hands. I’d rather lay here in bed watching a movie – I’m content to lie here doing nothing.

Feb. 11, 2016: Mama began talking about clothes when I called… “I was a tomboy when I was little – I even wore overalls when I was young, never liked dresses. When it was really cold mama made me wear long johns under my clothes to school. I hated that. When we got to school, Willie Mae and I would cut the sleeves off the shirts underneath. One time I remember wanting a pair of white shoes – we were lucky to get one new pair of shoes a year, so I painted my old black ones, white – they looked pretty good until it rained.”

“I loved to sit in my father’s favorite rocking chair by the fire on cold nights in the cabin. Daddy always had a favorite chair. My mother’s brothers, Lewis and Roth Askew used to come visit us in the cabin every couple of weeks; they walked everywhere they went. Uncle Roth had lost one hand in an accident when he worked in the sawmill. If no one was home, when they came, they went in and let the window shade up to let daddy know, in the field, that they were there. They lived together in Powelton, which was below Sparta, and often spent nights with different brothers and sisters; Uncle Roth died at his sister Annie’s house. He told her the night before, that he was going to retire, he went to bed and when she went in to wake him the next morning, she found him dead.”

“I started school when we lived in the log cabin. I remember walking down the road to meet the bus – usually Kendrick Lewis was there waiting for me. He was a scrawny boy, and I often beat him up. I went to a big Easter egg hunt at his house one year and found the Golden Egg prize – I ran all the way home with it, him running behind me – crying. Mama took it away from me and put it up, I wanted to play with it, but she wanted to save it, guess she thought it pretty. It was a chicken glued on top of a box and inside were little chickens on straw. She sat it up in the parlor, never letting me touch it. I don’t know what happened to it later on, guess it just deteriorated.”

Feb.13, 2016: I called mama tonight after dark and when she wasn’t answering the phone, I was almost ready to call the police – as she doesn’t drive at night. Finally after trying for over an hour, she answered saying… “I knew it was you. I went out to Walmart to finish using up that card you sent at Christmas and I walked around and around looking at flower seeds and stuff for the yard. When I went to pay and saw it was dark, I was like “Oh no, Jeanne is surely to be calling.”

Feb 15, 2016: In talking about dreams tonight and how Steve has such strange dreams, mama said… “I dreamed the other night that your father went back into the Navy. He joined back up and never got remarried – I saw him clear as anything in that dream, and all dressed in his uniform. I don’t have crazy dreams, but I sometime dream a lot about your father. I did love him and would have still if he could have straightened himself out. He went to work everyday in his dingy uniform and worked in a trailer in Memphis on the base. At Warner Robins he worked on gyros and prisms; they were used in the planes to reflect back to the ground. His best friend in the Navy was a man he called Neese.

Boo was very mad at me tonight – he’s in the other room sulking now. He wanted to get under the covers and I tried to fix him a place to get under and when I covered him up, he wasn’t having any part of it and took off back to the living room and curled up on the floor. Go figure him out!!!

Feb. 21, 2016: I asked mama why there wasn’t a living room at the farm house, and… “The other room across the hallway was set up as a parlor when I was young. Mama had it all fixed up, but I never remember anyone ever sitting there. Whenever family came, they always sat in my parents room, which also had several chairs in it. I never had my own room – I slept in a bed in my parents room  and I never liked that. Leroy had his own room – he had the shed room.”

In asking mama about the little rocker…. “It was Ulma McKinley who gave mama that rocker, so I’m sure that the last cane was done by Ulma; she was an expert at caning. Mama often sat in that rocker, it was a perfect size for her; it was where she sat at night when she pieced quilts.”

It was raining here (Feb. 23, 2016) so I called mama… “It poured here last night. I love to hear it hit the tin I put outside my widow. I stopped last year and picked up a piece someone had thrown out from tearing off a tin roof. I wish now I had picked up another piece. The sound of the rain hitting the tin makes me feel like I’m back at the farm; I loved hearing the rain hit the tin roof on the farmhouse. I planted sunflower seeds today on the side between the house where Mr. Robert lived. I put seeds by each post, and I’ll fill it in with all kinds of short flowers in between.It’ll look really pretty if they all come  up.”

My blog is at: https://everyonehasafamilystorytotell.wordpress.com/
View all posts by Jeanne Bryan Insalaco →
This entry was posted in Conversations with Mama and more. Bookmark the permalink.

2 Responses to Conversations with Mama: You never know what she will say and more… #26