Anyone born in the South… was born drinking sweet tea from the get go! It’s a staple on every table, and the preferred drink of the South… comparable to the Italian jug of wine on the kitchen table of my husband’s grandparents! I never was served soda at our meals… and we never even called it that… whatever type of flavor soda you drank… it was Coke! Soda is the northern Yankee name I learned in moving to Connecticut.

At my first job, as a waitress at age 16… I soon learned it was also called “pop.” Who knew… and when I was asked what type of pop we had… I would answer, “we’re all out.”  Whatever I didn’t know… we were all out! That same night I had an older “yankee” couple  order tea… guess what I brought? Of course… a glass of sweet tea… and quickly received the look of… what is this? I soon learned what hot tea was…  and wondered why anyone wanted to drink that?

In attending a recent “Bryan” Labor Day picnic with cousins in Georgia …  I was amused in hearing the talk of… “hey, hope there’s plenty of sweet tea”… and, “who’s bringing the tea“… and then, in walked cousin Lynn saying… “I brought sweet tea“. Dam, I missed that photo opp of the many gallons of “sweet tea” I soon discovered sitting on the counter! Sweet Tea at a family picnic is taken very seriously in the South! “It’s a staple… and a must… and always Lots of ice!

It was funny listening to everyone ask “Where’s the Tea!”

On my last trip to Georgia I looked for the new boxes of Luzianne Sweet tea bags my son told me about… I bought 4 boxes, much to hubbys look of where are you going to pack those… our car was so packed! But believe me, when I’m determined to bring something home… it comes… somehow! I was also determined on our last trip to bring my grandmothers  vanity bench that always sat in front of her mirror… he had put me off the past couple trips, but this time, I stood strong… saying “make it fit!”

No drink was ever served at our dinner table except for mama’s pitcher of sweet tea… but, I remember our neighbor always having Coke served at their dinner table… they actually kept cases of Coke in the kitchen closet; I was so jealous and loved to eat dinner at their house. I don’t even remember milk being served at our table… just sweet tea. As we never had Coke in our house, I once slipped several bottle tops in my pocket because of a contest. I wanted bottle tops to try and win a prize… but mama made me march right back over there to return those bottle tops. LOL

Mama made many changes to her sweet tea over the years… the best sweet tea is made with just plain sugar… and always sweetened warm! Everyone knows you can’t sweeten cold tea… it just doesn’t work! The ratio to a gallon of tea is about 2 cups of sugar… overload I know, but if it isn’t sweet… it’s just not sweet tea! I’ve had some really super, super sweet tea… and it takes time getting used to, especially as I don’t even add sugar to my coffee anymore. Later in life when saccharin came onto the market, mama switched to using 1 cup of sugar and 1 or 2 saccharin tablets. Now you read how bad it was for you… I think I just threw away an old bottle of saccharin tablets I found on her shelf… it was so outdated… telling me it’s been a long, long time since mama made tea!

The first thing I look forward to when arriving in Georgia… is a cold glass of sweet tea… and I used to always count of mama having it waiting for me. She even kept an extra jar of brewed tea in the fridge… just waiting to be poured into a jug. You never want to run out of sweet tea! Hubby always laughs when I return home from Georgia… as one of the first things I do is drag out the tea bags to make a jug of sweet tea… but often now, I arrive home with a jug of tea I’ve brought from Georgia. After having a few glasses… I somehow forget about it and eventually it’s dumped… but I start craving it again as soon as I see the sign… “Welcome to Georgia.” I’m just not home unless I’m having sweet tea, boiled peanuts, catfish, hushpuppies, BBQ and Brunswick Stew!

This past year I’ve discovered a new “want” as soon as I hit the southern states… there’s a new fast food place called Cook Out… and they make the best banana milkshakes. On the last trip through I saw “hushpuppies” on the menu and just had to try… they were awesome! Good thing I don’t live near one of them… I only get one treat coming in… and one heading for home! I first find them just over the line in North Carolina… and now they’re also in Georgia… I’m hoping one opens in mama’s home town soon!

My mother always said of herself… “I was a country girl… Mama making me chocolate milk – and probably sent to school for me in a mason jar. We mostly drank milk at all our meals, as she hated sweet tea and only made it on Sunday or when company came. She said the taste of it reminded her of medicine… but she made the best sweet tea!”

In asking mom about grandmamma’s teapots… and did she drink tea? “My mother never drank tea, hot or cold. She always thought tea tasted like Black Draught, which was some type of medicine way back then. She did buy tea as she made sweet tea for Sunday dinners. Those teapots you have came from cousin Ulma McKinley’s store in Siloam… they were given away free when you bought certain products; I remember pulling them out of the flour sack and thought they were so pretty. Mama was always more interested in the fabric print on the sack… as she saved them to use in sewing. My underwear was always made from flour sacks!”

I saw on Facebook  one morning that is was snowing in Georgia, and when I called mama, and asked… “It might have snowed, but I didn’t even bother to look out. Then the topic changed to coffee… “we bought our sugar and coffee, as daddy had to have his coffee. We also bought tea, but we only had sweet tea on Sundays… we were “uptown” on Sunday… but daddy only drank coffee. The only brand of tea we bought was Luzianne… and only loose tea leaves! There was a man who came and sold it to cousin Ulma for her general store in town… and I dated him once; he took me to the fair in Greensboro. We often laughed and called him the “Luzianne Man.” Sometimes he even parked his truck behind the store and sleep there.”

While visiting with Mama recently at the hospital, I mentioned meat boycotts after reading about them on a blog… mama said, “I didn’t really cook much back then when that was happening… as I waitressed at The Nathanael Greene Restaurant in Greensboro. Mr. Caldwell, the owner, always had the kitchen fix me a plate to take home to my father every night… that solved my cooking dilemma; I was living with daddy on the farm. Half the time he hardly ate much of it, he never had a big appetite like me. I thought Mama was going home today, but I arrived to find her with a 102 temp from overnight, but really no fever now. She had eaten no breakfast, and ate very little lunch of the mashed potatoes, meatloaf and turnip greens. She actually turned her nose up, and picked at it like a bird. One thing she did enjoy was the sweet tea… having two glasses. “I’m so stuffed now, that sweet tea sure tasted good.” Later, I brought her a chocolate Ensure… and she downed it!

“I’d hate for someone to depend on me to cook for them. I’m just never hungry anymore. The only thing I’d like to do again… would be to put my feet under my mother’s table… just one more time! I didn’t know I had it so good back then… it was just food to me. Mama cooked the best fried chicken, vegetables from the garden, and how I’d love one of her home-made biscuits and a glass of sweet tea.”

“Mama and Daddy never had an icebox or refrigerator until after you were born. Anything that needed to be kept cold was put under the sawdust pile with a block of ice. Daddy usually kept the milk and cream in the well… you had to pull up the bucket to get the milk or cream bottle when  needed.”

“Daddy bought ice on Sunday, as we had no refrigerator… he’d take the ice block, put it in a croaker sack and bury it under the sawdust pile. Daddy kept the big sawdust pile away from the house as he always said that sometimes they burn hot at the center and could start a fire. He warned me to never play in a sawdust pilem as I could fall in and smother or be burned.” (It’s unbelievable to hear how sawdust kept the ice block from melting and how they can be hot in the center.) 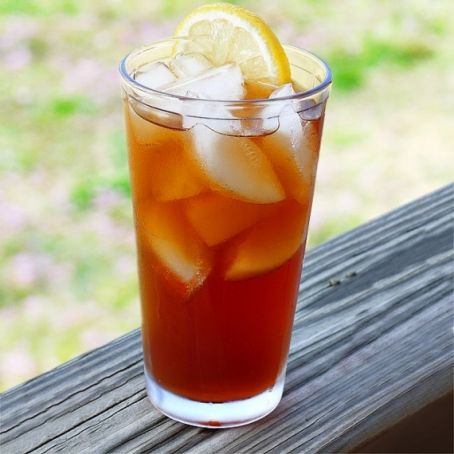 “I made myself a big pitcher of sweet iced tea today, so you better run in the kitchen and make yourself a glass.”

I sure miss those days of arriving at Mama’s to find sweet tea in the fridge and supper waiting in the fridge… roast beef, cooked to death green beans (post coming soon), biscuits waiting to be cooked and her favorite of yellow squash… and if she decided on fried chicken, then I knew there will be a jar of pickled peaches on the table!

My blog is at: https://everyonehasafamilystorytotell.wordpress.com/
View all posts by Jeanne Bryan Insalaco →
This entry was posted in Daily Writings and funnies..., Family Recipes and Memories, Family Stories and tagged southern food memories, sweet tea. Bookmark the permalink.