Savin Rock… Now and Then: The Sea View Hotel

Through the re-creation idea of James Holt, in placing these structures of where they once stood long ago in West Haven’s Savin Rock… to now… in today’s time and place. (credit also to Marc Friedland in the sharing of his vast photograph collection and knowledge)

I hope to breathe life in these photographs through story form… of where these structures once stood at Savin Rock, sometimes known as “Connecticut’s Coney Island.” Savin Rock is a place I heard stories of when I first came to West Haven… a place my husband was able to somewhat enjoy throughout his boyhood, but not in all its glory of what it once had been.

Savin Rock is a place that holds dear memories for many… of times once enjoyed and not forgotten! 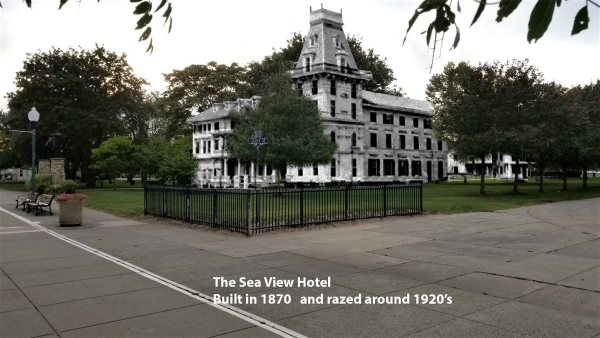 The Sea View Hotel – Now & Then photo by James Holt

Savin Rock Park was built in the late 19th century in a town known as West Haven and Savin Rock is often referred to as “Connecticut’s Coney Island.” It is a well-remembered park with many citizens still holding onto their memories! Colonel George Kelsey, a Civil War Veteran, is credited primarily for this development… building it one piece at a time! In looking at the photo above… look to the left of the building and you’ll see stone pillars with an arch which says “Old Grove Park”.

The Sea View Hotel picture above was originally situated in the corner of the grove… just to the left of where the stone pillars are now. It sat facing the water, with Beach St. running between it and the waters edge; now the road stops at the corner and no longer continues along the beach edge. James’ visualization of placing the hotel where it once sat… really  puts it more in perspective into us knowing where it actually sat… over a hundred years ago.

George Ranney Kelsey was born on April 25, 1817, to parents, Zebulon Stocking Kelsey and Sally Edwards, in upper Middletown… now Cromwell, Ct… one of nine children in this family. In 1855, Kelsey came to West Haven from Middletown and became affiliated with the West Haven Buckle Company.

In 1885, he reorganized The American Buckle Company… and by 1867, being the entrepreneur he was, he spent the postwar years buying the controlling interest in the West Haven Horsecar Line which ran to Savin Rock… he knew this would help build the town of West Haven and his ideas. In 1870 he erected the Sea View Hotel, along with the famous bandstand, the fountain in “The Park” and the Observatory atop Savin Rock Proper… where he installed telescopes so his patrons could look out over the water. This was the beginning of Savin Rock Park as an amusement center… attracting thousands of fun-seekers; it had a profound effect on the economy of West Haven… but like all things… it slowly disappeared through the years. But just strike up a conversation with anyone old enough to remember Savin Rock… and the memories come flowing out… hopefully it will never be forgotten!

The Seaview Hotel, located at 392 Beach St., was located on Long Island Sound in the Savin Rock section of West Haven. 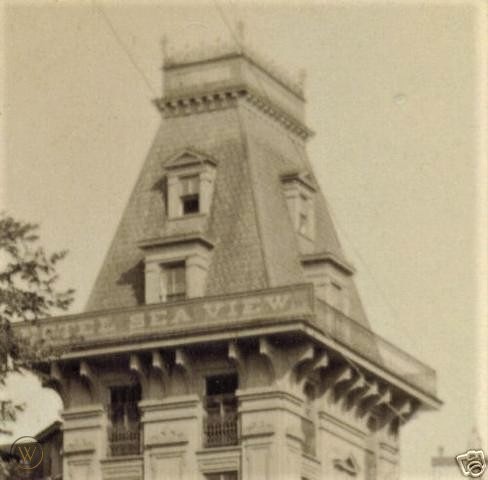 What workmanship… love the name on the top!

Kelsey built the Sea View Hotel in 1870 as a business, but also to boost the economy of his horsecar adventure. His vision was build a Victorian mansion by the sea, capable of housing over 150 wealthy guests… and that’s exactly what he did! The hotel was built in different sections… the first building consisted of only one wing, which faced Beach Street; years later he added the Grove Street wing… later adding a tower. Kelsey surrounded the hotel with extravagant lawns and gardens of roses for his guests to stroll through… with secret hide-a-ways for his younger patrons. He also built spacious verandas to surround the hotel for his guests to sit and enjoy the water and countryside… which was all that there was, at that time.

He later built a park alongside the hotel and encouraged local businessmen to use his property in building amusements for his guests. Soon there was a small zoo, museum, and even later, a dance hall on the property. As the amusements began to grow… many locals opened up numerous small food and souvenir stands.

Kelsey built the famous Kelsey pier at the foot of Summer Street in 1870, extending it 1,500 feet out into the harbor. Being the entrepreneur he was, he even added a Victorian ice cream parlor off to one side of the pier… how ingenious! When you stepped off the ferry on a hot summer day… who wouldn’t want to buy an ice cream! Kelsey was always thinking of how to make the next buck! This pier was capable of offering ferry service, regardless of tide schedules… meaning the patrons never had to wait for high tide to arrive at Savin Rock Park. Kelsey was bringing patrons to make money for the park, as well as money for West Haven.

It would be awesome to have that long pier back today… and most definitely serving up ice cream cones!

The Sea View proved to be prosperous for almost twenty years or more… quickly becoming the center attraction for the elite citizens of New Haven and surrounding towns. Even though it was built in West Haven, its patrons came from New Haven or elsewhere… no one living locally was going to pay for high-priced rooms to spend time by their own shore. Soon, it proved to be so popular with elites, that it was almost impossible to secure a reservation unless you made that reservation several days to weeks in advance. The wealthy quickly made this the most popular summer retreat… often reserving suites seasons in advance… to secure their summer stay. It was also considered somewhat of a prominence to be registered at the Sea View Hotel.

Through the years, the Sea View Hotel changed proprietors several times, but the land on which it stood, always remained in the hands of the Kelsey and Cameron families; George Cameron, the last proprietor, managed the hotel until his death. Trustees of his estate took charge in 1922 and persuaded the judge of the Probate Court to order the still “structurally” sound hotel to be razed… as they finalized the Cameron estate. It seems that they had other ideas, and not interested in running hotel any longer, even though it had been profitable; most likely, times were changing and the once affluent, no longer were making this their summer residence. It could have been because the park was growing into a different direction with attractions… and attracting a different clientele, which wasn’t the same as who once came to stroll the gardens at the Sea View.

Savin Rock still continued on for almost another forty years… before finally succumbing to the push in 1963 to begin removing Savin Rock amusements… which they called cleaning up the area. The city received $3 million dollars for this urban renewal project… and today, many wish it was all back.

Want to read more, click…. Savin Rock… Now and Then

My blog is at: https://everyonehasafamilystorytotell.wordpress.com/
View all posts by Jeanne Bryan Insalaco →
This entry was posted in Daily Writings and funnies..., Savin Rock and tagged Savin Rock, Sea View Hotel, West Haven CT. Bookmark the permalink.

4 Responses to Savin Rock… Now and Then: The Sea View Hotel