I’m back in 2020 for my fifth year of participating in the yearly April A to Z challenge… and as usual I racked my brain scribbling ideas on paper since the end of last April. It wasn’t until January, that the light bulb finally went off in scrolling through the 85+ of unfinished blog posts in my draft folder. Bingo… there was my A to Z topic…

Family Stories as told to me… mostly by my husband!

From the moment I married into this Italian family… I fell in love with their stories… their memories… and the family. My husband grew up in West Haven, Connecticut… where there was so much to enjoy as a young boy… especially a place known as Savin Rock… although long gone now. It somewhat had resembled Coney Island… but was even larger when his parents, aunts and uncles grew up. They had stories… and I was always an eager listener whenever they told those stories…  remembering, and scribbling down to preserve, just as I did with the family recipes that had once only been in their heads. 2020 has became the year I’m telling many of those stories… along with my husband’s memories to preserve for the generations to come. Many of those who told me their stories, are no longer with us… and I hope to keep their memory alive in these stories… as they are now my family also… and I love them all!

My previous years of A to Z Challenges are:

Come sit a spell and enjoy!

In searching for one photograph… I came across my in-laws honeymoon photos… and they called out to me… calling to tell their story! Out came my Nancy Drew hat! I had several small photographs… all same size… and seemed to have been taken in all the same area. And if I’m remembering correctly… she told that they were taken on their honeymoon… why didn’t I ask more questions! 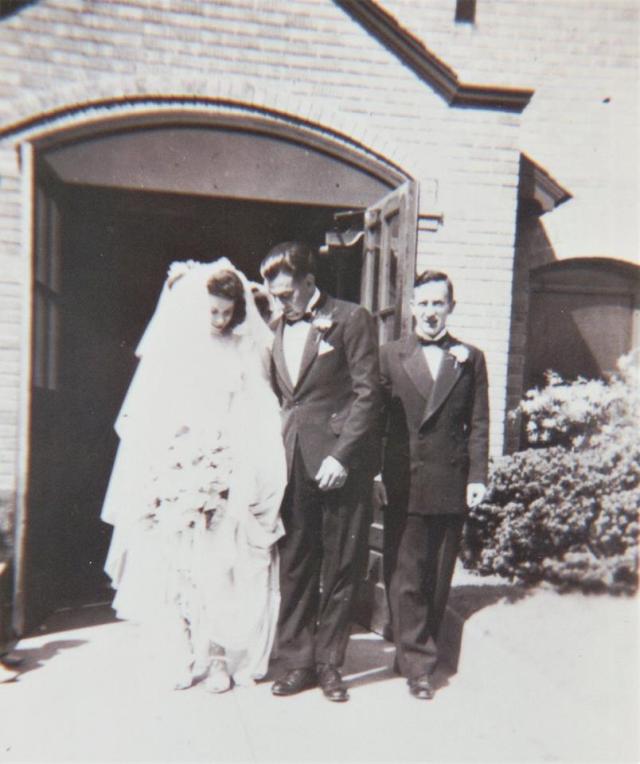 Cecelia (Cambino) and Stephen Insalaco married on June 5, 1947 at St. Paul’s Church in West Haven, Connecticut. And like all weddings… a reception followed… a reception at the Steven Heights Club in West Haven. Eddie Voss, a friend of the family owned it… and where many of the family held their parties and receptions. June 5th was on a Thursday… why that day… but I found several marriages in the family taking place on a Thursday! 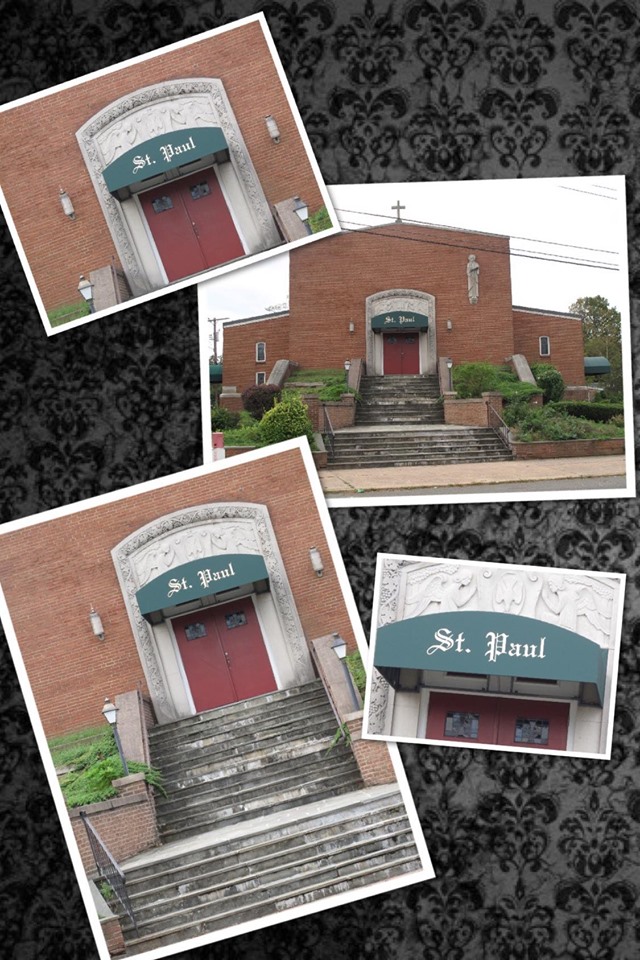 St. Paul’s Church in West Haven where CeCelia and Steve Insalaco were married

What was happening in 1947 besides the wedding of Steve & Cecelia Insalaco?

Harry S. Truman (1945-1953) was President… Pakistan and India gained their independence from Great Britain (Who knew that?)… Pan American Airlines offered a round-the-world-ticket, the first commercial airline to do so… Congress proposes 2-term limitations on the presidency (was it not always that way?)… Baseball suspends Brooklyn Dodger Leo Durocher for 1 year… Babe Ruth Day celebrated at Yankee Stadium & throughout the U.S… Engagement of Britain’s Princess Elizabeth and Lieutenant Philip Mountbatten…  US Air Force created as a separate military service by the passing of the National Security Act… New York Yankees catcher Yogi Berra hits the first pinch-hit home run in Baseball World Series history off Ralph Branca in the 7th inning of a 9-8 loss to the Brooklyn Dodgers in Game 3… First telephone conversation between a moving car & a plane… “You Bet Your Life” with Groucho Marx premiered on ABC radio…  1st “Howdy Doody Show” (Puppet Playhouse), telecast on NBC.

Just a few things happening in 1947 when they married! 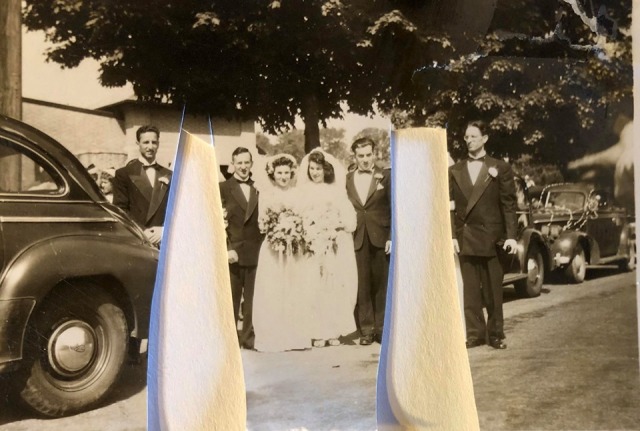 Why are people compelled to cut others out of photos… this was a great photo at one time… I’m thinking the car in the rear might have been the honeymoon get-away car! 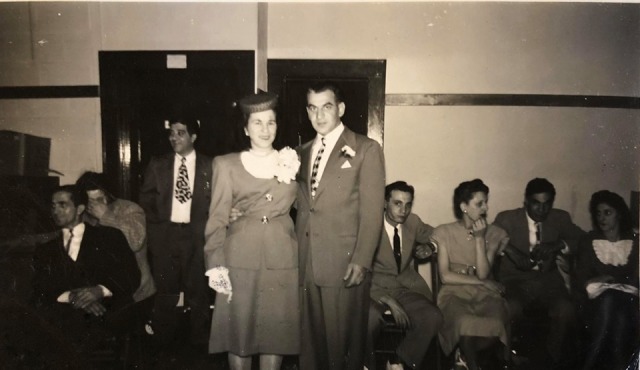 While I do remember hearing that they honeymooned in the Green Mountains of Vermont… I remember no more – no less! And now I have questions… but no one to answer them!

In 1947, pretty much if you could afford a honeymoon… it was by car or train… no one flew at that time. My father-in-law did have a car… so I’m sure they drove, and as I-91 and I-95 wasn’t in place yet… which route did they take? Rt. 1 was the main road that took you wherever you went… but as they went to Vermont, I’m assuming they took the also famous Rt. 7 which was on the most western side of the state and pretty much went straight up through Massachusetts into the Green Mountain National Forest area… it sounds like the most logical route.

Popular honeymoon destinations in this area, at that time, would have been the Pocono Mountains and Niagara Falls… so why The Green Mountains in Vermont? Did they really have a destination planned or just hit the highway!

(The announcement clinches as to their destination to Vermont… and by car! If only it had given their hotel name!)

We have driven through the Green Mountain area in Vermont… beautiful country roads… but how country was it in 1947? Vermont is home to more than 100 19th-century covered wooden bridges, and a major producer of maple syrup. We went one year in March for their opening of maple sugaring season… but as they married in June, I know they didn’t see any of that.

In the 40’s and 50’s, Route 7 was the most popular route for travel to Vermont… with a nickname of “The Green Mountain State” Rt. 7 would have been lined with mom and pop motels with iconic neon lights and names. Maybe my in-laws even ate at a diner, like the Blue Benn in Bennington, Vt. on Rt. 7… a very iconic vintage diner; we were lucky to get a morning table for breakfast on our last trip… with a working jukebox at our table! The Vermont Country Stores opened in 1946… wonder if they discovered one in their travels? 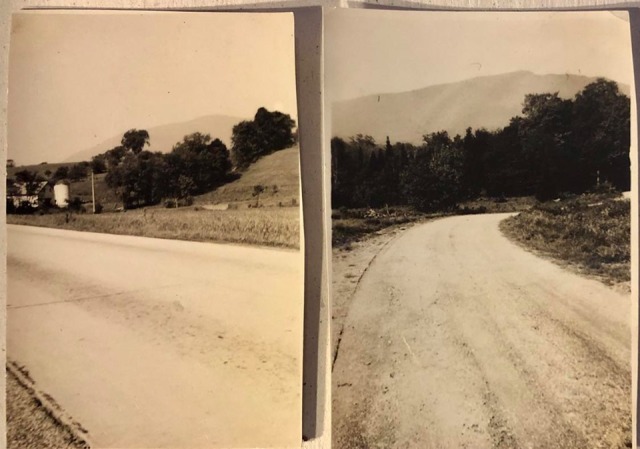 Seems they stopped to take several “road” pics along the way… and definitely doesn’t look like the best of roads to travel! Steve remembers his parents as never having a camera… so who loaned them the camera? It was mostly the family in Shelton who had cameras… and if it was Uncle Tony, the best man… Steve’s sure that if they borrowed it… it was rented! 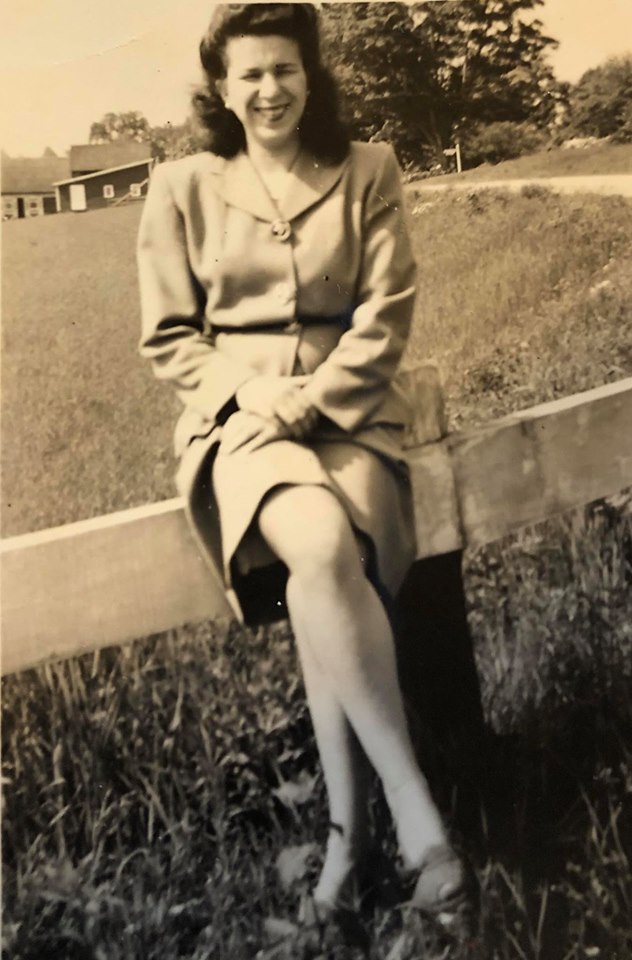 Did they stop along the road for photos… young and silly… enjoying their honeymoon! 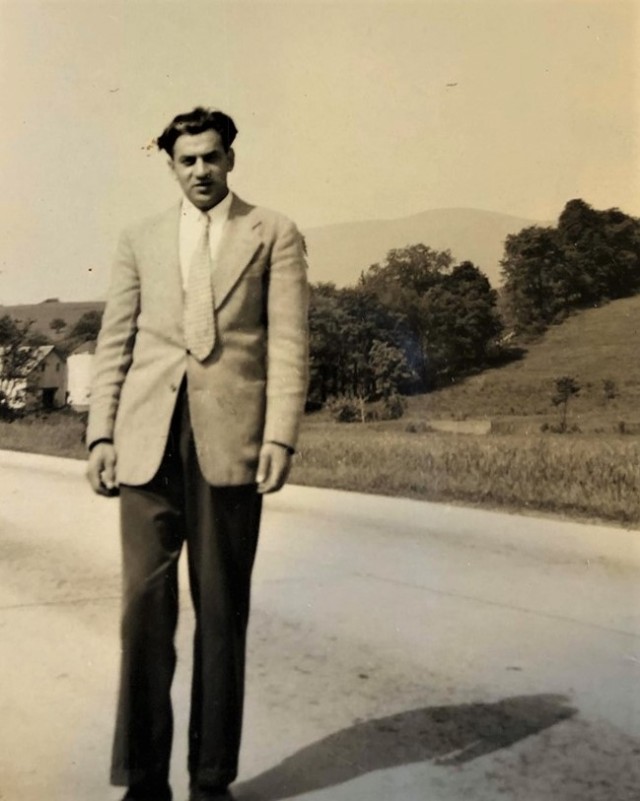 I’m surprised Dad posed for this photo… guess  Celia was shooting for the mountains in the background, but she should have combed his hair. What I found the most interesting in this photo, was that he was driving in a suit and tie… Why?

As they possibly drove along Rt. 7… did they pass by the iconic Lake Champlain on Rt. 7, which would have you heading toward the border of Canada… how close did they go? When gas was needed… dad didn’t even have to step out of his car to pump during those days. I miss the old gas stations… you just pulled in and out came an attendant to pump your gas… wash your windows… and even check your oil… remember the bell that sounded as the wheels ran over the hose!

The Green Mountain National Forest,  was established in  1932… and home to a variety of wildlife, including beaver, moose, coyote, black bear, white-tailed deer, wild turkey, and ruffed grouse! While they never mentioned seeing any… I’m sure they encountered wildlife at some point in their travels. 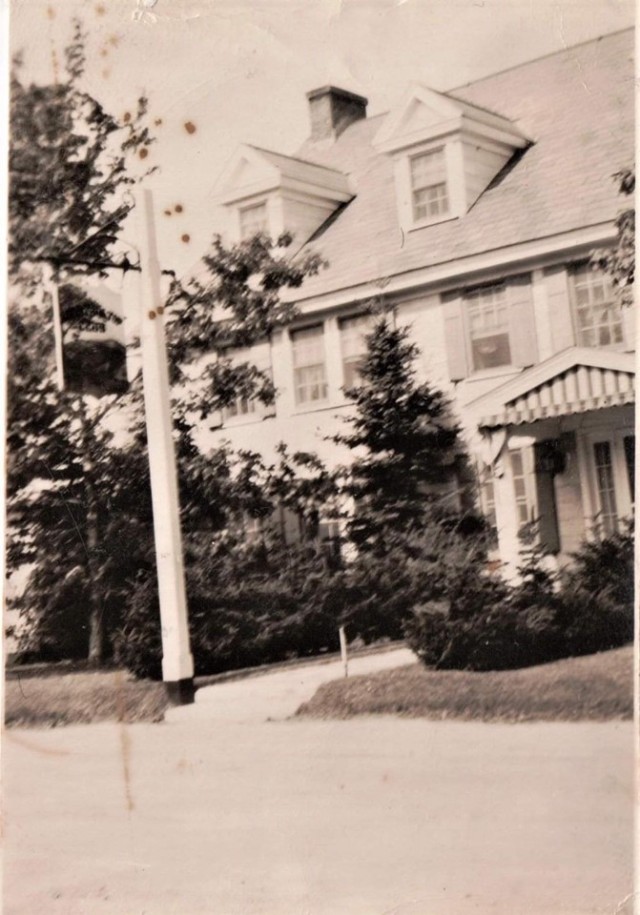 I always thought this photograph possibly showed the Bed & Breakfast Inn where Celia and Steve spent their honeymoon. The pole in front with plaque is not quite readable in the photo, but seems to be what you’d see out front of an Inn…  looks like mountains on the sign with a name above. I did a Google image search on the photograph, but came up empty… well, I tried! When I posted this photo in our family group I wrote where I’d seen the word “club” but not sure I’m seeing that now… if it was only clearer! 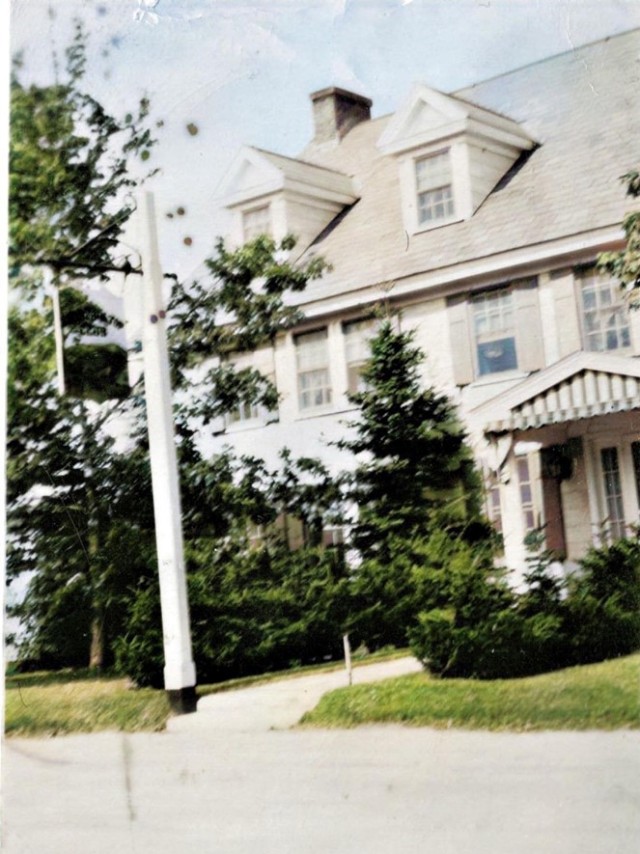 I colorized the Inn photograph… but still of no help!

Vermont in the late 1940’s was covered with bed and breakfasts for honeymoon couples… and they all had chaise lounges… and look what’s in many of their photos… the famous honeymoon chaise lounges! Seems like there was nothing else to do there, but relax in those chaises! 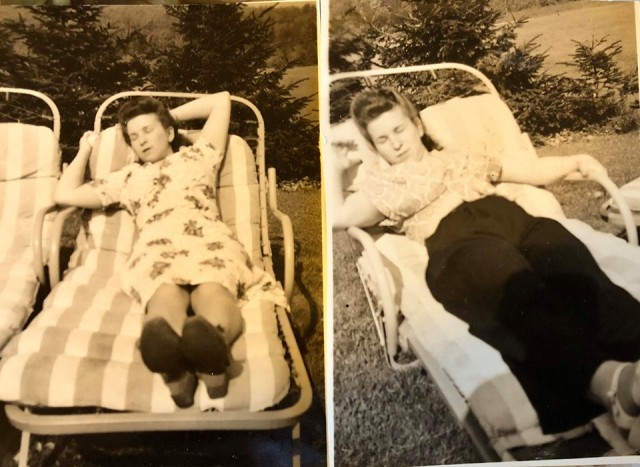 Seems there was a lot of relaxing on this honeymoon! 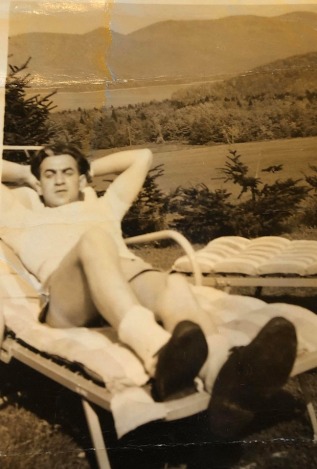 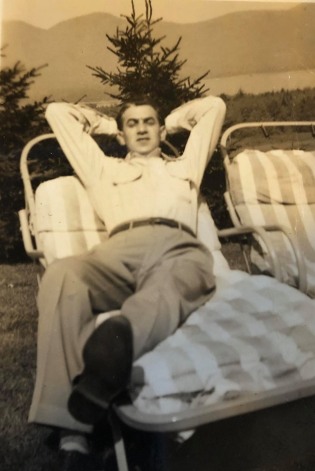 Dad takes his turn in relaxing… well at least the tie came off! 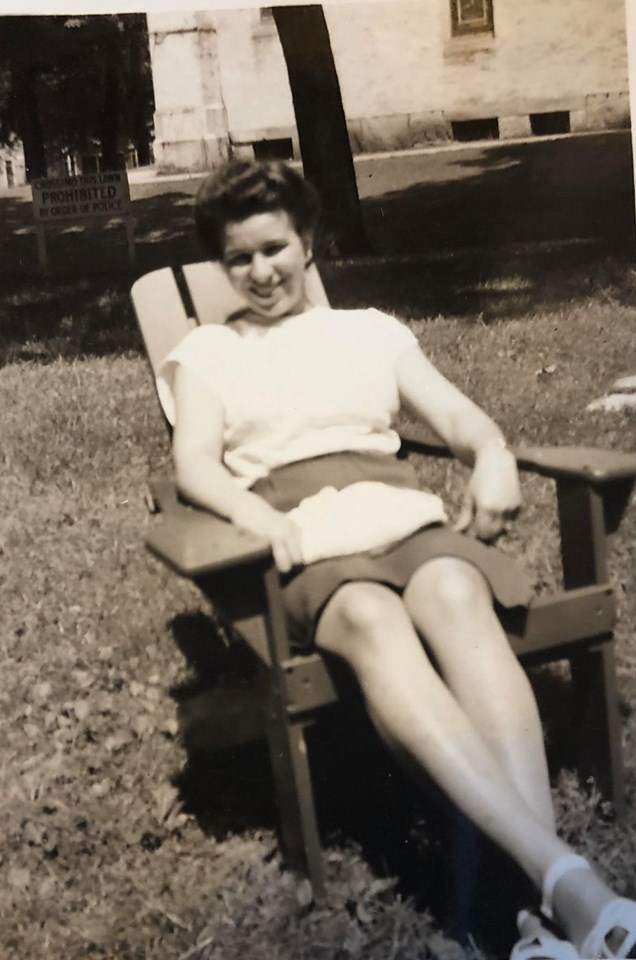 And look… they even found adirondack chairs… the sign behind Celia puzzles me though, as it says… “crossing this lawn Prohibited by order of the Police.” Are they outside a jail… Canadian border? 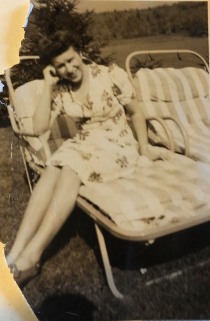 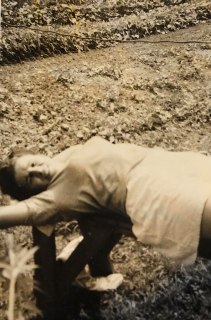 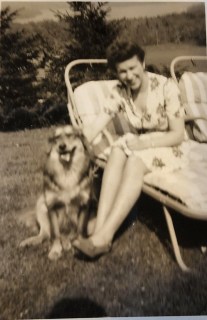 Celia seemed to even have found a friend while lounging… and she certainly seemed to enjoy her pin-up posing… even in front of a garden! 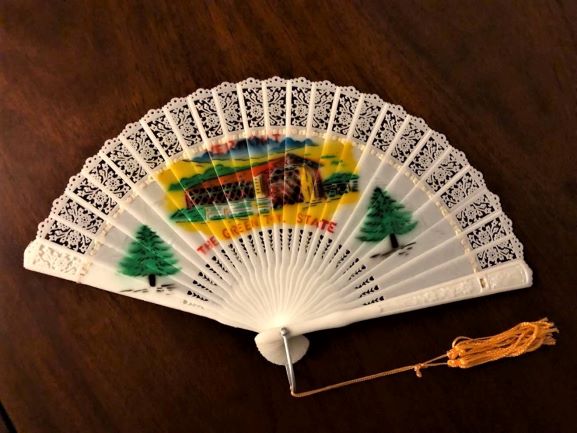 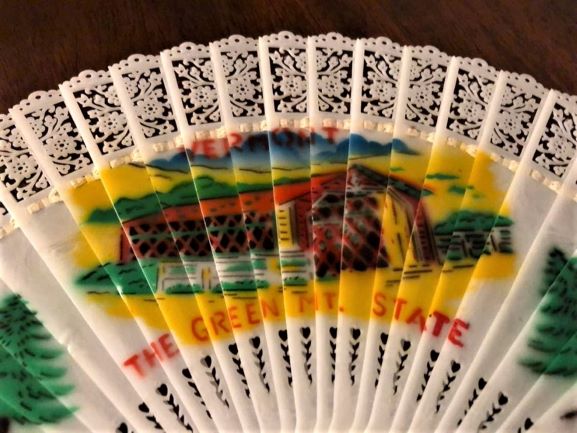 There are many famous wooden bridges in Vermont… possibly they crossed this one!

Even though I have their honeymoon photos… with all the many poses on those chaise lounges… standing by the roads… sitting on a fence rail… and her souvenir fan… it will always be a mystery as where they actually went in Vermont on their honeymoon… even with Nancy Drew’s help!

My blog is at: https://everyonehasafamilystorytotell.wordpress.com/
View all posts by Jeanne Bryan Insalaco →
This entry was posted in 2020: April A to Z: Family Stories, Daily Writings and funnies..., Family Stories, Husbands Family Stories: and tagged 2020 A to Z April Challenge, Adirondack chairs, Chaise Lounges, Green Mountains, Honeymoon, Vermont. Bookmark the permalink.