I’m back in 2020 for my fifth year of participating in the yearly April A to Z challenge… and as usual I racked my brain scribbling ideas on paper since the end of last April. It wasn’t until January, that the light bulb finally went off in scrolling through the 85+ of unfinished blog posts in my draft folder. Bingo… there was my A to Z topic…

Family Stories as told to me… mostly by my husband!

From the moment I married into this Italian family… I fell in love with their stories… their memories… and the family. My husband grew up in West Haven, Connecticut… where there was so much to enjoy as a young boy… especially a place known as Savin Rock… although long gone now. It somewhat had once resembled Coney Island… and even larger when his parents, aunts and uncles grew up. They had stories… and I was always an eager listener whenever they told those stories…  remembering, and scribbling down to preserve, just as I did with the family recipes that had once only been in their heads. 2020 has became the year I’m telling many of those stories… along with my husband’s memories to preserve for the generations to come. Many of those who told me their stories, are no longer with us… and I hope to keep their memory alive in these stories… as they are now my family also… and I love them all!

My previous years of A to Z Challenges are:

Come sit a spell and enjoy!

The name “Belle Dock”peaked my interest… as I remembered seeing it written as a workplace for Steve’s great-grandfather, Giovanni (John) DeTulio… so off I went in search of…

My first knowledge of Belle Dock was in discovering it on the WWI Draft Registration of Giovanni (John) DeTulio in 1918… his occupation was listed as “dock hand” at NHSC. I hadn’t heard of this specific dock before, but assumed it was one of the docks in the New Haven Harbor… which was a busy seaport in the 1800’s.

I was first confused as to the name of the nearest relative… as it looked to read Cecilia DeTullio… and to my knowledge at this time… there was no Cecilia DeTullio. But after studying it more… and knowing that he arrived here with his wife, Guila (Julia)… I chalked it up to that whoever wrote this was trying to write what he said… and he probably was pronouncing her name in a more Italian dialect; the other clue being…the address of the nearest relative was his home address… Nancy Drew strikes again! 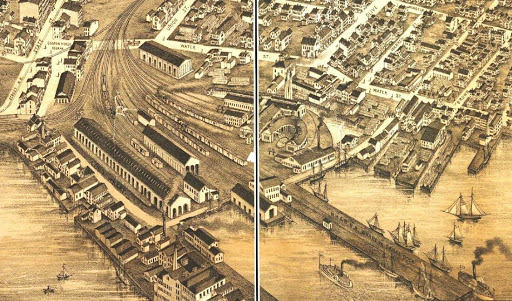 Belle Dock in the New Haven harbor was busy with commerce and travel… later that very area became the train rail-yard. 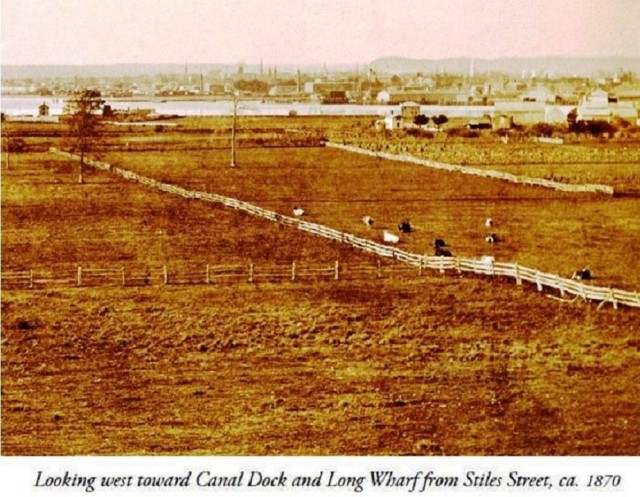 Hard to imagine fields of cows alongside Long Wharf… but circa 1870, farms and pastures ran along the shore. 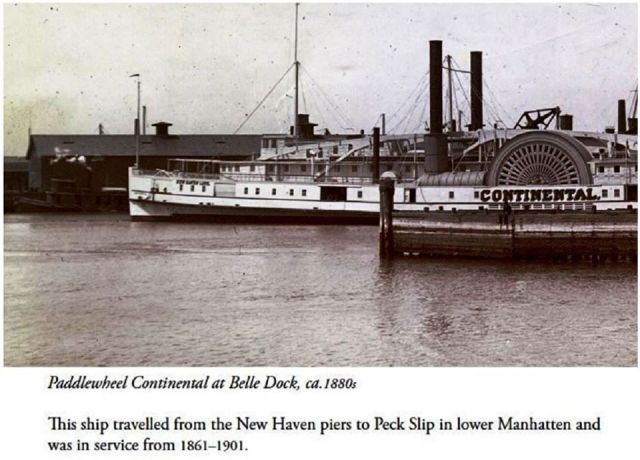 Belle Dock was located at the westerly approach to where Tomlinson Bridge is today… just under the new I-95 bridge. The steamboat wharf, better known as Belle Dock… was so named for the popular steamboat “Belle” which often docked there in the early 1800’s… decades before the railroad lines were built. The railroad bought a controlling interest in the nearby toll-bridge to gain the property if ever needed… and later also acquired the Belle Dock yard-area. The Hartford & New Haven Railroad built a large freight depot there, along with an engine house, passenger facility, and a dock, in order  to connect with the boats to New York. At this time (1844), and for the next decade, this rail line was the only way to connect from Springfield, Massachusetts, bringing traffic to and from Belle Dock. 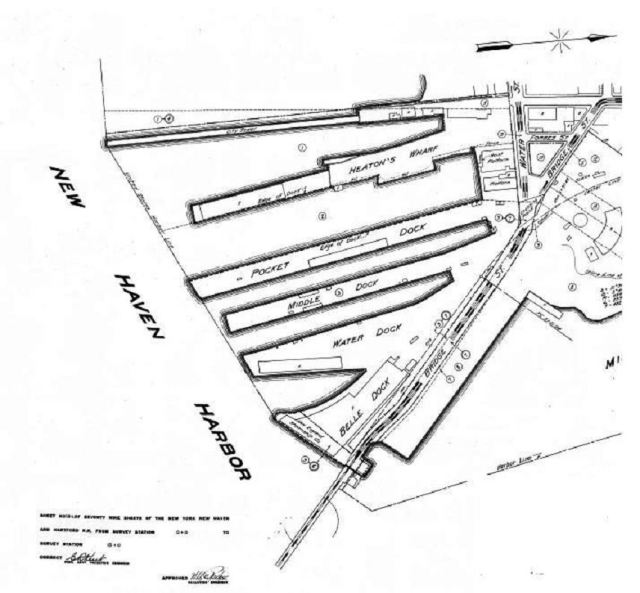 Belle Dock… one of many docks in New Haven harbor! 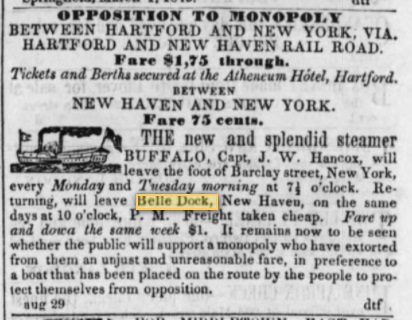 For 75-cents… you could spend the day in New York!

In reading through the census, John DeTullio seemed to move from job to job… maybe jobs didn’t last long in those days, but he always worked close to home… and Belle Dock was close to home on Warren St.