I’ve crafted ever since I was small… my mother tells me I could be content all day with only a shoebox full of paper and a pair of scissors… who knows what I made! I do remember making potholders with those well-known looms and stretchy yarns, and my grandchildren enjoy making them today… some things don’t change.

When my children were small, and I was a stay-at-home mom I began more serious crafting… even selling at summer craft fairs. What started me was an article in Woman’s Day magazine that showed Christmas felt ornaments… and I so wanted to make them! Once I began, they quickly snowballed into me making them by the dozen…  as everyone wanted to buy; I often worked late in the night in sewing them. Besides the hand-stitched ornaments, I also sewed applique wall hangings, dolls, wood painted items, and several crocheted items. All my felt ornaments were hand-sewn… no gluing involved as I’ve never liked to glue any of my handmade items. Even today, I’ll still grab my needle and thread to sew, rather than taking the easy way out of gluing. My love of sewing felt Christmas ornaments continue today and I’ll write on that in a future “tradition” prompt. 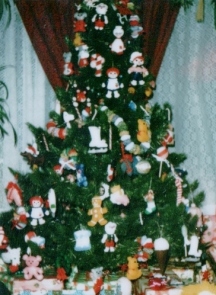 A few of my felt crafted ornaments over the years!

If “crafts” are in your DNA… then I credit my grandmother, Ola (Askew) McKinley in passing that craft gene to me. She was a true artist in her quilting… as that was her love. She couldn’t just sit, as mama often says… she always had her piece basket closeby. Evenings, after all chores were done, she sat and pieced quilts… and all hand sewing with needle and thread… and only by oil lamps. Quilting is something I always wanted to do, and while I made a few quilted items on a smaller scale… I never tackled large quilts like she made. Mama remembers seeing stacks of quilts sitting in the back bedroom…. but often it was the more worn ones on the bed at night… as grandmama didn’t want to use her new ones. While I have a couple of them… what happened to them all? I don’t know how many crocheted bedspreads she might have made, but I do have the pineapple design spread she made. This one must have taken many evenings to finish as it was crocheted with fine cotton thread, not yarn like we often use today. It can be seen over HERE. 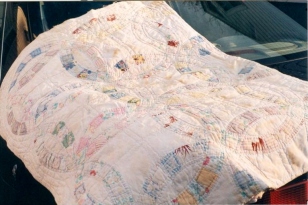 Two quilts I have of my grandmothers… the “wedding ring” quilt is one of two she made for her children when they married, and the “flower garden” quilt was always one of her favorites to sew. If only those quilts could talk… the tales they’d tell!

My grandmother crafted only by sight and the handling of the item she wanted to sew or crochet. She couldn’t follow any written pattern if there was even one in those times… she only had to look at a quilt or a crocheted doily… then go home and recreate it; that’s a true crafter! While I have recreated some items from only seeing it, either in person or online… it’s a timely process. 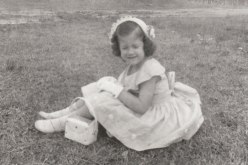 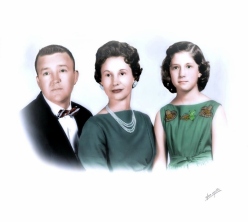 My mother in dresses she sewed for herself and the many dresses she made for me through the years. One of my favorites has always been the family photo of the one she embroidered the Mexican hats on… if only it had been saved!

My mother was a crafter in different ways… while she didn’t sew quilts, never having the “want” to… she did have the want to sew clothes… even sewing her own clothes, and making her own patterns. She continued to always make her clothes and even mine… until as a pre-teen when I begged for “store-bought” clothes. Even though she no longer sewed for me, it never stopped her in sewing for herself and still designing clothes how she wanted them. When we lived in Perry, near the Air Base, she admired the jumpsuits the Air Force guys wore, but there were no patterns for jumpsuits for women; that didn’t stop her! It didn’t take long, before she had twisted two patterns into one and she soon was wearing her own designed jumpsuits… and often asked where she’d bought them. Today she says… “I should have patented them as later patterns appeared for them.” 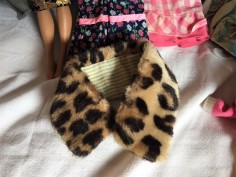 A few Barbie items… mama sewed the two skirts and the leopard stole!

As a young girl in Barbie phase, mama sewed for her also… early mornings my friends and I would take Barbie to visit her seamstress and ask for skirts or dresses, and then return later to pick up Barbies new clothes. Inside my Barbie case today are still a few items that mama actually sewed.

My crafting today is mostly knitting, and the five granddaughters keep me busy. Although now that three of my girls live in Florida, they don’t seem to need all the hats and mittens that’s needed in CT. Funny how most of my knitting is always for others, as I very seldom knit anything for myself. 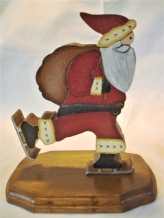 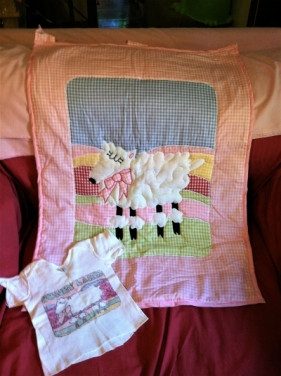 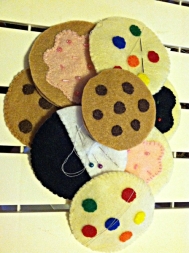 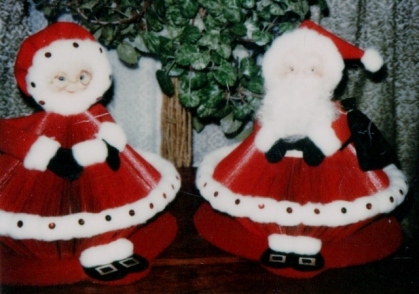 Many of my crafts have been blogged over the years… links posted at the end of article. While all my crafts were mostly made at home, my wooden craft painted items were created during my classes. Once a week, I’d pack up my two painting totes and off to class I’d go. In as much as I’ve never been a fan of taking classes… for some reason, which escapes me at the moment, I took wood painting classes.

If you asked my husband about my crafts… he’d quickly say “they are all over the house!” And often they are…  I can’t be separated too far from them. I’ll never forget the time it took me over a year to find my “knitting bag” of needles… and finally hubby discovered them in a basket that “he” had moved to the back porch. Now, I keep them closeby! Nothing worse than having to spend days and weeks looking for your needles!

I went through many crafting phases over the years… from sewing dolls, wall hangings, painting on wood, even clothes for my daughter, but today when asked to remake my famous Raggedy Ann dolls again… I cringe at the thought of cutting, pinning and sewing! The last time I made Raggedy Ann was several Christmases ago, when I sewed them for my daughter in law! 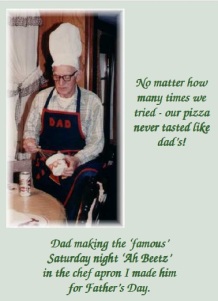 I made both my father and father in law appliqued aprons for “father’s day”. I picked the grilling guy for daddy as he enjoyed cooking on the grill and my father in law was well known for his pizza making!

When I married, it was my mother in law who taught me how to crochet and later knit. Teaching me the basic stitches… and pushing me to read directions to further my learning. My mother did crochet, as I remember her making those famous 60’s toilet roll cover dolls and the poodle “bottle covers”, but she made them like her mother would have… by “not” reading any directions. Me… I’d rather have a written pattern…cutting out the trial and error, as that so frustrates me… and wastes too much time! I often hear today from others how they can’t read or follow a pattern, but for the most part, I don’t have a problem in following patterns, but there are times! Luckily we have You-Tube today to help out in those times!