As Halloween approaches this year, it brings more than goblins, ghouls, and candy! It brings a count of 49 years back to the night I met hubby at a Halloween party… I was dressed as a fairy princess in a not-so-old prom dress, and he came dressed in his Air Force work duds… wasn’t too hard for him! Seven months later we were married! No tricks for us… only treats in the past forty-nine years of wedded bliss!

Two of my ghouls this year… McKinley as an arch angel and Grace as a corpse bride! I can tell she’s going to be running through those haunted houses soon! Ever see an angel wearing hot pink boots… well it was a little rainy and wet here on Halloween night… Gracie also has pink boots on! Those girls love their boots!

My first Halloween photo… the twins, Ana and Nina were ten months, Ella was three and McKinley was one. 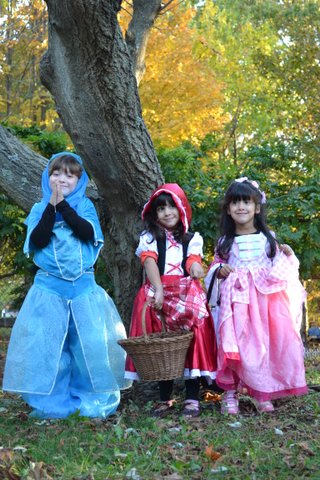 A favorite photo of my Ella as “I Dream of Jeanie”… Ana as “Little Red Riding Hood” and Nina as her favorite princess “Aurora.” Their mother, like me, often makes their costumes.

My son’s attempt at pumpkin carving!

I don’t remember any of my childhood Halloween costumes, school parties, carving pumpkins, or even going out trick or treating… not sure why none have never stuck in my head. I only remember one Halloween dress up when I was a teen… I cut my jeans into long strings and went as a hobo… not sure why I thought a hobo would have long strings on their pants, but that’s what I did! 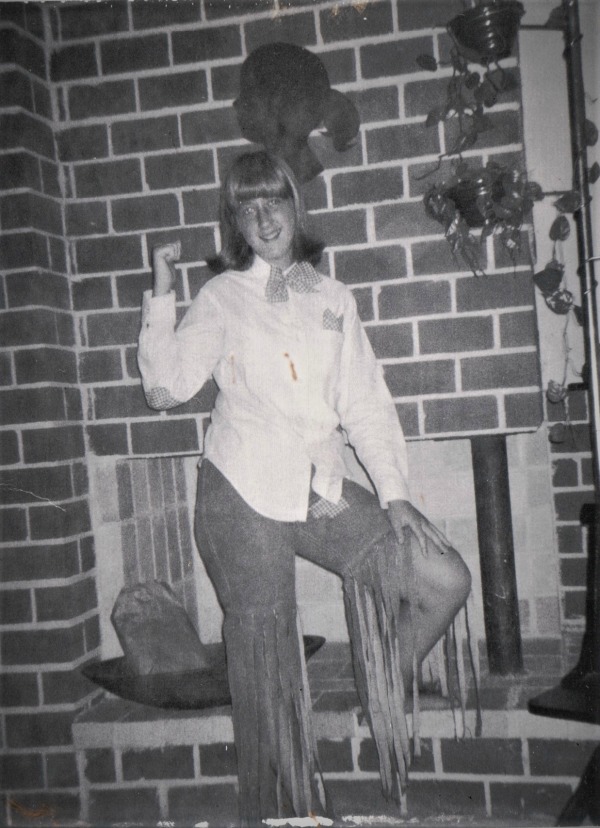 My silly attempt at a Hobo outfit as a teenager… not sure if this is what they wore, but its the only Halloween photo I have of myself!

Halloween in my youth was much more safer than today… we never had to worry about needles or blades stuck in candy, or drugs disguised as candy. Even in your own neighborhood today, you can’t let your children go out alone… and their candy must be looked at before eating. No one today would dare give a child an apple or homemade candy as in years past when people often made caramel apples or candy specifically to give out to the neighborhood children; it was a much safer event when I was young.

Hubby remembers… “Most of the time I dressed up as a bum… it was an easy costume and I’d carry a pillowcase… many people back then gave out full-size candy bars… and I always came home with a full bag. Today, people giving out full-size bars are far and few in-between! I think I only had one bought costume when I was in 4th grade at Thompson School, it was a devil costume my mother bought… I wore it to school for the Halloween parade.”

Halloween Dress Up of my in-laws! 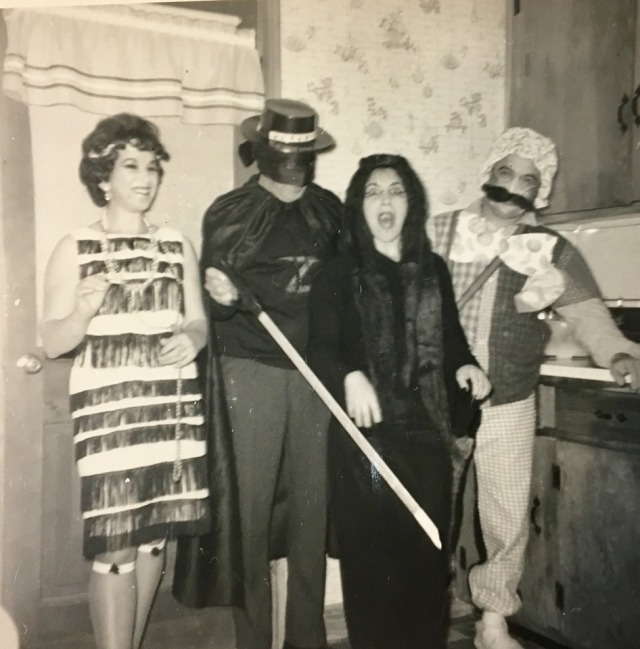 LtoR: Celia and Steve Insalaco, with Nancy & Gene (her sister and brother in law) My mother in law made quite the “flapper” in costume and what I wouldn’t give to have seen my father in law dressed as Zorro! Aunt Nancy looked awesome as Morticia, but not quite sure what Uncle Gene was supposed to be… 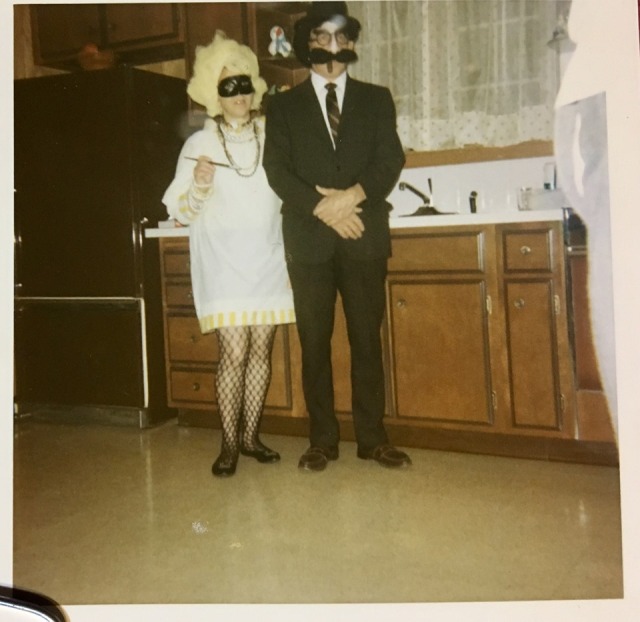 Another Halloween party has my mother in law as Phyliss Diller… and I’m thinking my father in law was maybe Groucho! In my wildest dreams… I never would have thought he would have ever dressed up!

When it came time for my children to enjoy Halloween, I mostly made their costumes… they were clowns, scarecrows, gypsies and even vampires. It was easy-peasy when they were really small, as those footed pj’s worked ever so well… it kept them snuggly warm on those chilly evenings. We usually took them to my husband’s parents and walked in his old neighborhood… then to great grandma’s house and his godmother’s house. They always had more candy than they even needed… or that I would allow to eat.

Always easy when your daughter wants to be a gypsy… wrap a black shawl around, find gaudy long necklaces and tie a bandana on her head! Easy, Peasy costume!

Today, we very seldom have any trick or treaters in our neighborhood…  I didn’t even buy one single bag of candy this year! In visiting my grandchildren the day after Halloween, I was treated to a few Snickers from their candy filled pumpkins… my favorite candy bar! From the looks of their loot… they did very well on Trick or Treat night!

My blog is at: https://everyonehasafamilystorytotell.wordpress.com/
View all posts by Jeanne Bryan Insalaco →
This entry was posted in 2019: 52 Ancestors in 52 Weeks, Daily Writings and funnies..., Family Stories and tagged Halloween, Pumpkins, Trick or Treat. Bookmark the permalink.