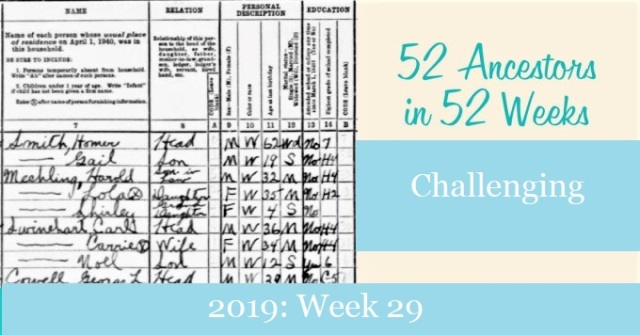 My husband’s family came here in the early part of the twentieth century as immigrants from Italy. I thought I’d focus on 1930 through the 1940 census to see how they prospered in the beginning of the depression… to the end… it was very “Challenging.” 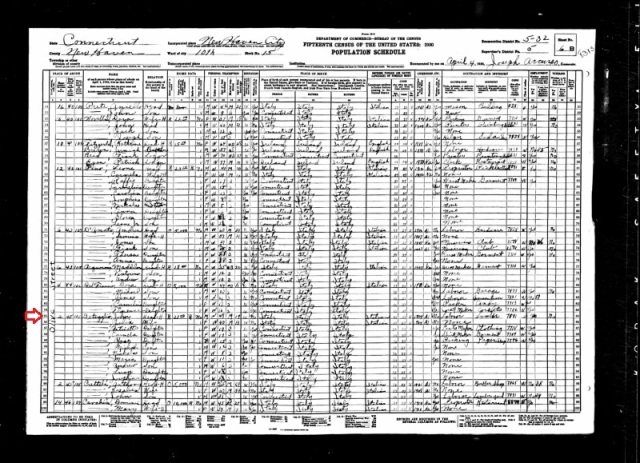 John DeTullio first came to New Haven, CT. in 1906, and lived in the “Little Italy” area at addresses of 2 Olive St., and 5, 15, 42, and 45 Warren St. He worked in various jobs, with the first one working for Star Line Co. (N.H.S.C.) as a dock hand at Belle Dock (record found on the 1918 WWI Registration Card). Later he found work at a local New Haven lumber company… DeForest & Hotchkiss at 115 Water St. John seemed to always work near his home as he didn’t drive. The 1930 census was challenging in as they misspelled his name as DeTugglio.

In the 1917 military census, John was listed as married, living at 5 Warren St., could not drive, was not a citizen, and had never served in the military; his occupation was then listed as a stableman.

The 1930 Census, showed that John and wife, Julia (Giulia) were living at 2 Olive Street, with their nine children, Antoinette, Carmela, Rosa, Michael, Nicholas, Maria, Andrew, Lucy, and Josephine; the children’s ages varied from 2 months to 19 years of age. At this time they rented, paying $21 dollars a month. Neither John or Julia were listed as able to read or write, but all children of school age were listed as able to. The language spoken was Italian… and from all accounts I’ve heard, it was always their dominant language used in their home. Several of the grandchildren, who knew their grandparents, told me how they didn’t have much communication with their grandparents… they didn’t speak Italian. The one odd question on this census to me was “did they own a radio?”… it was noted that “yes” they did.

By the time the 1940 Census was taken, the family had moved from 2 Olive St. to 42 Warren St., which was just around the corner… still remaining in the Italian “Wooster” area of New Haven; the family rented at $16 dollars a month. I was told that he often moved the family to less expensive rents through the years, and on Warren St., much family lived there. I never found if he ever bought, only rented. By 1951, Julia, widow of John DeTulio, was living at 55 Carlisle St. in New Haven with son Nicholas. (I’m not sure if she rented or owned, but I believe that house was bought)

Even though I found Giuseppe’s destination listed on the ship manifest at Ellis Island for 178 Frank St. in New Haven, CT, I never found him actually listed in the city directory until 1920… after returning from WWI, where he was then listed as a barber at 668 Washington Ave., West Haven, with a residence now of 178 Frank St; previously listed there was a Thomas Foormichella and Grava Angelo. He may have boarded with them before going into the Army… possibly why his name was never in the directories; there were many boarding houses on Frank St. in New Haven… a big area where many immigrants settled to.

Discovering this ship manifest was indeed a big challenge… discovering it many years before “Ancestry” and “Family Search” was even online. I found it by sitting in front of a fiche machine at a local LDS library, scrolling page by page… looking at each name on every ship manifest page. Luckily I knew the exact date he arrived or I’d never have found him… most definitely a “challenge”! 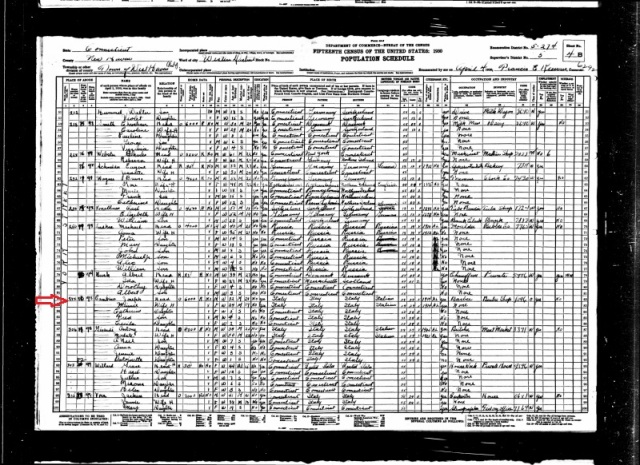 On the 1930 census, Joseph was now married, working of his own accord at his barber shop (Buddy’s Barber Shop) at 668 Washington Avenue in West Haven… but now living at 294 York St; he owned this home with a value of $6000… 3 children were living at home… Catherine, Fred, and Celia. Joseph was listed as able to read, write, and speak English, which was their primary language spoken in the home; all the children spoke and read English. I was told that he never spoke in Italian… and only wanted his children to speak English… he wanted them to be American. Joseph also owned a radio, and his grandson, Steve, remembers how grandpa enjoyed listening to his radio at the barber shop; it was kept on a shelf in the shop… and was always on. They also had a radio on a shelf in their kitchen at home and it’s the very one that we have today in our kitchen.

Joseph Cambino came here at the youngest age (18) of any of my husband’s grandparents… coming as a single man… and the only one to own a business… and buy a house at an early age. He operated his own business by age 25, never rented except for when he first arrived… and bought three houses during his lifetime. He and his wife, Minnie (Domenica) first lived in a small back room, in the building of his barber shop, but within a year or two he bought his first house on York St. in West Haven, Ct. (It seems Giuseppe Cambino was the most prosperous of my husband’s immigrant grandparents.)

Gambino / Cambino Through the Years 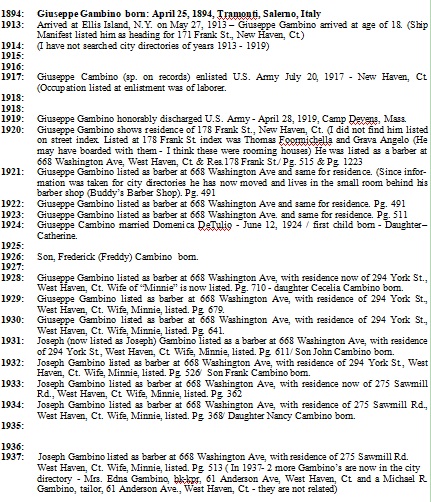 Stephen Insalaco entered the United States more than once as a single man, but it wasn’t until 1920 did he finally return… now as a married man with his wife and children. It’s told he was ordered to serve in the Italian army before being allowed to leave with his family.

Stefano first came in 1909 with his brother, Gaetano… both listing their destination as N.Y., with an address of 3 Monroe St.  It was told to me that he didn’t remain long in the United States before returning back to Italy; it was also said that he went to Argentina to work on laying train tracks in between coming to the United States. I was never able to document any information on those Argentina trips, but I do know that he returned to Italy and remained there to serve in their Army… by their demands. Before returning with his family, he came again to live with cousins in Willimantic and work in the Willimantic Thread mills.

By 1920, he returned, for the final time, to the United States… bringing his wife, Giacinta, and two children, Louise, age 2 and Anthony, age 2 months. Their destination was to their cousins in Willimantic, CT., where work was promised in the Willimantic Thread Mill as a weaver; he had worked there on previous trips.

The 1930 Census finds Stephen and Giacinta have moved their family now to Shelton, Ct. where he found work at Bloomenthols, also a textile mill. They rented for $15 dollars monthly at 131 Oak. St… both were listed as able to read and write… six children were living at home; no radio was owned.

They made a few moves during the 1940’s, and was later found at 346 Coram Ave. in 1940. His occupation continued to remain as a weaver, and now renting at $18 dollars a month. It was noted that he did not work at all in 1939 and their only other income was “zero”  …with 9 children at home; not sure how he supported them all. It was told to me that at one time, Giancinta took in laundry and later worked at a local shirt factory folding shirts. I’m sure there was other income coming in as my father-in-law (Steve) always talked about how he worked at a local grocery store delivering groceries, from age 8, to help support the family. Finally, after moving from Coram Avenue, Stephen  and Giacinta bought their first house on Kneen Street in Shelton.

Insalaco Through the Years

Only two, out of my husband’s three grandparents who immigrated here bought houses. It seems the one (Joseph Cambino) who came here at the youngest age of 18, and single, worked himself up the ladder at a quicker pace. Was it because he acquired an occupation of a barber in the Army? However it happened, he worked for himself, quickly owning his own business… definitely a challenge!

If I hadn’t already gathered information on his grandparents from all his children, I would have later discovered this information through the census… such as year of immigration, marital status, where immigrated from, residences, children, age at marriage, and property owned.