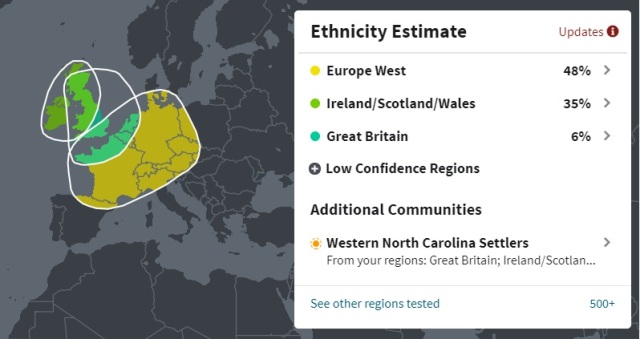 The “DNA” on Ancestry made updates last year… changing everyone’s original percentages… some good… some unexpected! The picture above is my original DNA results – below is updated results. 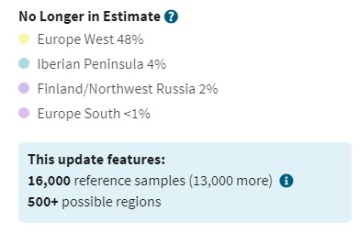 The initial Europe West of 48% has updated to Great Britain at 71%. My Ireland/Scotland/Wales of 35%, decreased to now 20%, a fifteen percent decrease. I lost totally the Finland/Northwest Russia 2% and Europe South of 1%. I’d wondered where I figured in on the Russia DNA… I now have 7% DNA of Norway descent and 2% of Swedish roots to figure out!

My DNA matches tell me I have over 1000 new cousins to weed through… so very overwhelming!

Why did my DNA change? Ancestry says that they now have over 16,000 reference samples, instead of the 3,000 which they used to analyze my sample. I’m wondering if our DNA samples will continue to change as more people test?

A little Ancestry DNA info: DNA is made up of strings of four different letters: A, C, G, and T. Our old algorithm looked at one letter at a time, and based on where that letter appeared in your DNA, it decided where that bit of DNA came from. Our new algorithm reads longer stretches of your DNA at once, making it easier to identify regions of the world where you ancestor once roamed.

My last DNA post showed 30 circles, but since that post …. they have increased to now 36 circles. While they aren’t definitive… it’s another tool offered in looking to prove or disprove your ancestor… and discover new cousins. Another tool called “Thrulines” is now, somewhat, taking over the circles… it’s become the hot topic in the genealogy blogs lately… I need to take a peek!

All these changes, especially adding more members into my circles, tells me that there more people are testing their DNA… interesting to see the changes!

Ancestry once said the DNA circles go back 6 generations – I’m still waiting for no 6! Maybe they’ll break down my brick wall on John Bryan for me… that would be getting my money’s worth!

New Ancestor discoveries that are not in my family tree, but listed to me as a possible connection through DNA: I will be checking into…

Stay tuned for Week 16… Out of Place