If you’re new to genealogy, make your “first” stop to Amy’s website for genealogy ideas or even join in on this 52 Week challenge… you learn by doing… not procrastinating! There is no right or wrong… anything you do is a start

I’m hoping Nancy Drew will come along and help me break down my “Brick Wall”… brick by brick… on John Bryan (circ.1753 – 1835). I’ve packed a bag… just as Nancy would… you can’t go on a hunt without your notebook, pen, flashlight, a good magnifying glass and a cellphone. I bet Nancy would have solved more mysteries if she’d had a cellphone!

In trying to break this ongoing brick wall on my John and Nancy Bryan… I’m going through Ancestry… again… and trying to deduce… who isn’t my John Bryan, just like Nancy would do!

The original inhabitants of Franklin County, Georgia were the Cherokee and Creek Indians; the Creek Indians were more warlike, unlike the Cherokee who were more peaceful. Over the years, the Indians became indebted to the new white settlers, which led to the treaties of 1773 and 1783 where they eventually relinquished claim over the land to the white settlers. Franklin County, Georgia was formed on February 25, 1784, from parent lands, ceded by the Cherokee and Creek Indian lands in the Treaties of Augusta in 1783… land lying between the Ogeechee and Oconee rivers.

Did the opening up of land in Franklin cause my John Bryan to move there?

The Treaty of May 31, 1783, between the State of Georgia and the Cherokee Indians, is what led to the development of the ninth county, Franklin County in Georgia… the 1st new county formed in Georgia after the Revolutionary War. It originally had encompassed parts of South Carolina and land covering twelve future counties in Georgia.

The first of my Bryan line was found in Franklin County around 1785.

The Treaty of Beaufort in 1787 allowed the secession of the northern section of Franklin County to South Carolina and ended on November 3, 1914, with the formation of Barrow County.

Often my James Bryan is seen listed as born in Bates County, Georgia… but there is no such-named county!

Franklin County, along with Washington County, was the 1st new county formed in Georgia after the Revolutionary War… and now Georgia’s 9th county; so named in honor of patriot Benjamin Franklin.

The state of Georgia soon began offering land grants in Franklin County to veterans of the War of 1812, but the land there was so remote that many veterans never took advantage of their rights of ownership; Franklin County is located in the western corner of the state, bordering to the county of Oconee County, South Carolina.

Franklin County was a huge territory that eventually became the parent county to new counties… Banks, Barrow, Clarke, Jackson, Oconee, and Stephens, and also parts of Gwinnett, Hall, Hart, and Madison, as well as three counties that are now part of South Carolina. Is it possible that my Bryan’s may have ended up in these counties when the lines changed? In those days, you could easily live in a different county from one day to the next! The Franklin County Courthouse wasn’t built until 1906 in Carnesville, which is also the county seat of Franklin.

The Treaty of Beaufort in 1787 allowed the secession of the northern section of Franklin County to South Carolina. What about the land given over to South Carolina… could I be missing Bryan records there… somewhere?

My early Bryan’s had moved from an undetermined place in 1787, and now found in Franklin Co., Georgia. The first census taken in Franklin County was in 1790, showing a count of 1,041 in population.

I question why it was filed in Gwinnett Co., but I did find Nancy Bryan(t) and Ittar Bryan(t) listed on the 1830 Gwinnett Co. Census; a Harrison Bryan(t) was also listed nearby. Nancy moved there with son Ittar/Illac… this possibly proves her husband, John, was already deceased by 1830. Why did she wait until 1835 to apply for letters of administration? 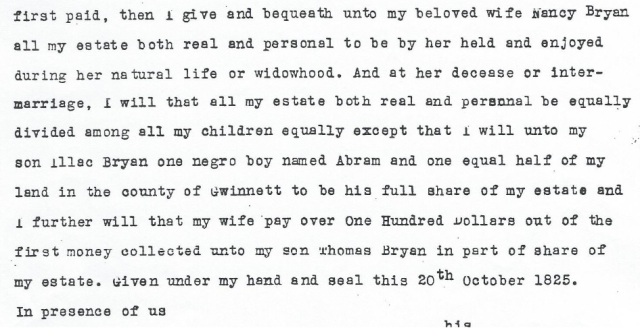 Excerpt of will of John Bryan: Even though “only” two children were listed by name (Illac & Thomas)… it also states “all my estate both real and personal be equally divided among “all” my children. It would have made it much easier for me if he had listed “all” his children!

These are the children I believe to be of John and Nancy Bryan… but who was the 8th child, could it be Harrison or Callaway Bryan? My James Bryan named a son Callaway… he could have named him after his brother.

Many “BRYAN” researchers have surmised that our John and Nancy Bryan may have come from Rowan Co., N.C.

This relinquishment proves that a “John Bryan” is the father of my James Bryan. The Joel M. Bryan is the son of John Bryan Jr. (James brother) and wife Nancy Mayes. Many researchers initially tied Nancy Mayes into the John Bryan b. 1753/60, but that has been proven untrue; Nancy Mayes married John Bryan, Jr.

It seems everyone tries to hook into the will of John Bryan (1825) in Franklin County, Georgia. In my ongoing search for my elusive John Bryan with a wife of “Nancy”… I’ve been trying to deduce on Ancestry all the John Bryan’s that are not My John Bryan.

The heirs of a “John Bryan” sold land in 1790 by document above… as Davidson County is adjacent to Rowan, N.C…. could this be a clue to my Bryan line?

This 1790 Rowan Co., N.C. census shows a John Bryan and a James Bryan. Were they related to the “heirs” of John Bryan in Davidson Co. and the James Bryan? (why did they have to use the name John & James so often in our Bryan lines?)

From the 1750s, up onto the time of the American Revolution, Rowan County included most of the frontier area of Western North Carolina. All or portions of the present-day N.C. counties of Alexander, Alleghany, Ashe, Avery, Burke, Caldwell, Catawba, Davidson, Davie, Guilford, Iredell, Lincoln, McDowell, Madison, Mitchell, Randolph, Rockingham, Stokes, Surry, Watauga, Wilkes, Yadkin, and Yancey fell within the bounds of Rowan County at one time. 1865: 18th century land grant records were destroyed by Federal troops. 50% completely destroyed and 25% partially destroyed with 25% remaining intact…. The records I need to prove back to my John Bryan and beyond were possibly those very records?

Many Bryan researchers believe our “John” to have been born in Rowan Co., N.C. The early pioneers in Virginia and North Carolina often migrated slowly into warmer climates as they opened up… Georgia held much of that for them, especially as Franklin County was formed in 1784.