This week’s prompt was a toughie… I had nothing… well, almost! My great-uncle John William Gossett had always been known as a bachelor to me… for as long as I’d known. It was only in the past few years, did I finally find him again, and learn he had married late in life. But the sad part was, I just missed connecting with him… by the time I found where he was living… he had sadly passed away.

My original records on Uncle John William listed him as born in 1919, but after searching on Ancestry, I found he had written 1920 his WWII Registration card. I then found him on the 1920 Census with his parents… his age was listed as “0”. Now I was puzzled… but after checking the date the census was enumerated… I had my answer. The census was taken on January 13th, 1920 and listed him at age 0… well if he was born on Dec. 15, 1919, he wouldn’t even had been one month old on that day (13th)… and if truly was to be born on Dec. 15th of 1920… well, his mother wouldn’t even have been pregnant as of that day (Jan. 13th). But surely, by the time he filled out his WWII registration card… you’d think he would have known his true birthday!

John William Gossett shared a mother, Alma E. Wilson (Little) with my grandmother, Evelyn Irene (Little) Bryan; she was the only child from Alma’s first marriage to Eugene Little (unk – 1916), she had half siblings of:

Uncle John William Gossett’s mother died in 1929… he was only ten years old. His half-sister Evelyn Little Bryan was already married and had two boys, Robert “Floyd” Bryan (1925-1980) and Harold “Clayton” Bryan (1928-1983). Just a sidestep thought here... funny how both my uncle (Floyd) and father (Clayton) always went by their middle names!

I don’t know what happened in the family after the mother died, as her death of suicide was a tragedy for the family… it seems the father John W. Gossett Sr. left with someone and went to Cincinnati, Ohio. I’m not sure where the Gossett children lived after their mother’s death… some of his children may have went with him to Ohio, but I don’t know. He died a year later on May 2, 1930, and his body was brought back and buried next to John’s mother in Wisteria Cemetery, Union Point, Georgia. … I had heard that Uncle John William lived with his sister, Evelyn, for awhile… but not wanting to be a burden on her and the family, he joined the Army at age 16. I did find his WWII registration card, but nothing further as to when he joined; the registration card was signed when he was age 24 (1943). If he was signing a card at age 24, then he hadn’t joined the army as I had previously heard through the family.

When Uncle John William’s mother died in 1929, his sister Beulah was 22, Josie was 21, he was ten, and his sister Louise was 8… the youngest. If the father went to Ohio with a friend and left them, then most likely the two oldest sisters took care of the family. Further searching found that sister Beulah married in 1923 and had two children by 1930 and lived in Union Point, Ga.; no other children were found in her household. Maybe by the time Louise came to live with my grandmother Evelyn, the two oldest married and John William had joined the Army.

The 1930 census did not show him living with his sister Evelyn, but the 1940 census showed his sister Louise Gossett living with Evelyn (Bryan), also her half sister; she was age 16. I did not find Josie on any census… she could have been keeping John William and Louise, but they did not show up with her on a census record in my searching. It was only in 1940 did I find Louise, age 16, living in the household of my grandparents, Paul and Evelyn Bryan in Union Point, Georgia. Louise could have come to live with them after the 1930 census was taken… I had heard that she lived with them for a long time… being almost a sister to my father, Clayton Bryan.

Info from obituary online: Uncle John William was 21 years of age when he joined the U.S. Army in 1940… serving in the 29th Infantry Division, working in various positions around the world. From all I had heard, he had joined at age 16 and my grandmother signed for him, but the year of 1940 was listed in his obituary. Uncle John was a 1st Sgt. (E8) as of Dec. of 1959, retiring as a Master Sgt. (B7) from the U.S. Army in 1960 at Fort Jackson, S.C. with an Honorable Discharge. He was awarded the Commendation Ribbon w/Medal Pendant (3rd Award); Expert Infantry Badge; and Good Conduct Medal (4th Award).

This WWII registration card listed his birthday wrong, he was born in 1919. It listed his age here as 24, making this card written in 1943/44, but his obituary listed him joining the Army in 1940.

After John retired he drove trucks cross country for about a year, then later attended Barber College, where he cut hair for a short time; he then bought a bar and grill in Atlanta, and ran that for several years before selling it and returning to work for the U.S. Civil Service Commission. He was then employed by the DSA, DCASR Atlanta working for the Army Air Force Exchange Service as a Quality Assurance Specialist with a Duty Station in Jackson, MS. He retired from this position in 1975

My cousin Robert Bryan remembering Uncle John William Gossett: Grandmama’s brother, John William Gossett, was still in the army when I was a very small boy.  It seemed to me that he was always at there house for Christmas. As I remember it today, no matter where he was stationed in the world, he’d always make it home, usually sometimes on Christmas Eve. He was a happy go-lucky type of fellow, as I remember. I guess as a small child this impressed me because he always had stories to tell that kept me spellbound. I don’t remember this story… but it was always told about him not making it home one year for Christmas. As the story goes he called Christmas morning… he was in jail in Crawfordville. Seems as though the local cops had stopped him for a DWI. They told him if he would pay a $300 fine, he could leave. In his typical flare, he told them that if he was drunk enough to get stopped, he was drunk enough to go to jail… he smelled a scam and the cops wanted a little extra Christmas cash.  My father and granddaddy went there and the Justice Of the Peace let him go for a $50 fine.

I only vaguely remember him coming to my grandmother’s house, but I always heard him talked about. The one Christmas I do remember was when he gave me a Cinderella watch… and I still have it today. I always heard him referred to as a bachelor… but after he retired in 1975, I was married and living in Ct., so if he visited my grandparents I have no memory of hearing about him coming. My father died in 1983, and he was not at the funeral, so I’m not sure where he was even living at that time; my grandparents never mentioned him to me. 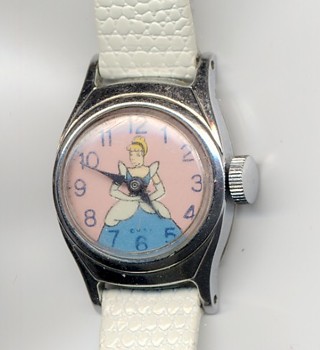 I had always known of Uncle John William as a bachelor, but it seems he did marry, not once but twice. He married late in life to Fanchon (Jones) Johnston in August of 1970 and they moved to Douglasville, Georgia. I’m told that she was the love of his life, and he was devastated after her death in 1994. He later met and married again, but it was more a companionship marriage; they divorced after a short time. In 2005, he moved to Zephyrhills, Florida to live with a nephew; he was very active in the senior clubs and a member of the Red Hat Society of Dade City, which included men.

Uncle John never had children with either wife, but he was a remembered uncle to many nieces and nephews… a bachelor uncle to me until I learned of his death in 2013. For some reason, I had begun looking for him a few months before his death after discovering an address for him in Douglasville, Georgia. I wrote a couple of letters, but they were never returned or forwarded to him in Florida… as I never heard back from him. It was only after connecting with family of his sister Louise, did I learn sadly of his death just a few weeks too short of connecting with him.