I have wanted to knit a pair of socks for the longest… and I have procrastinated in doing so as it most definitely intimidated me! But no more… as I have finally conquered those fears! Last year I joined a couple of Facebook groups, “Winwick Mum Sockalong” and    “Addicted to Sock Knitting”… and after seeing all their beautiful socks… I braved my fears! It was the Winwick group that pushed me to begin as they are a support group for newbies and the Admin (Christine) offers a simple pattern, help and more instructions than you’ll ever need on her blog Winwick Mum. If you’re like me, I hope you will brave your fears this year… so go Knit a Sock… or two… even better!

Starting my first pair of socks wasn’t too hard… as I do know how to knit and the cuff was only a knit 1, pearl 1. But the hard part was figuring out how I was going to accomplish this small circle. While I can manage using double-point needles (dpn), I’m not the biggest fan of them. Recently I acquired a few sets of the small 9-inch circulars… and am loving them, but there are others who don’t share that love! It was on those circulars which I began this first pair of socks. 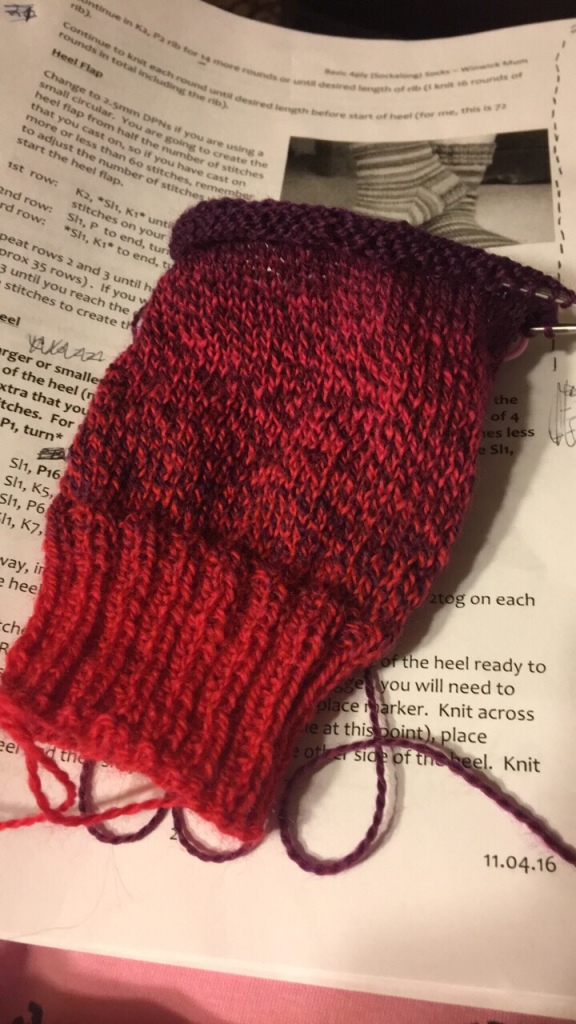 I had much confidence as I watched my knitting continue round and round and turn out a cuff, then I kept knitting to add a leg, then… I added a heel, then… I pulled my hair out! I read about the heel turn, which talked about gusset’s and picking up stitches… I was LOST! Just ask my husband how perplexed and distraught I was! Somehow I hadn’t placed markers, or lost them… who knew how important they would be… but they are, especially to a newbie knitter! 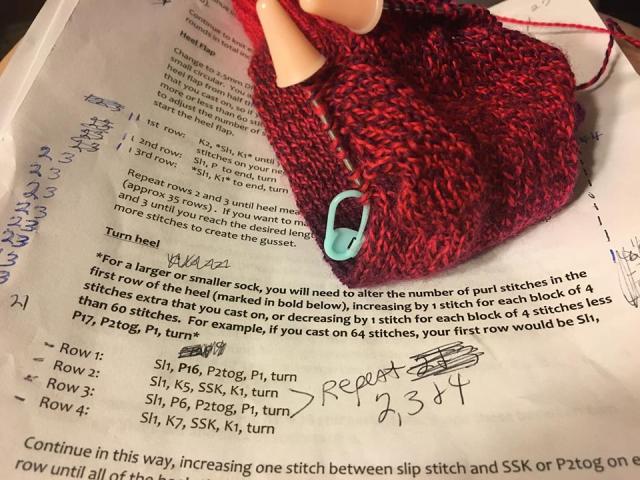 Finally… I managed to replace markers where they all should be and I’m ready to turn the heel. Does anyone scribble all over their pattern like me? But I’ve now bought finger counters… love them!

It was the Winwick Mum Facebook group who saved me… what a great group of supportive knitters they are… and what awesome socks they knit! I posted a photo of my sock and asked for help. Soon I had several comments and photos posted back to me as they talked me into continuing and showed me in photos where to place my markers. While I still didn’t quite understand the fundamentals of sock knitting, I did my best to place markers… where I thought they told me to. Not being a quitter, but I certainly heard my mother’s words in my ear… “just throw them in the trash and walk on.”

But that’s not me, so I took a deep breath, taking one line of the pattern at a time… and it finally sunk in as to what they were trying to tell me… to a point! It’s important when you make the heel turn on small circulars, to be able to distinguish and know where your “heel” actually is; I had to remove half my stitches to one dpn to work on as in regular knitting. If I had been knitting the sock on “dpn’s” from the beginning, I would only be working on two needles now, instead of the usual four and the heel turn wouldn’t have been as traumatic. There is also another way of knitting socks and that is using the “magic loop” method… I’ll explain that further down.

I have markers in place…. ready to Knit! You only increase on the heel-turn, on the direct three stitches beside your heel on both sides. Once you learn the structure of the heel and where each part is and what it does… it won’t look so Greek to you!

After picking up the stitches on the side of the heel and turning the heel… I was back to now having all my stitches back on my small circular… Yay! Now it became “easy peasy” sailing on down to the toes… or so I thought! Once reaching and deciding where I was to stop to begin the toe decreases, I had to learn a new stitch… the dreaded “Kitchener” stitch. After watching a few YouTube videos and learning the little verse to help in sewing it… I closed the toe.

YAY…. I knitted my first sock!

The one bad thing about knitting socks is… once you knit one, you have to start all over again to make the second one! Although, it was easier on me on the second go-round as I knew I must have markers and I knew where to place them on the second pair. Before beginning sock no. 2, I watched more videos on knitting socks… which I should have done before beginning sock. no. 1. I highly suggest that to anyone who wants to knit socks!

My “first” pair of socks! Although the coloring pattern didn’t end up quite exactly the same for the second sock, which many don’t… they are nice and warm though, and they fit! There might be a trick to accomplishing the exact coloring pattern… I’ll look into that!

Since completing my first pair, I have also now knitted a pair from my granddaughter and am starting a second pair for her sister… you know how one can’t have something without the other one wanting also! And there is also another pair waiting on my circulars for my next pair… for Me! Now I can justify buying new sock yarn… as my stash is depleted!

There are so many ways to knit socks… cuff down (which I’ve done), toe up, and two at a time (taat). Besides the various ways of knitting a sock, there are also countless pattern designs, although I’ve kept my first pairs with just the plain knit stitch… I didn’t need anything else to confuse me in learning them and I strongly suggest you don’t tackle a pattern on your first pair either… until you have the structure of the sock clearly defined in your mind. I feel I could confidently conquer it now!

I have not begun a “toe up” sock, but it’s also next on my list… as is the “two at a time” sock knitted with the magic loop method; I’ve recently taught myself this by watching videos on YouTube. It looked complicated, but after watching a few times and practicing… I seemed to have managed it pretty easily. The magic loop style allows you to knit anything in a circular… no matter how small it may be. The only other way you could turn something into a circular would be to knit it flat and seam it… and I detest seaming!

This is how I hope my clothesline will look one day, filled with all my knitting! Photo used by courtesy of: Lisa Lindsay (40 socks grace this line in Canada. Lisa has been knitting since she was ten years old and knitting socks now for ten years)

I have a feeling that a pair of socks will always be on my needles… as there are so many colors to choose from, patterns to knit, and various heels to try… well, it makes you just want to knit one of every style you see. If you’re a knitter, I hope to hear from you and what’s on your needles!

My blog is at: https://everyonehasafamilystorytotell.wordpress.com/
View all posts by Jeanne Bryan Insalaco →
This entry was posted in Craft Junkie, Daily Writings and funnies... and tagged Craft Junkie, knitting, Knitting Socks, magic loop, taat. Bookmark the permalink.