The Great American Eclipse of 2017

In my 1st post on the eclipse, I promised that I would post what I saw, or didn’t see, and what photographs I managed to take during the eclipse. Well, I didn’t manage to take any photographs of the actual eclipse or the shadow snakes… it was more overcast than sunny in Connecticut!

I asked my granddaughter McKinley (age 5) if she knew about the eclipse and saw it while at school. McKinley said… “yes we watched it at school on the TV and then through little glasses.” But will she remember it one day!

I’d hoped my mother in Georgia would take a look at it, but she wasn’t interested in it either. When I told her the next one wouldn’t be around until 2045… that got me nowhere! She said she’d wait for the next one…

As I knew I wasn’t going to be able to take any of those professional photographs I’ve seen before, but so wanted… I settled to take a photograph of a Connecticut cut-out showing a couple of pin holes and a shadow of it. I did bring out a colander to try for eclipse shadows or shadow snakes, but the sun just wasn’t cooperating.

Many of my Facebook friends did grab some shots, and with their permission, I’m posting a few below. 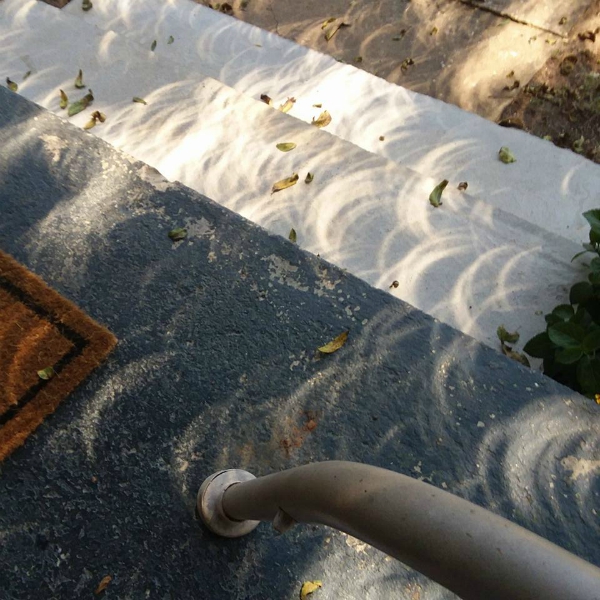 My friend, Carlene Noggle, from Greensboro, Georgia, shared with me her “shadow snakes” that appeared through the tree branches on her front steps. I wrote about them in my first post, but I didn’t see any because the bright sun just didn’t cooperate! 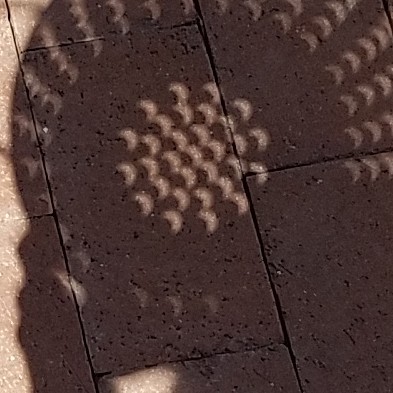 Vera Marie Badertscher, blogger of Ancestors in Aprons, graciously shared her “colander” experiment photo with me. Our sun didn’t shine bright enough in CT. to show the eclipses through my colander, and I tried…but hers worked great! Vera’s eclipses are from Tuscon, Arizona.

While… My attempts never materialized, either due to low sunlight for shadows or me not knowing what I was doing… I think maybe it was the latter! Oh Well, I can still say I was there and I looked through my “eclipse” glasses and saw the sliver of sun shown here in CT., while hubby stood with his welding helmet shield to watch! I must get a “do-over” picture of that! 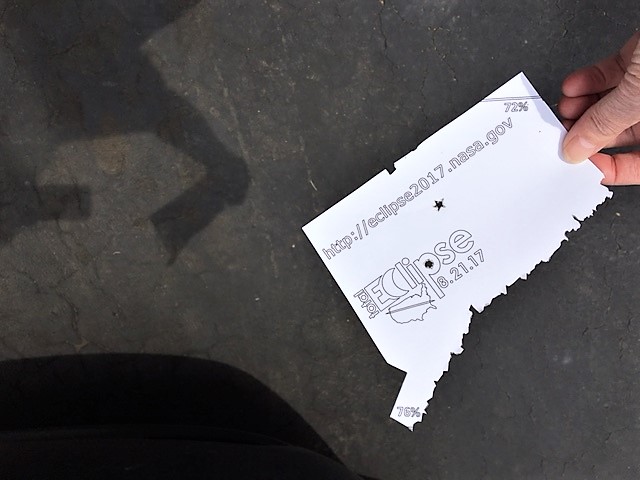 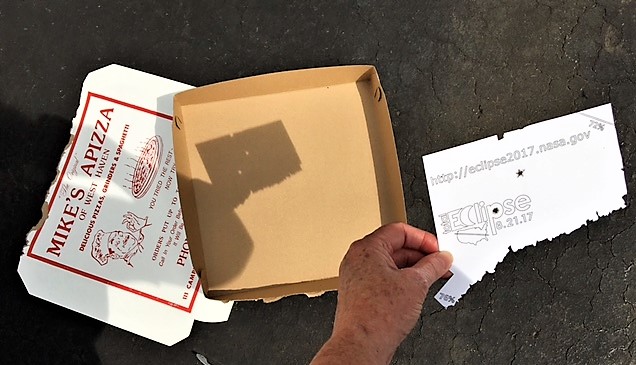 Thanks to Mike’s Apizza… I had a box for showing the shadow of CT.

Sorry, no eclipse photo from me… just a shadow!

This was what I would have gotten if I had a dark solar filter, but thanks to friend James Holt…. for taking this photo!

My blog is at: https://everyonehasafamilystorytotell.wordpress.com/
View all posts by Jeanne Bryan Insalaco →
This entry was posted in Daily Writings and funnies..., Family Stories and tagged Eclipse of 2017, Shadow Snakes. Bookmark the permalink.