I married and moved away from home when I was 19, so I didn’t grow up stopping by Mama’s for afternoon chats. Living almost a thousand miles from home, a nightly phone call is how I stayed in touch, as she’s gotten older, it’s how I check in on her. As I became involved in researching my family history, it was often how I heard the family stories. I recorded the usual dates and names, but all the tidbits of family stories…. well where was I going to put them. That was how Conversations with Mom evolved, and I eventually blogged those conversations. What better choice, than to glean an A to Z of my favorites here to celebrate Mama’s birthday month; she turns a spry 87 this April, but “mums” the word on me spilling her birthday number here!

During the month of April, I’m participating in the Blogging from A to Z Challenge for my 2nd year… both on this blog. I will post each day, except Sundays… using a daily alphabet letter in my theme of “Conversations with Mom… The Best of.” If you’d like to read more blogs, hop over to their Facebook page. 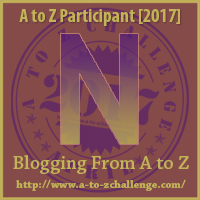 N… Conversations with Mama – The Best of!

N is for Night…

In the summer, my first question is usually – how hot is it tonight in Georgia? “It’s kinda cool tonight, I turned the air conditioner off. I just like to be comfortable, not cold.” Soon the conversation turned to my dad… “When your father came to the farm he always laid on the bed and took a nap. I know my mama wasn’t happy, as she didn’t like anyone to lay on the bed once she made it, but she never said anything. He always made a big dent in the mattress too… those were only cotton filled mattresses, not like the ones we have today. I don’t know why he felt the need to take a nap when he came, but he did. My father used to say, “He should be buried standing up as he’s laid down enough during his life.”

When I called mama tonight I asked if she had ever sucked on a honeysuckle to drink the juice; I had posted a photo of honeysuckle on Facebook today and under the picture, it said, “remember when you sucked the juice out of a honeysuckle.” Well I’d never heard of that, but many of my Southern family had; I guess I grew up under a rock! So when I asked mama…”Oh, yea I did that, but you had to be careful or you’d suck down a little spider in sucking that sweet juice; I did that once, but I didn’t swallow it – I coughed that spider up! We always drank the honeysuckle juice when they bloomed. I also chewed on something we called “sour grass” which tasted kinda tangy, and there was some type of weed flower with pods, and we’d put them in our mouth; the seeds would pop out, not sure if we ate them or not – or even why we did that. I guess it wasn’t poisonous, as I’m still here at age 86. I don’t know why we did those things, I guess we were just entertaining ourselves; we had to find things to do or our parents would find things for you to do – you never told your parents you were bored.”

In asking how her ant situation is… as last night she told me she finally bought ant traps… “Oh they’re gone, I told you I’d get rid of them. I had told them they better get out! Ants come in when it’s dry, looking for water. It’s been very dry here all summer, it rains out at Carolyn’s in the country, but not around my house. The ground is so dry! I pulled up my tomato plants and threw them out, only little tiny knobs growing and they were dying. Plants won’t grow from just tap water, they need real rain with nutrients to grow and produce.”

In telling mama how McKinley, Ana, and Ella are taking ballet classes, she said…. “I used to be able to put my leg up on the bar and lay my head down on my leg flat. I might do that now, but someone would probably have to push my head down toward my knee and I’d probably hear a crack (laughing), but I might still could do it. (All I can picture in my head is the Lucy episode where she got her foot stuck on top of the bar and couldn’t get loose). I was very limber, and I could even stand on my head… you have a picture of me doing that. Too bad we didn’t have a camera back then as one day when my father saw me, he just flipped down and stood on his head. Now that would have made a great picture!”

“I was thinking about Flat Rock from the other night, yes there was a spring there too. I remember hearing my cousin Kenneth talk about it. I never saw it, but he used to go swimming there with some of the guys. I probably wouldn’t have even jumped in, thinking there was probably snakes around. Too bad they didn’t make Flat Rock into a resort, it was something to see… you could walk around and around and see nothing but flat rocks. I never knew who owned it back then, but everyone went there to have picnics. Daddy sometimes even went fox hunting down there, the dogs tracked the foxes over the flat rocks while the men sat and probably had a few cigarettes… listening to them bark and howl.”

Every night in talking to mama on the phone, I yawn… and you know what happens when you see or hear someone yawn… You Yawn! “I just heard you yawn and now I’m yawning, I just don’t understand why people do that. We don’t do other things when we hear or see people do, but if they yawn, well then you’ll do it too.”

“Do you remember the time I went to Texas with Joyce from the club (Moss Oaks) in Perry. She had family there, but it was a spur of the moment trip that night when we left the club. We headed to Atlanta, bought tickets on Delta, but missed the first plane out that night and had to wait for the next one; the first plane was hijacked to Cuba that night. I remember telling Joyce, “dam I missed a free trip to Cuba.” She was like, “don’t mention Cuba when we get on the next plane.” Things didn’t matter to me back then, whatever way the wind blew was OK with me. I think Willie Mae and Henry went to Cuba one time…he had won the trip from the insurance company he sold for. Henry worked for Life Insurance a long time, but your father left them when we left Union Point.”

I called mama tonight to ask if Hurricane Andrew was affecting her, and… “No nothing here, just a dreary day, maybe some rain will come later, as we sure need some. It’ll probably rain when you come! We could go to Crawfordville while your here, the home of Alexander H. Stephens is there (Vice President of Confederacy); I went there with my school, but we never went inside. I think it might have been the 4-H club I belonged to. In the summer we spent a week somewhere around near there; we stayed in log cabins.” 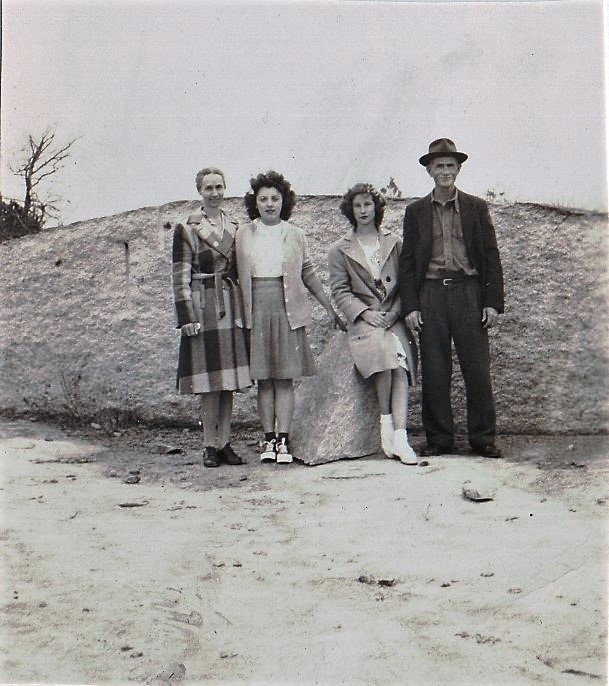 Mama with parents and her sister-in-law. Mama was always daddy’s girl… she was about 16 here. They had taken Leroy’s wife for a picnic at Flat Rock.

My mother grew up on a small farm in Georgia and has more memories of her childhood than I can only dream to remember. If you’d like to follow along from day 1, click on 2017: A to Z… Conversations with Mama – The Best of!

My blog is at: https://everyonehasafamilystorytotell.wordpress.com/
View all posts by Jeanne Bryan Insalaco →
This entry was posted in 2017: A to Z... Conversations with Mama, Daily Writings and funnies... and tagged A to Z challenge 2017, Night. Bookmark the permalink.