Now I know what to do with those photos – “thanks” to Heather Wilkinson Rojo at Nutfield Genealogy; she blogs Weekly Wednesday Weathervanes  in New Hampshire.  Please check out her page and enjoy the many unusual weathervane photos and often you’ll be entertained with a history lesson. It’s amazing at what you can encounter in your travels – You Just Need To Look Up!

In as many farmers that I have in my family, this fits right in with my family occupations as “dirt farmers”. This farmer plowing weathervane sits atop the Orange Ct. Town Hall and is the symbol of their town motto. A flag with the same symbol flies on the grounds. 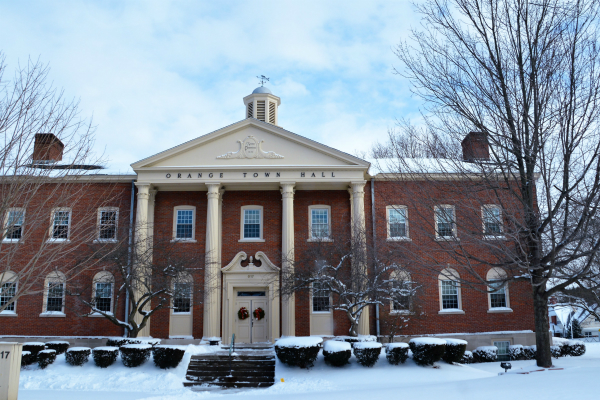 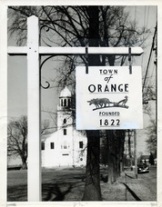 The Paugusset, an Algonquian people, once lived in the area now known as Orange. The land was purchased from the Indians in 1639 by Rev. Peter Prudden, and bought for six coats, ten blankets, one kettle, twelve hatchets, twelve hoes, two dozen knives and a dozen small mirrors… what a steal!

Orange grew strong through the 19th century and began the separation as early as 1848 from West Haven, but it was not until 1921 that it became official. The two were separated by act of the Connecticut General Assembly and the new city of West Haven was formed from the southeastern portion of Orange. Orange remained more rural, while West Haven was becoming more urbanized.

The area began to grow through the opening of the Boston Post Road, now U.S. Route 1, and the Derby Turnpike, now known as Connecticut Route 34. The turnpike was once just an Indian path until it was expanded into a turnpike around 1800. It soon became a toll road through New Haven, Orange, and ending in Derby; the toll house was located midway in Orange; they ended tolls in 1887.

Orange continues today in remaining rural with several farms located throughout the county. The yearly Orange fairs, in keeping with a rural theme, are geared to events such as tractor pulls, animal showings, vegetable, flower, craft and baking juried events, as well as skillet tossing for fun. I have entered their craft juried events in the past and won a couple of 1st Place Blue Ribbons for my wood paintings. I need to practice my skillet tossing and give that one a shot in 2017!

My Santa won 1st Place in the Orange Fair!

My blog is at: https://everyonehasafamilystorytotell.wordpress.com/
View all posts by Jeanne Bryan Insalaco →
This entry was posted in Connecticut History, Daily Writings and funnies..., Weekend Weathervanes: and tagged Orange CT, weathervanes. Bookmark the permalink.