Turner Family Research: William Pinkney Turner – Who are your Parents

Who Are His Parents?

It’s been two years since I wrote a post on my great great grandfather, whom most called Pink or Pinkney Turner. It was when I discovered him and his unusual name that I finally solved the puzzle of who my grandfather Paul Pinkney Bryan was named after. My original post can be read at…Week 42: 52 Ancestor 52 Week Blog: William Pinkney Turner and Laura A. Gooch

Recent contact on the above blog post resulted in new family contacts and questions… questions that I couldn’t answer, such as…

And once again… I’m pulled back in for another g0-round of searching for William Pinkney Turner!

I’ve planned this post to be an ongoing post…. adding to it when new information is found; making it’s a little different from my previous posts, which I have posted in completion. Maybe at some point, I will be able to stamp it completed when I discover Pink’s parents and of where the name “Pinkney” originated!

Once again back to Basic 101 of what I know!

My SPECULATION ON JOHN AND HANNAH TURNER… 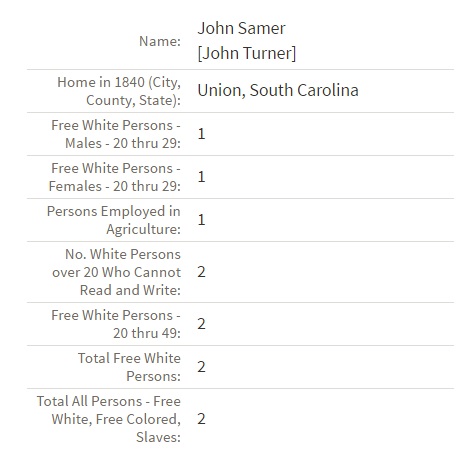 I do believe, at this time, that this is my William P. Turner in the family of John and Hannah. Living directly next door is Clementh Abercrombie, whose daughter Sarah Fanny Abercrombie marries Oliver Turner.

While this William is clearly not my William, but could Berryman be a brother to John Turner – family is three families away from each other.

A work still in progress…..