We decided mama needed a day of rest today after dragging her all the way to Sparta… a swishing and a swaying in the back seat; she will never forget those words!

As hubby and I left to run errands, mama asked if I had seen the cast iron pieces she had bought us. When I said no, she began looking for them, but finally gave up. I said, “I bet they’re still in the car“, but she disagreed quickly, shaking her head no. She soon went outside, returning a few minutes later telling me that the cast iron pans were laying outside on the table. I couldn’t resist asking…. “so they were in the car?”  She just gave me a look, with a muffled “yes” and went back to her movie… calling Boo to join her!

When hubby got in the car, I asked him if he saw the pans on the table that mama found. It was when I said, “one of them is a Griswold” that he put the car in park. He brought them back to the car, saying he wasn’t chancing that someone would come along and take his cast iron. Nothing makes him more happy than a rusty piece of cast iron that he can restore back to life; the lye bath in my cellar has a huge waiting pile to be cleaned!

While out, we went in search of the “Poppy Lady’s” (Moina Michael) gravesite, but for the life of me… I could not find it. I was in the correct cemetery, but the location where they told me… well it wasn’t to be found. While I enjoy riding through cemeteries, mama never understands when I ask hubby to pull over for photos. I’m sure she has a couple of laughs at me when I leave the car… not everyone enjoys why people enjoy walking through cemeteries.

By the time we returned, mama was up and dressed so we took a ride to Madison… it’s only a hop, skip and jump away. After a late lunch at my favorite restaurant, the Chop House, we checked out the antique store next door and found a nice 12-inch cast iron pan with lid. Finding lids are rare… I guess they were most often the part dropped and cracked; we never leave one behind. Whenever I lose hubby in an antique store, I can usually find him when he discovers pans…. all I have to do is follow the clanking sounds. We snuck it back in the car before mama saw, so we wouldn’t have to hear “another pan!”

Poppy Lady Marker on Hwy 83 between Madison and Monroe, GA.

Heading back to mama’s I saw a marker and hubby pulled over so I could check it out; Mama just shook her head! I was quite surprised to discover that it was the Poppy Lady; coincidence or destiny!  I’ve been on this road, Hwy 83, so many times and never noticed this marker; it’s actually placed on Moina Michael Road – a road named in her honor. I’m beginning to feel like someone is guiding me to find everything connected to the Poppy Lady, everything but her actual gravestone.

Halfway between Madison and Monroe, on Hwy 83, is a house I call The Nolan Home and I stop every year to take new photographs. I can’t remember when I first became obsessed with it, but it’s been way over ten years or more; I have a post planned soon with photographs. The original owners were from a marriage between Nolan and Bostwick. I have become so attached to this home that it resulted in me writing a fiction story about it; it’s still in the works…. one day I will complete it.

We stopped at the town cemetery of Bostwick (family members connected to the Nolan house) so I could photograph the gravestones of the Bostwick family, of whom the town was named for. Although hubby doesn’t often walk with me for photos, he never complains about a stop.

Loved the unusual gravestones in the Bostwick City Cemetery

Just a short block away, is the Bostwick Dixie Cotton Mill… a still working cotton mill. They had been out earlier picking cotton, as we found several open trailers filled of cotton… waiting to be ginned and baled. One year my son and I stopped and the owner allowed us to walk in and look at the machinery. It was quite an experience seeing how the cotton is bounced around to free the seeds from the cotton, then forced down a chute to end as a compressed bale of cotton. The man at the end told us that the bales weigh almost 500 pounds! It was an extremely hot day and not a job I would have wanted, but he wasn’t complaining… actually smiling as he talked to us. 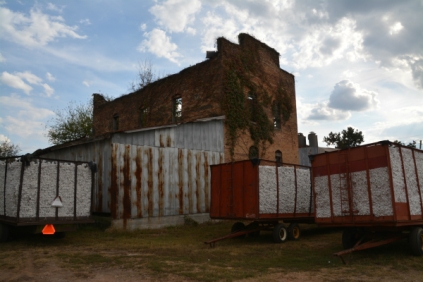 The Dixie Cotton Mill in Bostwick, Georgia with trailers of fresh picked cotton; a discard cotton machine that separates the seed from the cotton.

After dinner I settled down with my laptop to check out Day 19 of 31 Days to Better Genealogy; the topic today was to check out the site Linkpendium.com – which offers over 10 million links. Well that will keep me busy tonight in reviewing and writing my post!

To read more posts of my Vacation Genealogy trip, click on link.