Steele Creek Church is one of the first seven churches established in Mecklenburg Co., North Carolina by the Scotch-Irish settlers and where my McKinley ancestors worshipped and buried. This present day Presbyterian church, a Gothic Revival structure, was established in 1889. As you approach it off Hwy 160, your first view of the front lawn are the  mature oak trees covering the front land – they are quite impressive.

Steele Creek Road leads you to the church and cemetery and I’ve since discovered that this winding historical road was actually the stage coach route linking Salisbury, N.C. with Camden S.C; that might possibly be a clue to where my McKinley’s lived before coming to North Carolina. Hmm…. could that be a possible area to research now on my McKinley line?

The History of Steele Creek Church

Steele Creek Church derived its name from the tract of land designated for their first church, which was located alongside the headwaters of a small stream known as Steele Creek. The original 1858 wooden structure they first used for worship burned in 1888… the following year in 1889 they built the present one that I saw today. The actual bricks used to build this church was made by the congregational members from the abundance of clay found alongside the banks of Steele Creek. I did not have a chance to venture inside the church as they were setting up for a festival, but I have plans on making another trip there; going inside the church will be on my “to do list.” 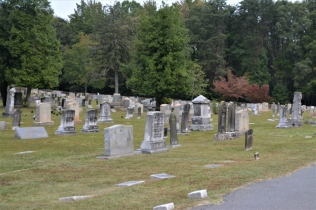 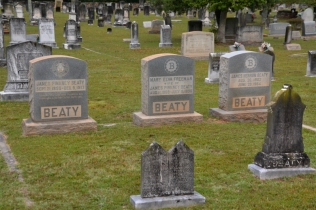 I couldn’t resist a photo of the Beaty gravestones as I do have Beaty ancestors buried there but didn’t check them out on this trip; this ensures me another trip.

There are approximately 1700 headstones in this cemetery to present, with about 200 of them dating between 1763-1820. Local artists are who we have to thank for the early carved gravestones I found, and most were crafted by the Bigham family members – the local headstone carvers. It’s said that the best of their work is actually found in this cemetery.The Bigham families lived nearby and actually donated the land which they built Steele Creek Church on; The Bigham’s operated in the area between 1765-1820.

The gravestones in their cemetery are arranged in parallel rows, all facing East. The early stones, where my ancestors are located, are in the Southern half of the cemetery and made from soapstone, granite and marble.

The stone wall, built during the antebellum period, was actually built with stones gathered by the members of the church and surrounds the cemetery; the wrought iron gates on the South and East entrances are believed to be original. This cemetery has some of the oldest graves in Mecklenburg County, N.C. – the pioneering families from the area.

Steele Creek Church and Cemetery is located about two miles off I-485; my first thoughts were why had I not stopped here before? I never knew that I was so close to this church in all the years we have driven by on our way to Georgia. Within ten minutes I was turning on Steele Creek Road and as I rounded the corner… there it was. I was quickly telling my husband to stop as we turned in so I could take photos of the church and cemetery from the street view.

I was anxious to find the McKinley gravestones, as my time was limited this morning for research; I wasn’t fully prepared in knowing exactly where their gravestones were when we arrived – what was I thinking… I wasn’t! Thankfully though, I knew that they were identified on the find-a-grave site, so I quickly pulled them up as we rode through looking at old names like Cathey, Whitesides and Beatty. In seeing those names, I thought that they must be nearby so we both got out and walked, but soon ended up back in the car – me feeling frustrated. My husband suggested to continue driving around… and what really helped was what I found on the side wall of the cemetery.

Cemetery Map Board!  WHAT A FIND!

As we drove by the outside of the side wall, I noticed a wood covered stand with a large map under plexiglass! I quickly got out to take a closer look at that map – but still not seeing my “McKinley” names. But what I did see when I looked up was a cemetery listing book carefully placed in a covered box. I pulled the book out and ran back to the car to look for my McKinley’s. There they were, right in that very area we walked, and if we had gone up the hill just a little more, I would have found them. They are buried in the oldest part of the cemetery, exactly where I thought they would be. A sign on the box which held that book read… “please do not remove“…. and I was happy that everyone had complied or it would have taken me much longer to find their graves this morning. I sure wanted that book and would have gladly bought one right on the spot to take with me, but I sadly returned it back to its original location. I was so excited in finding my McKinley’s that I forgot to look for my Beaty/Beatty gravesites, but I plan on calling the church and inquiring on the purchase of that cemetery book. 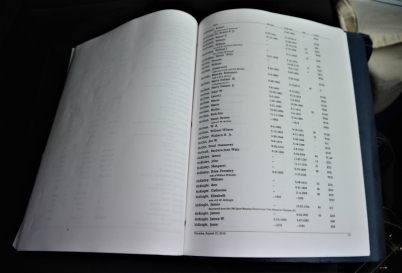 It saddened me that my William and Margaret McKinley’s gravestones are in such bad condition with moss covering their gravestones – making them very hard to read. But I was able to make out the McKinley name to identify them. I’ve since learned that if you place a thin layer of tin foil over the stone  engraved area, and press firmly in, smoothing with a sponge, you will be able to read all the words completely. I know what I’ll be packing on my next trip! 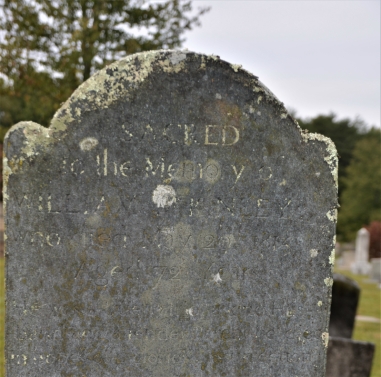 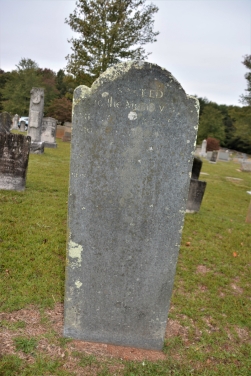 Her life was without reproach. And death we believe to her was Gain, And she left to her children the richest of all legacies A good name Why should we mourn departed friends Or shake at death’s alarms. It’s but the voice that Jesus sends to call us to his arms The Graves of all the Saints he blessed And softened every bed. Where should the dying members rest But with the dying Head Here she shall slumber in the ground Til the last trumpets joyful sound, then Burst the chains with sweet surprise And in her Savior’s image rise.

He was a true Patriot and a kind husband. A tender parent.

He died in hopes of a Glorious Resurrection.

It saddens me how the info on their gravestones can hardly be read now, so I added names and dates on my photo. Brothers John and James died within 15 days of each other – why?

After taking several photos of their graves and the surrounding area, it was time to go, but I know I’ll be back and I’ll have no trouble walking directly to their graves on that hilltop. I’ll also be armed with a list of other ancestor graves to look for, and hopefully locate. I plan on buying that cemetery book soon so I can find and photograph my other ancestors buried here, and I’ll focus more on the church… I think a peek inside is calling out to me.

In 2014 I joined the 2014: 52 Week 52 Ancestor challenge and wrote on my McKinley line coming into Georgia, if you’d like to read and see more, please click on the highlighted challenge link above. I wrote 52 stories on my ancestors during that year; those stories are on a seperate blog.

There are many researching this same McKinley line of mine from Mecklenburg County North Carolina and not one yet has found where our McKinley line came… before finding them there. The Scots-Irish settled heavily in North Carolina around the time of Margaret and William’s birth, so were they actually born there or travelled there with their parents? We have William’s parents as Robert ( 1710-1775) and Elizabeth McKinley, but we have no exact burial records on either. I haven’t looked at my McKinley’s in awhile, so I foresee a more in depth blog post soon.

If you are reading this and researching McKinley’s, please leave me a comment so we can connect, share… and work on further research together.