The Haunting of Lizzie Stargel Gooch

The Haunting of Lizzie Gooch

In visiting the mountain town of Dahlonega, Georgia – I visited the grave of Lizzie ……. a place of where my Bryan ancestors settled in Georgia and called home since around 1831… first living in Franklin and Habersham counties.

Dahlonega is a town enriched with history…. history of the site of the first gold rush in Georgia and still one of the most popular mountain towns today to visit.

What caught my eye on a day several years ago as we walked around Dahlonega was the poster in the bookstore – anything haunted always intrigues me… and I’m sure I beat everyone inside! As I purchased the book “Dahlonega Haunts”, the author, Amy Blackmarr, asked me why was I in town. I explained my ancestry line and that I was headed out to Cane Creek Church cemetery – her eyes lit up! “Are you related to Lizzie Gooch” she asked. “Lizzie is in my book!”

After our conversation, I couldn’t wait to arrive at the cemetery and find Lizzie’s grave; secretly hoping to make contact with her. Lizzie is my 1st cousin, 3x removed, and the granddaughter of my 3rd great grandfather – Berrian Clark Bryan (1823-1923).

I’m sure I was the first one out of the car in arriving at the cemetery!

As I stood by Lizzie’s grave, I noticed a small stone next to her that only read “Infant Gooch” – and I wondered – now who is this? In as much as I was hoping for a “sign”, nothing out of the normal happened, but later on… well that was a different story. 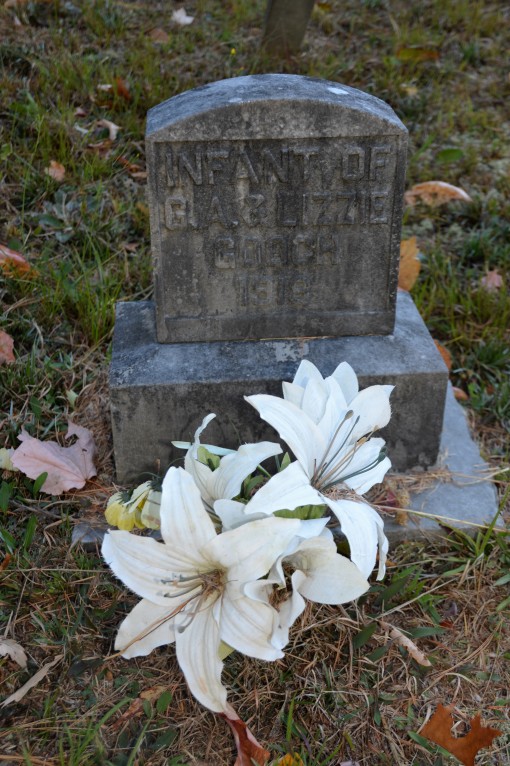 But before that story – let me give you a little more info on Lizzie!

Lizzie (Sarah Elizabeth Stargel) was born on August 17, 1892 at Cane Creek, Lumpkin Co., Georgia to parents Sarah Elizabeth Bryan and Richard Remington Stargel; she was one of 9 children in this Stargel family. On September 30, 1917, Lizzie turned 25 years old and it was her wedding day – she married Garland Andrew Gooch – who also is related to me – my 2nd cousin, 3 x removed. So it seems I am related to both of them. Garland shares my 4th great grandfather, Tillman Gooch, and further back to William W. Gooch (6th gr. grandfather) of Caswell Co., N.C.

The more I delved into Lizzie’s past, the more I realized that on my walk to discover the “Bryan” lands, which once belonged to Berrian Clark Bryan, I had walked in Lizzie’s shoes – literally! On that walk-in, I was with the grandson of Lizzie’s brother John Jones Stargel, married to Georgia Jones. But what was most important on this walk was that B.C. Bryan’s great granddaughter, Ila Stargel Jones-Sewell, who was also with us that day – at age 97. She didn’t make that mile-plus walk into the cabin site, but remained in the car with my mother and her daughter in law. Ila was still very vibrant of knowledge and without her, we would probably never have found this site; she had always insisted that she would remember where it was.

The walk in to Berrian Clark Bryan’s cabin site was featured in the local Dahlonega newspaper, but because of the photos I took inside Cane Creek Church…. ghostly images seem to have appeared in my photos on that day. I’ve taken photos inside the church on many occasions, but it was only that day – that they appeared.

Ila would have been about 15 years old when Lizzie died,and living in such close proximity of their cabin, she definitely knew her – and knew her well! If only I could talk to Ila as I once did, I would learn much more on Lizzie. Ila had a phenomenal mind still at age 93 in 1997, when she first wrote me letters filled with family stories and history; in 2014 I blogged a previously written story, “I Met Ila on a Georgia Backroad.”

Within a few short months of marriage, Lizzie was pregnant with their first child, but on November 19, 1918, Lizzie lost her life, along with her infant. The infant was never identified as male or female, just “Infant Gooch” on the gravestone; how sad that the baby wasn’t identified or named. Could it have been that the baby wasn’t full-term – maybe why no name or sex given?

In Amy’s book, “Dahlonega Haunts” she mentions visiting Lizzie’s grave and making contact with her by use of a recorder; in playing back the tape later… after a moment of silence, she heard faint, but clear… the sound of a woman’s voice singing low. More questions were asked, with still more music heard. Amy returned once again on a frigid winter nite after midnight and again stood at Lizzie’s grave recording questions and later singing hymns to her. After returning home, and listening to the recording of her singing Amazing Grace at the graveside, Amy heard another voice of a woman distantly in the background……. she was convinced that Lizzie was singing along with her. And if I heard that, I’m sure I would have heard the same thing.

The only mention of Lizzie found in the Dahlonega Nugget. It puzzled me as to such a small obit – and her younger sister’s obit  below being so lengthy. 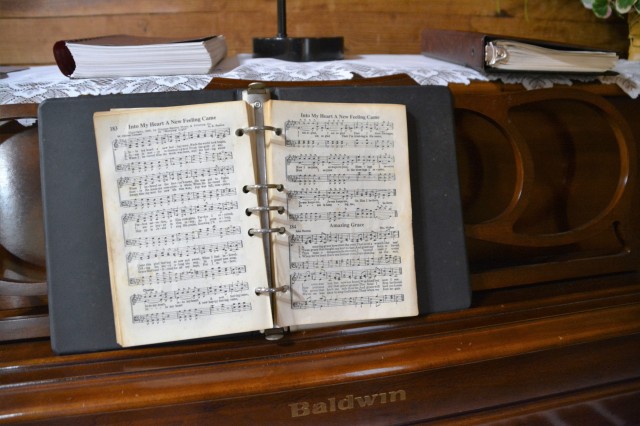 I re-read the story on Lizzie upon returning home and when I looked at this photo of the open hymn book on the piano – Amazing Grace showed! That was the last song that Amy Blackmarr sang to Lizzie – and in the recording, Amy heard another voice in the background singing along with her. Is this a sign that Lizzie knew I was there… as I had visited the church after visiting Lizzie!

On the other side of the Infant Gooch grave sits the grave of Tinta Malinda Stargel – Lizzie’s sister, who died on the morning of April 20th, 1898, at the young age of 14, ten months and ten days. Tinta suffered extremely with illness for four days before she died… telling her sister to place the flowers in her room at her grave.

But let’s return back to my somewhat paranormal experience….

Whether you believe or disbelieve…

We arrived back to my mother’s later that day who lives about 1 1/2 hours outside of Dahlonega. As everyone settled into watching TV, I sat down to read my book – Dahlonega Haunts. I felt somewhat disturbed that Halloween eve night also, as my daughter was in Fall River, MA. spending the night in Lizzie Borden’s home – how ironic – two Lizzie’s strongly weighed on my mind that evening.

Finally after settling down, I began to read Lizzie’s story as my cellphone rested on my leg; my intentions were to call my daughter upon reading the story. I wasn’t even halfway down the first page, when the lights on my phone began to light,  flashing orange and green. I stopped to look at my phone – no one was calling, but I opened it anyway – the line was dead! I closed my flip phone. Not saying anything to anyone, I continued to read…. and …. the lights began to flash once again. That was when I closed the book and just sat there, wondering.

My son came in the room and asked what was wrong, so I proceeded to tell him. He took the book, my phone, and began to read – nothing happened for him. His wife left the room and hopped in bed with my mother – she wasn’t having of our experiences – she was spooked.

I took the book and my phone back and again opened to read, but if Lizzie had been here with me before, trying to make contac… she was now gone. I felt disappointed, as I probably would have tried to question her at that point.

Remembering that my daughter was at Lizzie Borden’s house that night – I thought that maybe my Lizzie was contacting me to tell me something was happening with the other Lizzie. I was beginning to feel just a little spooked now, and quickly called her – wanting to make sure that I was wrong. I felt quite relieved when she answered her phone…. and I heard her voice. She had not experienced anything in that Lizzie’s house.

I do feel Lizzie tried to contact me that evening, why…. I’m still not sure. Did she want to just tell me “thank you” for visiting, or was she trying to tell me something. Well at this point, I’ll never know.

While in Georgia recently, I took another trip to Dahlonega and Cane Creek Cemetery to say hello to Lizzie and Berrian Clark Bryan. I experienced nothing other than always feeling like “someone” watches me while there.

Cane Creek Cemetery is located almost a mile down a one-way road into the mountains – ending in a circle of trees, which surrounds the cemetery and the church. It’s a little spooky being back there, as there is no other way out, unless you want to try and walk out through the woods down the backside of the mountain. Actually Berrian’s cabin is just down that very mountain of trees and long ago there was a walking path; they traveled that path back and forth to school and church.

The first time my cousin took me to this cemetery, the road was a red dirt muddy road, and my thoughts were… if we slide off in the deep ditches, we are done! Upon arriving that day at the church, I saw an old logging truck sitting off to the side. While I didn’t say it outloud – I thought to myself, if those loggers have plans for us – no one will ever know! Lucky for us, they left after eating their lunch; why did they come all this way on a muddy dirt road to eat lunch?

Lizzie, wherever you are, may you and your infant Rest in Peace…. and be assured that I will come to visit and say hello again… and I will be hoping for a sign from you… !

1 Response to The Haunting of Lizzie Stargel Gooch