I’m taking Amy Crow’s challenge for 31 Days to Better Genealogy and blog Amy’s questions, with my answers; I plan to make one blog post, adding daily. Hopefully by the end of the 31 days, I will learn how to better solve some of my genealogy questions. If you haven’t signed up yet, just click on the link below… never too late to catch up!

This is a new topic to me – Amy is incorporating our genealogy and location of ancestors into our To Do today. I find it valuable and interesting in knowing the area of which my ancestors lived as it gives much insight into their lives; the study of the location brings our work full circle. I did not find a “Place Study” on Dahlonega, Georgia so I’m writing a short “place study” on the area.

From Wikipedia:One-place studies are a branch of family history and/or local history with  a focus on the entire population of a single road, village or community, not just a single, geographically dispersed family line.

Dahlonega lies at the foot of the Appalachians in Lumpkin County – once home to the Cherokee Indians. Very little is known before the early 1800’s – as before the white settlers moved into the area, it was totally inhabited by the Cherokees. The name Dahlonega was first known as “Ta-lo-Ne-Ga”, which means yellow and possibly referred to “yellow gold” in the Cherokee language… or was it more referenced to the colors that fall in the north Georgia mountains in the fall or the other “yello” that caused prospectors to swarm into the area when gold was discovered in 1828; it probably referenced to them both.

The gold discovery in 1828 by Benjamin Parks near the Chestatee River soon created a population explosion of new settlers to the area. 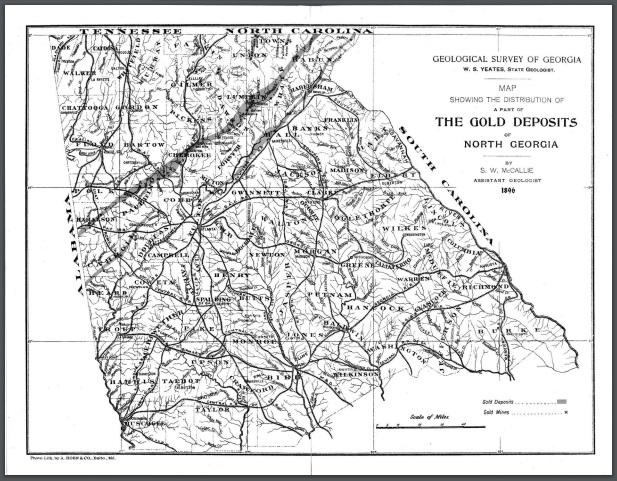 Chestnut, White Oak and Hickory trees predominately made up the Cherokee forest – and they were the logs that built the cabins in early Dahlonega. Dwellings in this area around 1830 when my ancestors began arriving were log cabins made from those very trees. Sawmills began popping up due to the supply of timber, but the removal of the trees quickly changed the forest landscape. Both whites and Cherokees built grist mills alongside the many streams abundant in the area. The Cherokees soon began grinding their corn vs the pounding in the mortar, which was once their way; a way they had done for generations.

Even as early as 1831, roads were being cut through the Cherokee nation with their permission. The government began cutting wagon roads – not exceeding 60 feet in width. The roads were needed to connect the outreach settlements of Tennessee and to lead a way down to Savannah. The Cherokee’s took advantage of those opportunities and built inns and stands along those roads; many became wealthy entrepreneurs from the road known as the Federal Road.

Around 1831, my Bryan ancestors moved into this area from previous Franklin and Habersham counties. County lines changed over the years as new counties formed, so it may not have been a move or a big move. If they did move, did they come also for the gold? I have no family stories of any of my direct lines mining for gold, but one of my great aunts supposedly had gold buried in their home.

In 1833, Dahlonega was incorporated as a town –  previously known as just a community named Licklog; it soon was chosen as the county seat of Lumpkin County and a log courthouse was built on the town square.

Upon the arrival of the new white settlers to these mountain lands, a change took place and the town of “Dahlonega” became the new area for anyone wanting to make their fortune in gold; Lumpkin County spread out to cover over 300 square miles.

Dahlonega became such an explosive area for gold mining that the government decided to build a branch of the U.S. Mint there in 1835. It was often said that after big rains, men could even be seen panning for gold in puddles on the town streets.

The discovery of gold ended the life of the Cherokees!

The Cherokees called western Georgia home for years and continued to call the Cherokee Nation home until about 1829. Just one year later in 1830, Congress passed the “Indian Removal Act” – although many Americans were against the act, including the notably Tennessee Congressman Davy Crockett. 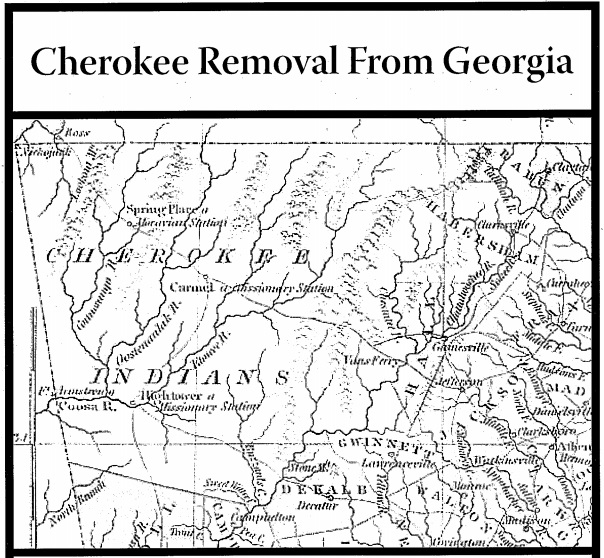 In 1838, the United States invaded the Cherokee Nation, and in one of the saddest of times in history, the Cherokee men, women and children were herded like cattle…from their lands. They were removed to new lands in the state of Oklahoma – a journey known as “The Trail of Tears.”

The outbreak of the Civil War in 1861 brought many changes to the area – the most important one was the closing of the United States Mint. The building was later turned over to the North Georgia College – which still remains today and sits alongside Dahlonega.

Two of the most important gold mines in Dahlonega were the Consolidated and the Crisson mines on Highway US-19. The Consolidated was the largest mining operation in the area, but it went bankrupt in 1908. The Crisson mine is still active and actually supplied the gold for the gilding of the Georgia State Capitol Dome in 1958. Both mines continue to offer panning tourist activities and the Consolidated give tours through their abandoned mine shafts. I took that tour one year with my son and while I was hesitant at first, it was interesting to walk in the footsteps of the miners. The temperature remains a constant 60 degrees most times. We were entertained on that day by one of the pets lingering on the ceiling – bats are a constant attraction in the mine – just minding their own business. As we walked by a spring, I noticed how green it looked and was told the color was reflected by the temperature there being so cold. Then we were told to stand perfectly still, and we would be shown how dark it would be with no lights on. It was pitch dark – so dark that you couldn’t even see your own hands in front of your face – no matter how close you put them. That was scary! Remind me next time to carry my own flashlight.

The town of Dahlonega built up around that original log courthouse, but later rebuilt in brick and mortar; it still stands today on the center square, and houses the Gold Museum – which tells the story of the gold rush in Dahlonega. 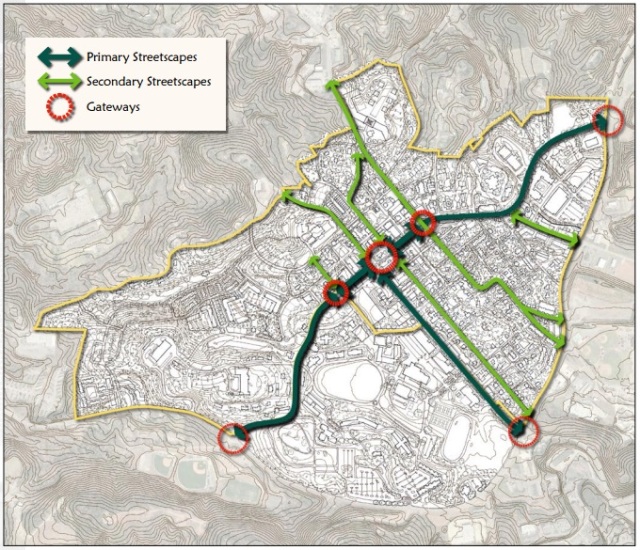 The town square in the center circle – the community built around the square.

The Dahlonega community worked hard through the years to preserve their town and its history by preserving the historic buildings and incorporating them into rebuilding the town. That is what has made it the tourist attraction it is today; locals flock there on weekends to shop, eat, drink and relax in this quaint mountain town.

The largest waterways in Lumpkin County are the Chestatee River, which rises high in the Blue Ridge Mountains and flows down through Lumpkin to empty into the Chattahoochee River. The Yahoola and Cane Creek are two of the main creeks; the Yahoola had the largest population as a gold-mining stream and many gold mines lay alongside its banks.

Cane Creek, of which my ancestor Berrian Clark Bryan’s cabin sat alongside, flows southward along the base of Radar Ridge – it also empties into the Chestatee River.

In reading history on the area, I stopped on the name of John McPherson Berrian, the Attorney General of the U.S. – the name Berrian intrigued me as my ancestor was named Berrian Clark Bryan. I’ve yet to see that name in many places and have wondered if he was named by using a maiden name – which was often done. (I will research this later)

The beginning of the Appalachian Trail, just outside of Dahlonega, begins on Springer Mountain and runs up to Mount Katahdin in Maine – 2,168 miles. One of my cemetery searches took me to Hickory Flats Cemetery and as I walked around I noticed a marker on the side of the cemetery that told me the Appalachian Trail began there on the side of the cemetery. (I need to make a return trip to that cemetery)

My first trip to Dahlonega led me to meet the Postmaster, also the local historian. As he viewed my family group sheets, he promptly told me that his family lines connected with mine, plus my family names connect to most of the families in the  Dahlonega area. Maybe that’s why I feel so “at home” when I visit. It was from that visit and all he shared with me… which gave me my start… and then I was hooked! 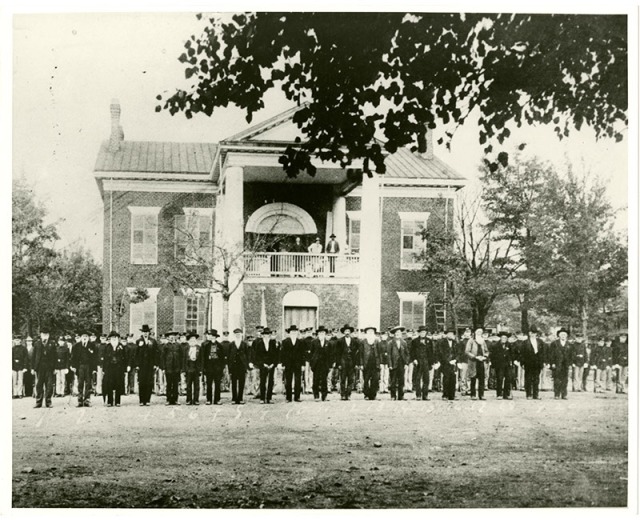 The Dahlonega Courthouse in 1909 and a gathering of the Civil War Confederate Veterans receiving the Southern Cross Medal! Berrian Clark Bryan # 15