Breaking down the wall to find Sgt. John P. Wilson came with a double “Wow”! Not only did I break through one wall, but another right behind it tumbled down also; Double Wow!

My break-though came  after following a leaf hint on Ancestry. It pays to rummage through those leafs; I think I paid more attention when they were “shaking.” On this day I wasn’t searching for him, but the Wilson name popped up with clues – that set me on a hunt.

Having such common names as John and Mary often lead to brick-walls! After all, how do you decipher who’s “John and Mary” is who’s? Why do I have so many ancestor’s with common names, couldn’t I have a few oddball names to make the search a little easier?

The first leaf on John P. Wilson led me to a family that fit to a “T.” John was about the right age with a wife of Mary E. (which was new to me), and a daughter Alma E, which also fit in the right time frame. There was even a brother James – which had been mentioned in the family as a name, but never documented anywhere. I was excited, and began tracing them through the census, when… bang! I looked at the 1930 and 1940 census, Alma was still living home. I knew at that point… I had the wrong family. Why… How… could the family I was searching with have exact names be so almost right, but be so wrong?

Often as I work, I try to look at the entire page in its entirety; move too fast and you often will miss that tiny clue that’s often right in front of your eyes. And that’s exactly what would have happened, if I had left that wrong page I was on.

As I sat there staring at the screen, knowing this family was the completely wrong family – I looked off to the right where there are other suggestions and there was a link to a Sgt. John P. Wilson. I clicked on it, taking me to find-a-grave, and I knew right away… here was my John… and he was not alone. His wife, Mary Elizabeth, and the one daughter, my great grandmother, Alma Wilson was there – with the correct date of death.

As I sat there reading line by line, going back and forth to Ancestry on the links provided, I knew I had just opened up more than two generations as John’s parents were listed with links to their find-a-grave sites. It will take more than one post to complete my brick-wall breakthroughs.

The first account of finding my John P. Wilson in the census is on the 1850 Alexander Co., North Carolina census. He is listed with parents Robert C. Wilson and Jemima (Hines) and one of ten siblings:

Did John really desert and enlist again? Is that even possible? Wouldn’t they have arrested him when he tried to re-enlist? Why was his rank at enlistment listed as “sergeant”?

So many questions – with No answers!

I’ve never heard of anyone enlisting with a higher rank other than private, unless they previously  were in service. Another thing I question is the Service Record; it states he was promoted to full private – was he demoted from sergeant? I probably will never understand this record!

In 1861 John P. Wilson marries Mary Elizabeth Day (date from 1900 census); I have not yet found a marriage record to confirm a maiden name, but did find the surname of “Day” on several Wilson Ancestry trees and on two of their children’s social security applications their mother was written as Mary Day. No parents have been found for Mary, but I have found possibilities that will have to be researched.

John P. Wilson (42) and Mary (35) made home in Alpharetta, Milton Co., N.C. by 1880 and there were now five children in the family. Mary’s parents were listed as both born in S.C. – this is the first time I have seen them listed in South Carolina, as other census show GA.

The occupation of John P. was written as farmer, but in studying the census I see it as “tanner” – which fits more with the other census years. Often you need to view the census yourself as the written transcriptions are what the transcriber took it as – and not always correct. All children attended school except for Thomas and Joel; good to see that their children went to school, learning to read and write, as so many were required to work on the farm instead of attending school. In the 1870 census it states John R. L. and Laura were born in N.C., but here it’s noted they were both born in Virginia. Could he have left N.C. after the war, for work in Virginia as a tanner; it seems he moved around quite a bit for work in his occupation of tanner.

1900: John P. Wilson (64) and Mary E. (56) are now living in Dixon, Cherokee Co., Alabama; only two children remain in household. Mary now lists her parents as both born in Georgia, and she herself born in Georgia. John’s occupation is listed as farmer and rents a farm. It is on this census that it’s asked how many years they have been married – they both list 39, which is where I based my original marriage date of 1861. Also noted was that there were 9 children in family, but as of 1900, only 7 were living. I have only found 6 children listed through the census years.

The one most important mistake on this 1900 census was when the enumerator wrote the birth year as 1864 – and the next box of age was written 36. His birth year was 1836 and his age was now 64. That is a huge mistake – my first quick look at this census was – this can’t be my family, but I took the time to scrutinize it and quickly figured out the mistake. I left a note on the mistake in the comment section and wrote Ancestry asking for a correction. Alma’s name was written as Almer M; there names were written as to how the census enumerator interpreted the pronunciation, especially if it couldn’t be spelled for them. The middle M. looks like it could either be read as M or W. Many of the other census’s show the letter E for Edith.

John P. Wilson is found as a widower on the 1910 census of Fulton Co., GA. and listed as an inmate in the Confederate Soldiers Home of Georgia at 410 E. Confederate Ave. The home was located in Edgewood – just outside of Atlanta. I immediately questioned the word “inmate” and thought he possibly was there for treason or desertion, but further reading told me that is what they called all veterans who lived in these homes.

The Confederate Soldier’s Home of Georgia was established in the year of 1889 for the protection and care of the Georgia Veterans from the Civil War. The land on Confederate Avenue, just out of the Atlanta city limits, was purchased by the help of newspaper editor Henry Grady. A Gothic style home was built to house the residents, but did not open until 1901 due to a lack of funds. The state of Georgia eventually had to step in and purchase the property to finally speed up the opening of 1901. It wasn’t long after opening, on September 27th of the same year, that a fire completely destroyed the Confederate Soldier’s home. It was rebuilt the following year and re -opened with 68 rooms. 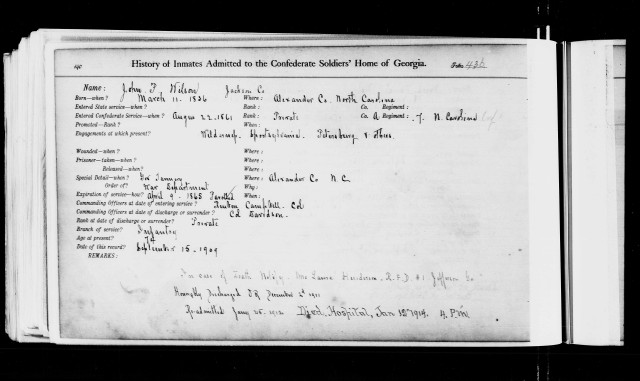 History of Inmates Admitted to the Confederate Soldiers’ Home of Georgia

John P. Wilson is listed on pg. 190 with information of… birth date March 11, 1836, born in Alexander Co., N.C. – enlisted in Confederate service on Aug. 22, 1861 as a private. Engagements at which present were Wilderness, Spotsylvania, Petersburg and “others.” (I will write more on his Civil War History in another post.) His expiration of service was listed as April 9, 1865 – and listed as paroled. Col. Campbell and Col. Davidson were present at discharge; also noted he was a private at discharge.

This finding left me with more questions of… When did he return to GA.? Where was his family? What does this middle initial of “P” stand for? Was he sick and needed more care at age 74? When did Mary Elizabeth die? Where is she buried? I have yet to find anyone with a death date or a burial site for her.

Notation on bottom of page mentions… In case of death notify Mrs. Laura Henderson, RFD #1, Jefferson, GA. – Honorably Discharged OR Deserted? 2nd 1911? Re-Admitted Jan. 25, 1912… Died Hospital, January 12, 1914, 4 p.m. (Laura Henderson is the daughter of John P. Wilson; I have not completely settled on the name Deserted as of this post. I also have wondered if they wrote December, showing he left and then re-admitted in 1912)

John T. (P) Wilson, aged 77 years, died Monday afternoon at 3:30 o’clock at the Confederate Soldiers Home. The body was taken to Harry G. Poole’s Chapel, and funeral arrangements will be announced later. (The wrong middle initial was listed in this obit announcement)

In searching for information on Harry G. Poole’s Chapel, I found several members on Ancestry on the message boards mentioning this funeral chapel, which was a funeral home. It was sold many years later and no records have been found at this time. 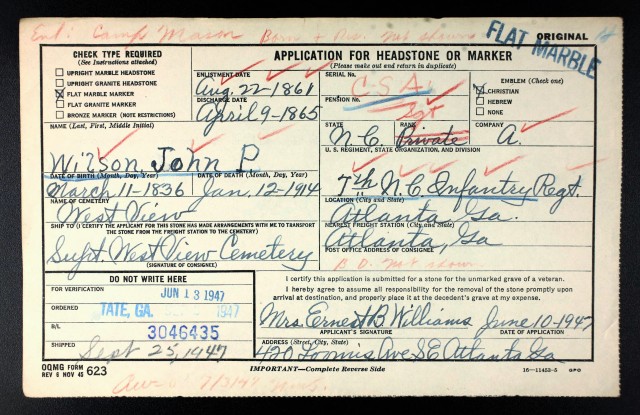 The United States Headstone Application for Military Veterans gave me the information of where he was buried – Westview Cemetery, Atlanta, GA. I’m assuming he had no stone until this one was ordered on June 10, 1947 by Mrs. Ernest B. Williams, 420 Loomis Ave. S. E. Atlanta, Ga. (I have not located which family member she is from at this posting – I searched the Atlanta city directory but didn’t locate her) The rank was first written as private, but then crossed off and Sargent written. I am assuming, that at this point, they finally knew the correct rank from his military records, so I’m going with Sargent after finding this record.

Westview Cemetery, established in 1884, was the original site of a portion of the Battle of Ezra Church, a famous Civil War battle in Atlanta.

The Confederate Memorial in WestView Cemetery was erected by The Confederate Veterans Association of Fulton County. The monument is a stone soldier holding a flag, with small cannonballs below. Two Cohorn mortars lie just beyond a circle of Confederate graves, which marks a path that leads to the monument. 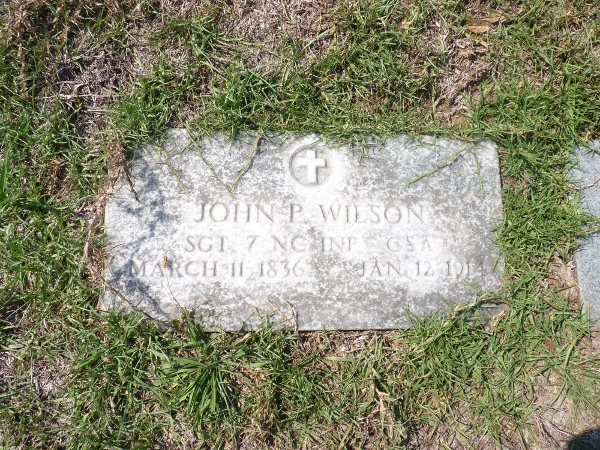