Roger Sherman: Signer of the Declaration of the Independence

Roger Sherman – Signer of the Declaration of the Independence

It was  Heather Wilkinson Rojo  idea of a Fourth of July post on signers of the Declaration of the Independence that challenged me to search my state (Connecticut) for signers, and I found one buried in my home town of New Haven, Connecticut – Roger Sherman. 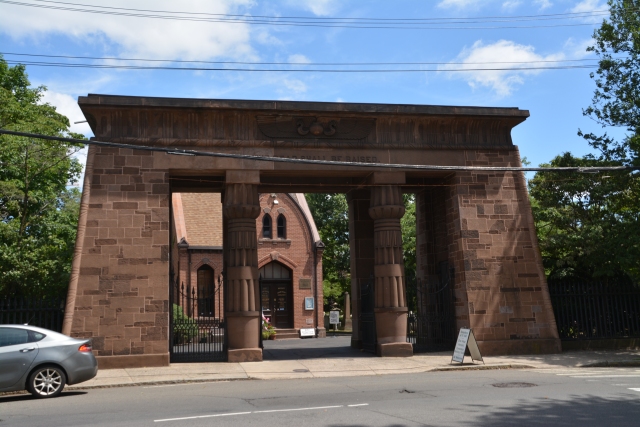 My husband and I visited Roger Sherman’s grave-site at Oak Grove Cemetery, just behind Yale University. I also came across a few more interesting graves while there and will post them at another time; a return trip is needed for more information and photos. 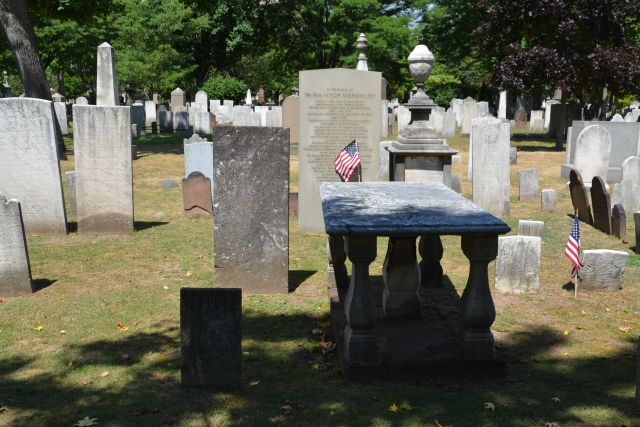 Original gravestone was the tablet

Gravestone placed by the descendants of Roger Sherman

Sherman was born in 1721, Newton, Massachusetts, to William and Mehetable Sherman; he was one of seven siblings born to this family. Roger’s father farmed to provide for his family, but he also provided access to a good library for his children, which Roger took full advantage of as he enjoyed learning. Besides his farming chores, he learned the trade of a cobbler, but his desire to read and learn always kept him with his father’s many books in hand. His schooling consisted of only attending a common school as no higher education could be afforded to him.

In 1743, Roger’s life took a turn due to his father’s death. He moved with his mother and siblings to New Milford, Connecticut and began a partnership with his brother William; they opened the town’s first general store. He joined in quickly with civil and religious affairs and soon became a leading citizen of his new hometown, which resulted in him becoming town clerk.

Roger Sherman married twice, first to Elizabeth Hartwell on 17 Nov 1749; they had seven children before she died in 1760. He remarried three years later to Rebecca Prescott on May 12, 1763 and had eight children; only thirteen reached adulthood from his two families.

Having no formal legal education, Sherman was admitted to the bar in 1754 and embarked upon a distinguished long judicial and political career. In 1761, Sherman abandoned his law practice, and moved to New Haven, CT. where he managed two stores, one that catered to Yale students, and another in nearby Wallingford. Roger had strong associations with Yale and soon became a friend and benefactor of Yale College, serving for many years as its treasurer.

In 1765 an honorary Master of Arts degree was bestowed to Sherman. Roger being mostly self-taught, was full of knowledge, and wrote and published almanacs yearly that included information on astronomy, religion and weather.

It seems he was held in high regard by many, as Thomas Jefferson described Sherman as “a man who never said a foolish thing in his life” and John Adams view was that he was “one of the most sensible men in the world.” Sounds like we could sure use him in politics today!

Sherman quickly became active in “politics” and the colonies struggle for independence from the British rule, which was very strong in New Haven. During the years of 1774-1781 and 1783-1784 he served in the Continental Congress and it was at that time when he helped to write the Declaration of Independence and the Articles of Confederation; Sherman also signed the Continental Association, which created the trade boycott with Great Britain.

Roger Sherman was the only man to sign all four great state papers of the United States; the Continental Association, the Declaration of Independence, the Articles of Confederation and the Constitution.

In 1784, Sherman took on the role of mayor in New Haven and served until his death in 1793. Also during that time, he was elected to the U. S. House of Representatives, where he served from 1789 until 1791. Roger soon became a Connecticut Senator after a serving senator died – a seat he held until his death; he died in his sleep on July 23, 1793, after suffering from a two-month illness of typhoid fever.

Roger Sherman was buried in the New Haven Green cemetery originally, but in 1821 all buried on the green were relocated; his remains was moved to the Grove Street Cemetery. The green had become cluttered with gravestones and after three church’s were built on the green, they thought it better to remove them to another location; it was found to be cheaper to move them vs building a stone wall to enclose them.

Places and things named in honor of Roger Sherman

Words etched on the gravestone of Roger Sherman

In memory of
THE HON. ROGER SHERMAN, ESQ,
Mayor of the city of New-Haven,
and Senator of the United States.
He was born at Newton, in Massachusetts,
April 19th, 1721,
And died in -New-Haven, July 23d, A, D. 1793,
aged LXXII.
Possessed of a strong, clear, penetrating mind,
and singular perseverance,
he became the self-taught scholar,
eminent for jurisprudence and policy.
He was nineteen years an assistant,
and twenty-three years a judge of the superior court,
in high reputation.
He was a Delegate in the first Congress,
signed the glorious act of Independence,
and many years displayed superior talents and ability
in the national legislature.
He was a member of the general convention,
approved the federal constitution,
And served his country with fidelity and honour,
in the House of Representatives,
and in the Senate of the United States.
He was a man of approved integrity;
a cool, discerning Judge;
a prudent, sagacious Politician;
a true, faithful, and firm Patriot.
He ever adorned
the profession of Christianity
which he made in youth;
and distinguished through life
for public usefulness,
died in the prospect of a blessed immortality.

My blog is at: https://everyonehasafamilystorytotell.wordpress.com/
View all posts by Jeanne Bryan Insalaco →
This entry was posted in Connecticut History, Daily Writings and funnies... and tagged New Haven Ct., Oak Grove Cemetery, Roger Sherman, Signer of Declaration of the Independence. Bookmark the permalink.

5 Responses to Roger Sherman: Signer of the Declaration of the Independence