Amusing Whimsical Stories: from my childhood

Amusing Whimsical Stories: from my childhood

This memory had been filed away until a recent conversation with mama one night and she said, “remember when you and Janet used to walk to town with Harvey?” After much thought, memories of that imaginary friend slowly flowed back. Isn’t it odd, how some memories fade to other areas in the great thing we call a “brain.” And then along comes a trigger to revive those memories, which were waiting to be rediscovered. I bet, if you think really hard, you have memories waiting to surface and surprise you.

There is no power like the power of imagination and I think I was blessed!

I’ve always loved tub baths as a child – I could sit for hours in the tub playing with invisible friends that swam in the tub; I was quite young when I played-out those fantasies. Mama remembers standing outside the door listening to me talk to them – and shaking her head! My fingers dived and swam around and had conversations with each other – who only knows what those conversations were about or even why. I did outgrow that!

Only to later discover other friends…

Often after school, as a teenager, I walked to town – closer than walking home – and more fun. My mother worked at Clara’s Beauty Shop on Carroll Street in Perry, Georgia;  that was where you could hear all the gossip – between those four walls; it was also where you could be treated to awesome yummy delights if it was Christmas. It was a place to park my schoolbooks and pick up some spending money and continue on down to one of the local drugstore fountain counters. 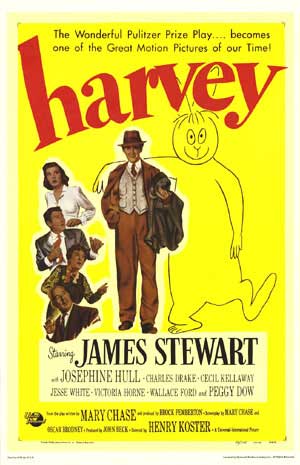 It drove my mother crazy when Janet and I stopped with “Harvey” – our imaginary friend who we often took to the soda counter with us. I was probably around thirteen or younger, still attending Perry Junior High school nearby. Harvey was not a person – he was a rabbit! Picture the two of us girls, walking down the sidewalk – hands stretched out and swinging between us – as if we were holding someones hand. Harvey was not a small rabbit either, he stood tall at six feet, three-and-a-half -inches; he definitely wasn’t a slouch. Two silly girls giggling and skipping down the sidewalk – and Harvey was happy to hop right alongside of us!  I’m sure heads turned – and heads shook at us silly girls!

Harvey loved accommodating us to the fountain counter and even had his own stool – where else, but right between us. Hmm, wonder if I ordered him a drink? Our afternoon special was always smashed toast and a cherry coke! What’s smashed toast you ask? Nothing weird, just buttered bread, toasted on the grill, and smashed down really flat and crispy; oh boy was it tasty; nothing better than a real cherry coke served fountain style. I can close my eyes and almost taste that toast – I’m going to have to take a stroll down memory lane and recreate that in my kitchen!

On the days we brought Harvey to town, he went everywhere we went. First agenda was always food…. shopping came next. Comic books were a high priority for me during those years and if I had saved them, I would be reading Archie, Cecil the Sea Serpent, Richie Rich, Casper and Little Nancy. Quite a bubblegum assortment of reads! After comic books were just read or purchased, we hopped over to the local clothing store Tot’s N Teen’s; they had the best choice of jeans in every color! Good think Harvey didn’t need clothing, as jeans for him would have been way out of my budget!

The movie, Harvey, opened in 1950 – two years before I was born, so I wonder when I first watched it? I have no actual memory of watching it in my early years, but I have to assume I did; probably in the early sixties. How else would we have gotten that idea? 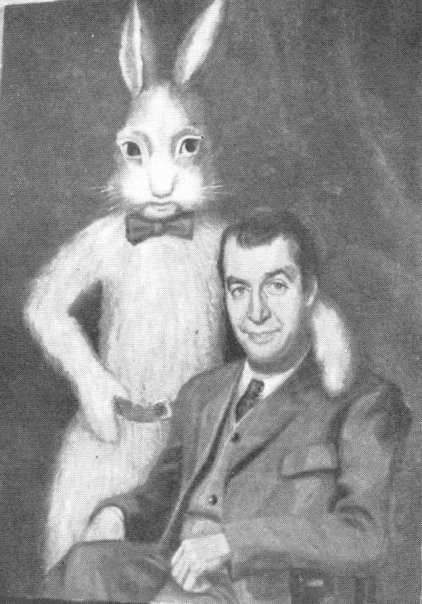 If you’ve never seen the movie “Harvey” then I strongly suggest you give it a whirl – you won’t be disappointed! If you’re wondering what is Harvey and what did he look like…. well Harvey was an invisible rabbit and friend of Elwood P. Dowd, played by James Stewart. He’s considered a “pooka” – a mischievous creature from the writings of Celtic Mythology. I’ve always been intrigued by mythology, so maybe that brought about my attraction to Harvey. Anytime a teacher gave assignments to write on mythology, I never complained – it was intriguing to read those stories and imagine.

A “Pooka” is said to be a spirit or ghost and can bring both good and bad to its human accompaniment. Its form can also be a creature known as a shape changer – taking the image of certain animals like horses, goats, rabbits, or even human-like with animal features. I’m sure my attachment to “Harvey” made my mother question my sanity; hopefully she realized we were only teasing. We did get a few eyebrows raised  by locals as we strolled down the sidewalk. Daddy was lucky we never borrowed a hat for Harvey and cut holes to accommodate his ears. He did have long pointy ears – and you know they’d never squash down under a hat, they have had to be free! Mama would have probably warmed my backside if I’d taken it that far, or she might have laughed since it wasn’t her hat. She was the disciplinary of the house; daddy didn’t make me feel afraid, but if mama threatened me with that Southern “switch” – I packed up my hi-jinks and moved on to safer ground.

By the time high school rolled around, I somehow progressed to reading and fantasizing about witches. How did that come about? Well, that memory hasn’t evolved back yet, but I wish I had saved the paper I wrote – it sure puzzled my teacher. My essay paper was on “white” witches and I strongly suggested my beliefs to my teacher. White witches were the good witches vs the bad witches. My mother might have been called on that paper – but I do remember standing my ground with the teacher insisting I was one of the good witches.  I was quite headstrong when it came to voicing my opinions!

From all the stories mama has told me about her imagination and escapades- it’s  her I can “Thank” for for my whimsical ideas and adventures.

My blog is at: https://everyonehasafamilystorytotell.wordpress.com/
View all posts by Jeanne Bryan Insalaco →
This entry was posted in Daily Writings and funnies..., Family Stories and tagged Harvey, imaginary friends, Perry Georgia, rabbit. Bookmark the permalink.