The Blogging from A to Z challenge is to post everyday during the month of April 2016, except Sunday. I will start with the letter A and hopefully make it all  the way to Z. I hope you enjoy the read! 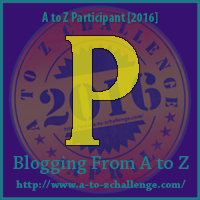 Ok, here comes another favorite letter. Let’s start with Pecan Pie for “P” – and it’s best made with mama’s Georgia pecans. Did you guess pecan pie? I don’t remember if I ate pecan pie as a child, but I know it was never made in my house, but it sure is definitely a favorite of mine now!

My favorite recipe comes from Miss Mildred Warren’s cookbook; she wrote a cooking section in the Perry Houston Home Journal newspaper called The Cook’s Nook. Later she published a cookbook with many of those recipes published over the years. I found many favorites In her cookbook – and that’s where my pecan pie recipe is from. I have tried other recipes, but I always return to my old favorite. Maybe it’s because of the light corn syrup the recipe calls for – some call for dark corn syrup. 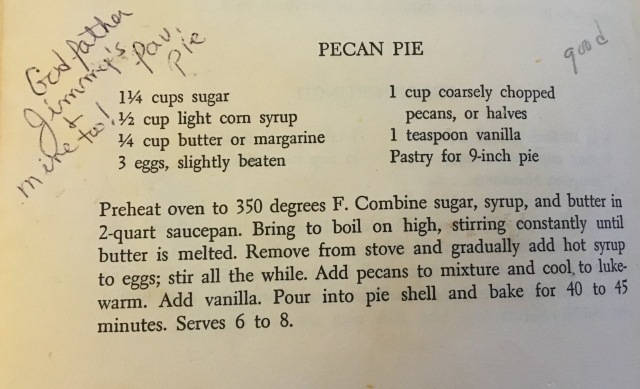 Peanuts in Georgia are a big deal – I discussed my boiled peanuts earlier, but did you know that peanuts grow under the earth on the roots of the plants? It was fun picking them off the roots after the plants were pulled up – they were raw and green. I can still see a big heap of plants and roots all piled in a big heap under granddaddy Bryan’s car shed; they needed to dry before picking off the roots. And never eat green peanuts – unless you enjoy a bellyache! The raw dried  ones are  best to use for boiled peanuts or pop them on a baking dish and enjoy some roasted peanuts. Roasting them in the oven, and enjoying a Coke to wash them down – now that’s a good ol’ Southern treat. Hey did you ever pour salted peanuts, usually the ones out of a bag, in the bottle of a Coke? Well did ya? Now that we generally don’t have bottles anymore, I guess there’s many of you who will never be able to experience that little treat, but it’s still in my memory 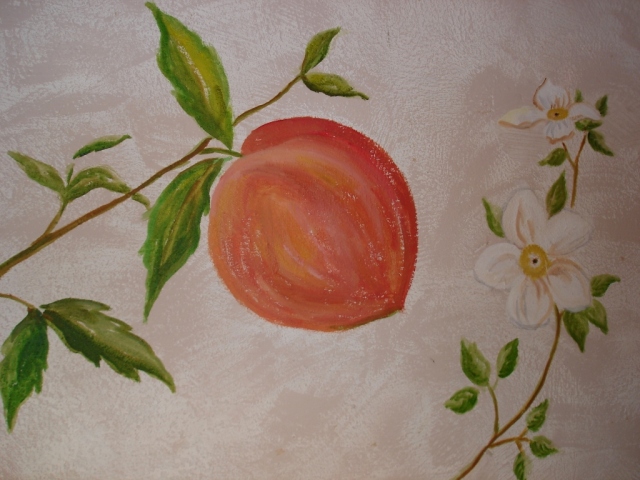 A peach I found painted on a wall!

Peaches are a big crop in my state of Georgia and there were a couple of peach packing plants near where I grew up. Many of my classmates worked in those peach plants during the summer  – it was so hot working there! In thinking about peaches, I can close my eyes and see the most perfect peach – and if I could turn on the smellovision here – well you’d know what I’m talking about. I’ve often been referred to as a Georgia Peach when people  learn where I’m from – I might not always be that sweet, but…

My grandmother made peach pie, but my favorite is peach cobbler – it’s so easy and so so good. It’s one of my favorites to order when we eat out – especially in Georgia. I love finding a good buffet down there so I can taste all my favorite desserts at one time. But it’s terrible afterward as you end up feeling more like a stuffed turkey.

Irish Potatoes and sweet potatoes were always plentiful around our house – both grandparents grew them and had hills where they buried them after being harvested. Granddaddy McKinley also had a root cellar where he stored his vegetables for the winter. I can never correct my mama on the name, but she still says Iced  Potatoes instead of Irish – I just laugh!

Did you ever hear of Pear Preserves? Grandmama McKinley had a pear tree in the field , out by those horse apple trees, and they were only used to make the preserves. Mama said it was their candy and grandmamma kept them in a crock on the kitchen counter. I’m told the pears were cut in slices, layered in a pan and covered with lots and lots of sugar. They sat overnight in the cooking pot and she began the cooking process the next day; they cooked down in a thick syrup and were really sweet. I loved to lay them on my toast. Why have I not tried making them?

Well I think I’ll call it a night as my peepers are closing. Do come again and please leave me a word or two on your likes or dislikes.

But first, I think I’ll amble on in the kitchen and grab a Coke to pour my salted peanuts  in…. anyone wanna join me… Come on…. I’ve got an extra Coke!

My blog is at: https://everyonehasafamilystorytotell.wordpress.com/
View all posts by Jeanne Bryan Insalaco →
This entry was posted in 2016: Blogging from A to Z Challenge, Daily Writings and funnies... and tagged A to Z challenge 2016, Georgia, mama, Peach cobbler, peaches, Pecan Pie, Pecans, Perry Georgia, Siloam Georgia, southern. Bookmark the permalink.