Letters & Papers from the Trunk in the Hall:

Will write you a few lines tonite, Saturday. You know we are all well and let you know I received four letters from you today and Helen got one, but they were written Jan.3, 12, 14, 13, and Helen got one Sat., 13th. I had a V-Mail letter Saturday, Feb. 17th, written Jan. 29. I was glad to get them.I sure was sorry to hear you haven’t received your boxes yet and I mailed one the first of Nov. I sure hope you will soon get them.There was a fruit cake in the first one and some cigars, it was in a tin box. Leroy, you said your wife wanted you to come to Wisconsin to live. I think it’s best to come home first. When will you get back to the states, I sure hope it won’t be long before you can come back because they might just talk you in to do something you would be sorry of and I …… You have got your divorce now but she won’t sign the paper again like she did this time. She was sorry she signed it this time. No I haven’t heard anything from her.Yes, J.W. and Helen and James William is all right. And Alton, Martha Ann and Irene is just the same. Walter got to farm……. He was called and passed up. Yes I heard about Lois Brown marrying (sp?) Marvin Copland (?) and June Chanell also is to be married in the paper I sent. Yes Leroy it was nice of you to think about Dad and offer him the money. I was glad to hear you say you’d changed. I have prayed a lot for you to stay that way and trust in the Dear Lord and pray for you and all the boys. Hope you will write soon and get your box and things will be alright. I sure hope and pray this will find you well and in good health. Dad and Helen also send their love and best wishes. 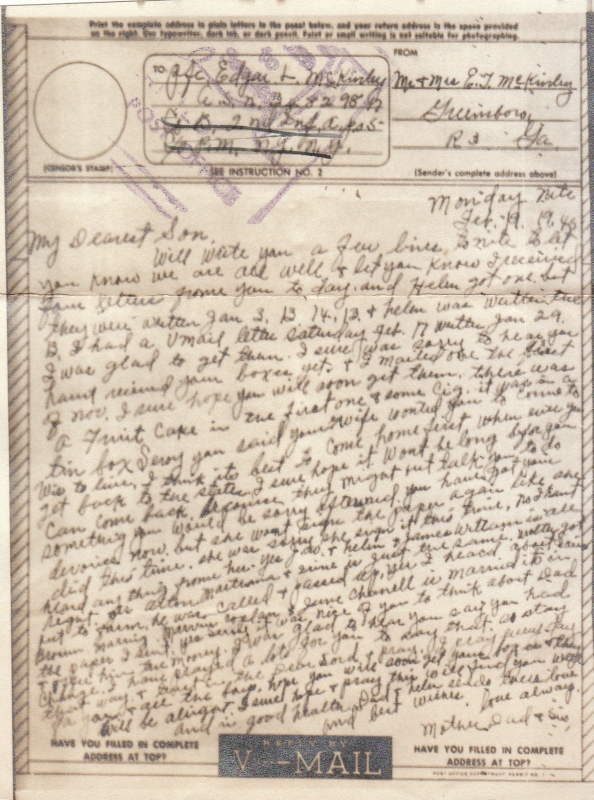 I find it strange, odd, difficult… to read a letter my grandmother actually wrote. By the time I was old enough to communicate with her – her communication skills were almost gone. After Leroy was killed in the war, she slowly drifted away from everyone and lived in a different world. To see her write and think in a letter is strange to me – it’s knowing another part of her I never knew.And being a mother with children and grandchildren, I can understand her worries.

To actually have a V-Mail letter from home, that was in his possession, is considered rare from my research on V-Mail; the soldiers were suppose to dispose of their mail. But this letter most likely never even reached him! If I’m reading the date correctly on this V-Mail, it was written to him – on the very day he died – Feb. 19th, 1945. From a 1945 calendar I found, Monday night was Feb. 19th.

It seems V-Mail wasn’t as fast as I read it was supposed to be, especially after reading that she received 4 letters in one day – all dated from Jan. 3 – 14; that is a long time frame. I’m sure she was happy to receive so much mail, but I know it preyed on her mind all those days in-between with no mail. It’s not like you could call and talk to them or call their base, like you possibly could today. There was no one to call during WWII – you waited and waited.

I know she was saddened to hear he had not received his fruitcake box as my mother told me that her mother baked him one every month. Mama says that it was probably that same very one that she returned – grandmamma fell down crying when the mailman brought it back. She knew – she knew her son was dead – and that’s what she said as she cried laying on the ground; her fears had come true.

Grandmama’s words read worry – worry that her son would not return home and possibly go to Wisconsin to live with his wife; the girl he met and married before shipping out. I’m sure that caused my grandparents much grief, especially my grandmother; too many boys married quickly before shipping out. There were many girls who latched onto those boys and married them – hoping they wouldn’t return, just so they could collect, but from all I’ve read, I don’t believe Catherine was one of them – I believe she loved Leroy or they thought they loved each other. Regardless, she signed the divorce papers, but then begged him to believe she had not really wanted to, but did it because he asked. After she learned of his death, she made sure that my grandmother received all his belongings and insurance money; she felt nothing should come to her. (Letters from Catherine later will tell her story) I do have hesitation on sharing them, but time has passed and I don’t believe there was any wrong doing – they both were caught up in the movement of the war – as so many were. The boys needed someone to leave behind – someone to write love letters to – someone to come home to. If that helped them – what was so wrong; unless the girl they left had intentionally married for all the wrong reasons.

Her news mentioned a Lois Brown marrying a Marvin Copland; my mother remembers possibly that Lois had married a Roger Walker – brother of Bill Walker who owned the City Hotel. I have  a postcard from Lois to Leroy’s parents telling that she saw him off on the train and all went well. I hope to find out who she married – I have wondered if she dated Leroy, was she possibly a girlfriend, or was she just a friend. (Mama told me that she thinks Leroy dated her a few times. She was not a local girl, as she lived at the City Hotel in Union Point during the week, and returned home (no one knows) on the weekend to her family. Leroy had a girlfriend for awhile before going in the Army named Grace, but for some reason they broke up before he left. That puzzles me, as mama tells me he really loved her; maybe he had thought it best, not wanting to make her wait for him. 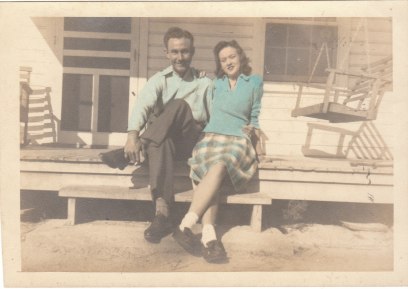 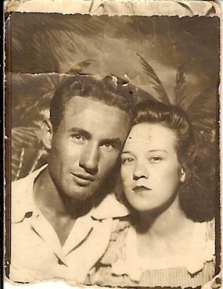 I’m not sure if this is Leroy home on the “only” leave he had before shipping out, or was this photo taken before he left? Either way, I still don’t know the identity of this girl – although she is the same one in both photos. Could this be Lois Brown or Grace? Maybe one day I’ll be able to identify her.

I guess money was tight on the farm, as grandmama thanked Leroy for sending his father money; he was still thinking of his parents while fighting a war with an ocean between them.

You can tell from her words of prayer of just how much she loved and missed him. So sad to see a mother write her son – her only son. I’m sure she would have written much more, but those V-Mail  letters kept it to a  certain amount of words, and writing really small to fit on the sheet. They actually sold V-Mail magnifying readers to fit over the paper. I could have used one of them!

To Read More in the Trunk: Letters and Papers from The Trunk in the Hall

If you would be interested to read the history on V-Mail, see a previous blog post where I shared its history – WWII: The History of V-Mail.

P.S. – The “Trunk in the Hall” will be an Heirloom post in the future.

My blog is at: https://everyonehasafamilystorytotell.wordpress.com/
View all posts by Jeanne Bryan Insalaco →
This entry was posted in Daily Writings and funnies..., Letters and Papers from The Trunk in the Hall and tagged City Hotel, Edgar Leroy McKinley, Germany, McKinley, Siloam Georgia, Union Point Georgia, V-Mail. Bookmark the permalink.