When “heirlooms” aren’t identified, and their stories never told, then they often become items that are tossed or sold – as they have no history, no ties to the family. So take the time to identify your family heirlooms history and memories so your treasures aren’t tossed in the trash. They are just as valuable as your family photographs and also need to be documented. Sometimes it’s not even the value of the item in question; it’s the story which holds the value.

The Cupid and Venus Pitcher 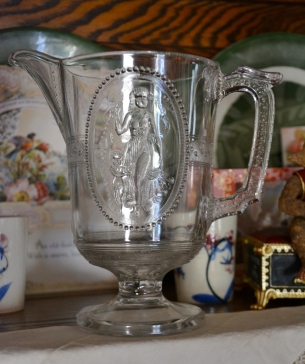 This pressed glass pitcher was dug up, with only a spoon, by my mother while helping to clean out the home of my great grandfather William C. and Evie Bryan (step great grandmother); Evie was his second wife and had recently died.

I always found it odd when I learned where mama exactly discovered the pitcher – under the car shed – buried in the dirt; she spotted just the glass lip sticking up out of the dirt floor. Being very curious as to what was buried there, and armed with only a metal kitchen spoon, mama began digging.  What was more surprising was when she lifted it up – it was intact with no chips or cracks. How or why it was buried – well that will never be answered.

It’s such a beautiful pitcher to not have been used, it must have a story. At one time it must have sat on their table, but what prompted someone to throw it away. I can only assume why, but I choose to think of the good times my pitcher must have had. 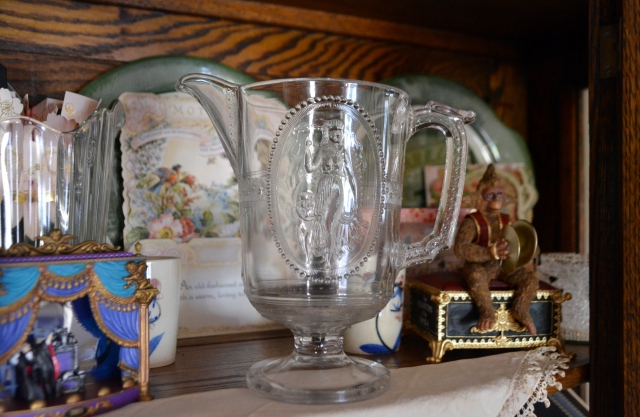 This pitcher sat for years in my china cabinet before I learned the name of the pattern pressed on the glass; that discovery was at the Brimfield Flea Market in Massachusetts when I found a compote pedestal bowl with the same pattern. The dealer enlightened me with the company history and the pattern name  – Cupid and Venus – a pressed glass pattern. Needless to say, that compote came home with me to sit alongside my pitcher – it needed a friend. My daughter has laid claim to these two pieces. 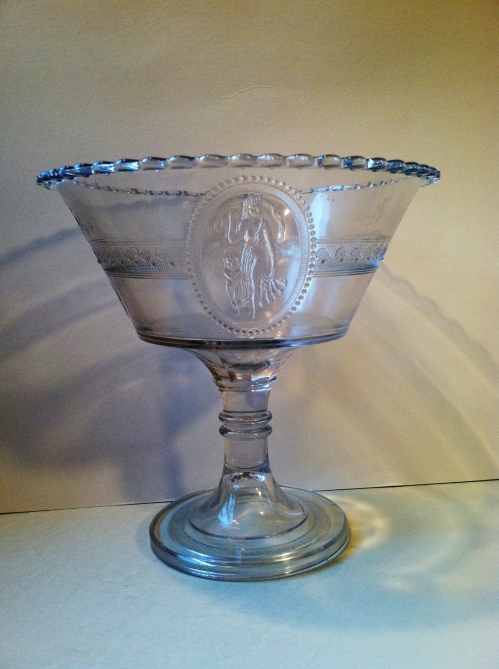 It makes me happy that she’s interested in the family heirlooms, as when I was young, my mother always said, “I’m saving all this for you,” and I answered  “I don’t want them!” What must she have thought! But, after I married, I began looking at them in a different light – and soon – wanted it all!  My husband and I loaded all my new re-discovered heirlooms in a U-haul to bring to Connecticut.

In researching the manufacture of my Cupid and Venus pitcher, I learned that The Richard’s & Hartly Glass Co. were established in Pittsburgh, PA. in 1869 by Joseph Richards and William T. Hartly. They first began producing glassware in the 1870’s and 1880’s and continued to make pressed glass pieces until absorbed by US Glass Co. in 1891. Most of their pieces were produced in clear flint glass, but they also produced amber and Vaseline pieces.

Pressed glass was first made in the U.S. as early as the 1820’s after the invention of the glass pressing machines. There were less than twenty factories making pressed glass from 1830-1850; it reached great popularity between 1850-1900.

My blog is at: https://everyonehasafamilystorytotell.wordpress.com/
View all posts by Jeanne Bryan Insalaco →
This entry was posted in Friday Night Family Heirlooms and tagged cupid and venus, heirlooms. Bookmark the permalink.