Writing the stories of the family heirlooms I’ve been entrusted with, has been on my mind for a long time; the time is now and I plan to write their stories on a weekly basis. I also put a call out to my fellow bloggers to join in with me in sharing their family treasure stories as well.

When “heirlooms” aren’t identified, and their stories never told, they often become items that are tossed or sold – as they have no history, no ties to the family. So take the time to identify your family heirloom’s history and memories so your treasures aren’t tossed in the trash. They are just as valuable as your family photographs and need to be documented. Sometimes it’s not even the value of the item in question; it’s the story which holds the value.

I’m starting my heirloom stories on Friday night as that was the night we often arrived at Granddaddy McKinley’s farmhouse – and that was the night he took the lantern out with him. That was fox hunting night – and he never missed it! I think even the dogs knew what day Friday was, and whenever he backed out the truck, they started their yapping and prancing in the pens – just waiting to be loaded in the back of that old pickup. I remember being jealous of them getting to ride in the back of the truck; I climbed back there once but he quickly shooed me right out! To a young girl, who adored her grandfather, it sure looked like a fun place to be.

To many, this could be just another lantern, but every time I look at it, I remember the farm and it sitting on the table – just waiting for granddaddy.

Long before electricity was brought to his farm, and believe me he fought that “tooth and nail,” as mama tells it. You would think that everyone would want the flick of a switch to have light, but not granddaddy. I believe he trusted that lantern more than any new fangled light with a pull chain. 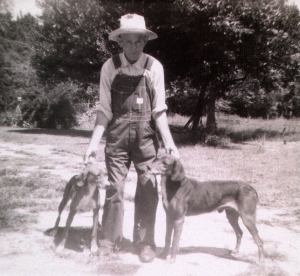 Granddaddy with his two favorite fox hunting dogs – Smoker and Bill. He lived for his dogs!

The lantern was his flashlight and the first thing he grabbed on Friday nights when he headed out for a night of fox hunting with the local men. Funny thing though, I never remember any foxes brought home,  but Mama remembers him bringing a baby fox home once when she was young. She said he rescued it before the dogs got to it – he had a big heart for animals; he never liked to let you know he had that big soft spot though.

Long before grandmamma could pull that light chain on the bulb dangling in the center of the room, it was the trusty lantern that gave her light to piece quilts at night, read stories to my mother and crochet one of the many doilies she made. There was no time during the day for those things; they needed to be done by the light of the lantern at night.

Mama laughs every time she tells about when the electricity was installed – grandmamma could never get used to pulling a chain to turn the light off and continued to try and blow out the light; it always gave my grandfather a chuckle. He had a dry sense of humor and often thought things funny, like if he struck a match to light the lantern and she walked by – well the prankster in him couldn’t resist reaching over to stick that just struck matchstick to her leg – just to see her jump!

I hope I’ve encouraged you to dig through your family heirlooms, one by one, week by week, until all their stories are told. Don’t let them be tossed! You don’t want the flea market or antique hunter picking up that item – and saying – gee, I wonder what the story was on this?

My blog is at: https://everyonehasafamilystorytotell.wordpress.com/
View all posts by Jeanne Bryan Insalaco →
This entry was posted in Friday Night Family Heirlooms and tagged family heirlooms, fox hunting, lantern, telling the story. Bookmark the permalink.