MEMORIAL DAY – WHAT DOES IT MEAN TO YOU?

What does it mean – to You?

Memorial Day is always celebrated on the last Monday of May – a day of remembrance of those who gave their life serving their country; originally called Decoration Day, so-called because of the decorations left at the gravesides. Federal law changed its name to Memorial Day in 1968 but it didn’t actually take effect until 1971.

Unfortunately – many people associate Memorial Day with a three-day weekend from work, parades and picnics and the beginning of summer. WE need to not forget the true meaning of Memorial Day. It is a day to pay tribute – a time to pause and remember your family members and all who gave their lives. American flags are placed on every soldier’s grave in remembrance of

their sacrifice for the country – for Your freedom.  Take a few minutes on the way to your parade or picnic and view all those flags at the graves – and remember it was those brave men and women who put their life on the line for YOU!

Memorial Day has taken on a new meaning to me since I began researching and writing family history. And until I began researching my uncle, Edgar Leroy McKinley, for a blog post – I never knew about the many military cemeteries abroad where many are buried; often buried on the same foreign land they fought on. Leroy proudly and bravely lost his life in 1945 on a battlefield in Belgium – so we may be free. The price of our freedom comes at a high cost – the cost of many young American lives. Until this research, I only knew of Arlington Cemetery. 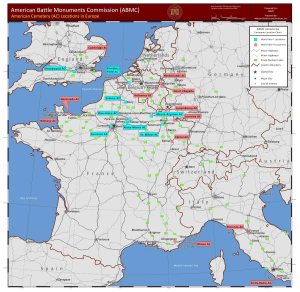 On this Memorial Day I’d like to share my new knowledge with you on the American Battle Monuments Commission (ABMC).  They operate and maintain 25 American military cemeteries – and all are located in 16 foreign countries. These cemeteries commemorate the American service and sacrifice of all our American service men and women who served during WWI and WWII.

The ABMC is an independent agency of the United States government and was created in 1923. President Warren G. Harding appointed General John J. Pershing to chair the agency and he remained in that capacity until his death in 1948.

The Civil War (1861 – 65) marked the beginning of the important changes in how the military handles the death and dying. But, the one thing that was different in this war – is that they all died on our land – the wars that followed were oceans away.

By the time WWI was ending, the United States leaders hesitated to put a recovery effort in place. More than 70,000 men were buried in temporary battlefield graves, with only wooden crosses. There were no plans in place for returning these men home until the families sent telegrams asking when their sons were coming home.  General Pershing and many of the military leaders argued that burying the men where they fell offered them the greatest glory, but thousands of American mothers and fathers argued against that point – and won!

By 1919, the War Department finally came around and sent surveys to each of the fallen soldiers’ next of kin. Our U.S.  allies strongly opposed the idea of us digging up the dead to ship home. The British were afraid that their people would soon demand the same thing for their soldiers; their count was over 700,000 lives lost. The French argued that they needed to focus their time on rebuilding their land and banned removal of all bodies for three years. That did not sit well with the United States, and the mothers of loved ones buried temporarily there; by late 1920 they caved in to the American pressure and the ban was lifted – our boys came home!

It was a two-year project in bringin them all home, with a cost of 30 million; over 46,000 soldiers were returned home per family requests, while 30,000 soldiers remained and laid to rest in one of the military cemeteries in Europe.

After WWII, a total of 359,000 dead Americans scattered in temporary cemeteries awaited word on a final burial; it turned into a 6-year recovery effort to bring home over 281,000 of our fallen Americans.

During the Vietnam War soldier’s remains often reached home within a week and today the bodies are home within days.

I hope you will take a moment to view a few of these cemeteries and memorials I learned of and find them as beautiful and interesting as I did. I would so love to go and walk through each and every one of them with my camera. It is quite peaceful to walk through a cemetery and view graves and reflect on lost lives. 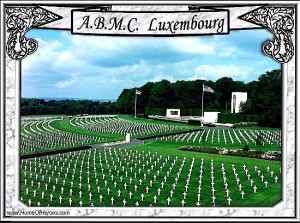 The land on which these cemeteries are built, were graciously donated to the United States by those home-countries.  There aren’t enough words to describe how beautiful and serene the cemeteries, monuments and grounds look online. Most of these cemeteries and memorials are located on or very near the actual battlefields of where our brave soldiers lost their lives. Many are only memorialized on a wall, as their bodies were never recovered, such as the famous Sullivan Brothers and the well known band leader Glenn Miller. 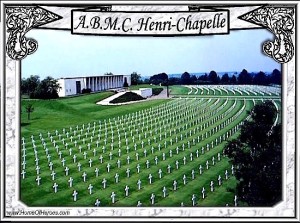 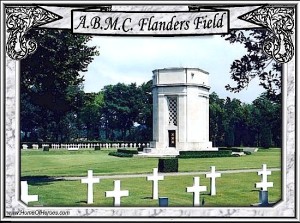 As my uncle was killed in Belgium, I might assume he was once buried either in one of the two cemeteries in Belgium, Henri-Chapelle or the Flanders Field Cemetery, but the nearby Luxembourg American Cemetery is also another possibility. It was several years after the war before the Army returned him home for a private family burial which devastated his mother – he was the only son. It was from the Belgium cemetery of Henri-Chapelle that the first shipment of American casualties first returned to the United States – finally going home! This long repatriation process began in 1947. In learning this information, I feel now that my Uncle Leroy might have been temporarily buried in this cemetery as he returned home around that time.

I recently watched a documentary entitled “Hallowed Grounds” on PBS (CPTV) and found it quite moving and informative. In the Sicily-Rome cemetery, a complete bomber crew is buried side by side. A “Brothers in Arms” statue stands in the center and 23 sets of brothers are buried side by side. It must be quite over-whelming to walk by those graves. You cannot watch this documentary and maintain a dry eye – I didn’t! (It re-airs on June 2, 2015)

“The Statue of Brothers (Seoul War Memorial)“. Licensed under CC BY 2.5 via Wikimedia Commons.

The ABMC cemeteries have been closed now for several decades, except when the missing remains of a serviceman are recovered. There are over 207,590 buried and commemorated on the Walls of the Missing. They are the true cost of liberty!

During your summer vacation travels, if you have the opportunity to be near one of these cemeteries – make it a stop. And please take photographs to send me along with your stories. I would love to feature them on my blog.

“Lest We Forget” is a pamphlet of locations and informative history and can be downloaded from the Brett Harriman Travel site. It’s a free download E-guide consisting of twenty-one pages; also available on Kindle for 99 cents. Brett Harriman’s travel site has much interesting information – take some time and look around at the history and photographs there. There was so much more I wanted to blog, as I found the cemeteries and the history so interesting, but if you read the “Lest We Forget” pamphlet, you will learn all! Another informative article written by Brett Harriman was featured in Stars and Stripes – it’s a must read. Thank You Brett for allowing me to feature your information and photographs.

“Thank You For Your Service” to my immediate family of…

2 Responses to MEMORIAL DAY – WHAT DOES IT MEAN TO YOU?