Out with the old and In with the new – Happy New Year!

Well day 365 has finally come – and it’s been a long year for me in trying to maintain my 52 weekly ancestor story blog. But I did it – posting my final “sniff-sniff “ story just the other day. Hope you didn’t miss it?

In as much, as I’ve never been a fan celebrating the New Year – I always looked forward to the call I received at midnight from my father, wishing me “Happy New Year.” My father has been gone thirty two years, but I still miss that call and always remember. Daddy will be celebrating with many of his friends tonight, but I’ll still hear his “Happy New Year” at midnight.

I grew up in the South celebrating New Years day eating turnip greens, black-eyed peas and cornbread; a tradition passed down from my  grandmother. If you’ve grown up in the South – you definitely will be enjoying these foods. No Southerner would dare to not serve! Wouldn’t you eat greens and peas if someone told you it would ensure wealth in the New Year?

Some traditions are those things you just don’t dare stray from – you feel compelled to keep them in place and look forward to them annually. After all, you don’t want to jinx yourself in the beginning of the New Year.

My mother had several superstitions around this time of the year that we always abided by. Our Xmas tree and decorations must be taken down and be out of the house before the New Year comes. She always said it was bad luck to have the old tree up in your house – in the New Year.

Mama learned all these traditions from her parents and remembers them always said and done. Her mother believed that you didn’t sweep your house out on New Year’s day or you’d be sweeping out a family member. You didn’t do laundry or really any work on that day. But why would I go against tradition – sounds good to me; I can be happy doing nothing tomorrow.

It’s also told that if a woman comes to your door on New Years day, you don’t let her in as it’s a sign of bad luck. So if any female comes to visit tomorrow, she’s not going to be able to come in. Mama laughed in telling me this and when I asked “would you let them in” – her answer was a definite NO. If everyone had the same rules, then they all knew that they needed to stay home on this day and rest – no visiting.

Did they really rest that day? Mama said her father’s words were “If the carts in the ditch, you don’t walk away.” Well that sounds like something my grandfather would say. He owned a farm, if there was something that needed to be done, whether it was Sunday or a holiday, he took care of it.

In wondering why specifically black-eyed peas were considered one of the lucky foods chosen I read that it dated back to the Civil War. The story goes that those specific peas were not a food that General Sherman’s Union Troops considered food worthy. When they raided our Confederate supplies, legend says they left all the peas and salted pork. The Confederates felt lucky to be left those meager foods and they survived the winter with them – hence the peas became a symbol of luck.

I’ve also heard some people say they cook with a new dime or penny, or add before serving. The person who finds the coin in their food is considered extra lucky in the New Year. I like that idea and may begin incorporating it for the younger generation. Maybe it will encourage them to eat their greens and peas!

It’s funny how superstitions vary in parts of the country. I grew up in Georgia and always 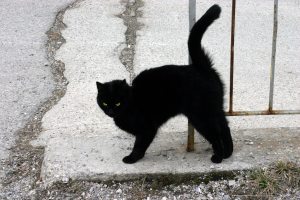 So grab your broom tonight and sweep out your your house so your free tomorrow to enjoy – you don’t want to sweep out any family members in the New Year. And be sure to enjoy your black-eyed peas and greens (of choice) and cornbread to ensure wealth during the year. After all, you don’t want to mess with superstitions!

And on a final note, I’d like to take a few moments to wish all my family and friends a very Happy and Healthy New Year – and if you’re lucky, maybe a wealthy one too. You never know when that scratch-off card you bought might be the winner! But on a serious note, take a moment tonight to remember all you’re blessed with as you ring in the New Year!

Thank You for allowing me to share my sentiments on the last day of 2014 and the first week of the New Year. I may not be writing about family ancestors every week this year, but I’ll be writing weekly stories – depending on what pops into my head. So if you have an idea for a story or a family member you’re interested in – let me know. 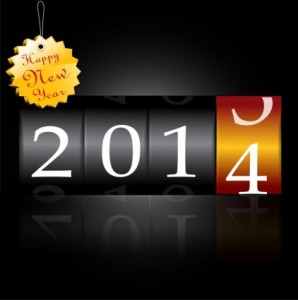 My blog is at: https://everyonehasafamilystorytotell.wordpress.com/
View all posts by Jeanne Bryan Insalaco →
This entry was posted in Daily Writings and funnies.... Bookmark the permalink.

1 Response to Out with the old and In with the new – Happy New Year!