The armistice monument memorial on West Haven’s green was dedicated in 1928. It stands with names inscribed to honor local residents who gave their life in World War I – for our freedom.

This 11-foot bronze statue of a dough-boy soldier faces Main Street (north) and stands high on a granite base; the statue holds a rifle in one hand and a helmet on the other arm. (The origin of the name “dough-boy” varies, but it seems to refer mostly to the infantry troops of the Civil War. The U.S. troops took a liking to it, and  soon adopted it as their nickname.)

Anton Schaff is the sculptor of the West Haven dough-boy monument; he is also known for creating several war memorials in New York and New Jersey, and several Confederate bust statues at Vicksburg National Military Park.

The front plaque on the North side features four military figures, that represents soldiers, an airman, and a sailor opposite four civilians laborers. The dedication reads “To the memory of those who gave their lives in the Great War 1917-1918.”

Beneath the dedication is the American’s Creed. 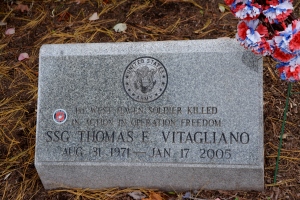 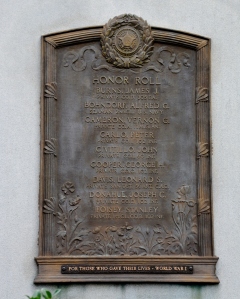 My blog is at: https://everyonehasafamilystorytotell.wordpress.com/
View all posts by Jeanne Bryan Insalaco →
This entry was posted in Connecticut - War Memorials and tagged West Haven Green. Bookmark the permalink.